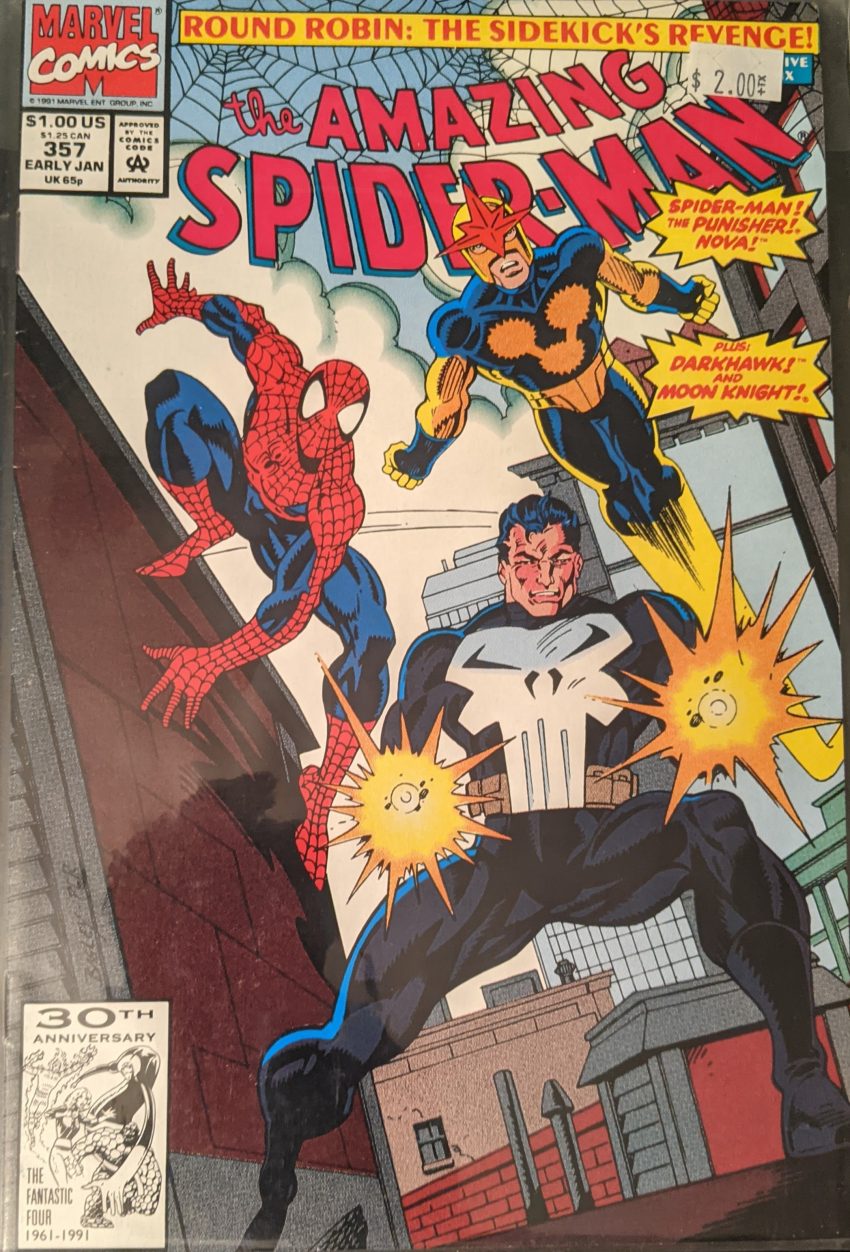 PCR. I have to assume that’s the great P. Craig Russell inking this cover. The looseness of the approach would bear that out. Interesting choice on Spidey’s mask. Russell’s one of those guys whose involvement in superhero comics was always so bizarre. Like so many before him, he worked on superheroes because that’s what comics were about, but thankfully, he gets the chance to do a lot of other things, more and more so as time goes on. But his stuff is so whimsical and well-suited to fantasy and things like that, and yet he finds himself inking this or drawing Robin 3000 for DC or whatever. An odd fit. Anyway, in much less exciting news, we have the rest of this issue to look at. I wonder if the heroes will fight Midnight only for Midnight to escape again? Bags just doing layouts this time. We begin with 2 pages of furious recappin’, during which Spider-Man says it’s bad guys 3, good guys “zero, zip, nada, a bagel. In this case: A BAGEL WITH NOVA,” getting to the weird title promised last issue. We learn Punisher rather improbable slipped away, knocked out and replaced Number 3 on the escape ship. And how’s gotta play the role.

What would possess The Punisher to uncharacteristically crack jokes at a time like this? Punisher slips away from the group and passes out immediately. We rejoin the heroes for still more recapping, Moon Knight and Night Thrasher yet again yelling expository things at each other about Midnight and Nova as an “argument,” Spider-Man breaking it up. The heroes promptly decide there’s nothing they can do right now and split up, saying they can contact each other if they learn anything. I mean, on the one hand, that’s kinda funny, but on the other, they are kinda stuck. I guess. Why neither Spider-Man nor Moon Knight thinks to use that Avengers ID card they’re using to keep in touch to, like, call The Avengers is beyond me. I think Tony Stark has the resources to track that rocket, but what do I know?

I’m sure this story’s lack of supporting cast is motivated by how overstuffed it is with heroes and by Milgrom not wanting to step on any long-running plots, but it sure hurts the experience. Moon Knight goes home to his gal, Night Thrasher goes home to punch some kinda wooden boxing target and complain to his gal. Gals, gals, gals. Speaking of which:

Punisher puts a knife in the tubes running to one of Nova’s hands and tells him to break loose and contact Thrash while Punisher stalls Midnight at their secret meeting. When he goes to said meeting, Midnight talks for a couple panels, but it’s just words to fill space. There’s no grand plan. The plot of this book is really light. The plot is “a lot of fighting.” Nova breaks out and smashes their radio jammer, theoretically able to get a signal out now. When the alarm goes off, Punisher begins a rebellion against Midnight’s rule among the hooded guys as a distraction. As Midnight beats them all up, Dr. Franklin thinks this might leave a power vacuum for him to fill. Why would you want anything to do with these clowns? Even The Wrecking Crew seems like a better bet. Soon, only 1 hooded doofus is still standing, and it’s Punisher, of course, whose cloak is shredded by Midnight’s extend-o-arm and claws.

Wah wah. But wait, you know what this book needs?

Another main character! Yes, Darkhawk couldn’t just be in chapter one. Back at the compound, it’s Punisher vs. faceless goons and Nova and Midnight fighting in the air above them. It’s not going too well for Nova (The guy has spent the last few issues being drugged and tortured, after all), and Punisher’s not doing well yet, either, but lucky for them, Spider-Man comes crashing through a skylight.

“Not THESE guys again!” Scintillating dialogue.

Darkhawk shows up to fight The newly-armored Thunderball, but he grabs that cable holding his, uh, ball and get a zap of electricity down it for his trouble. He’s shocked pretty bad, but Spidey grabs him as he begins to fall, only to be chased by Midnight. Then Midnight gets a flying kickin in the face from Night Thrasher, who I only just realized hasn’t used his skateboard once in this, and that sends him crashing to the ground to fight Moon Knight for a bit. But then, Nurse Church throws Moony across the room like he’s nothing.

I guess I shoulda seen that coming. I was really aiming too high by guessing she’d be Number One or something. Just another cyborg. So, then, 6 superheroes vs. 3 villains and their goons. Doesn’t seem like much of a fight, but we’ll see it next time.