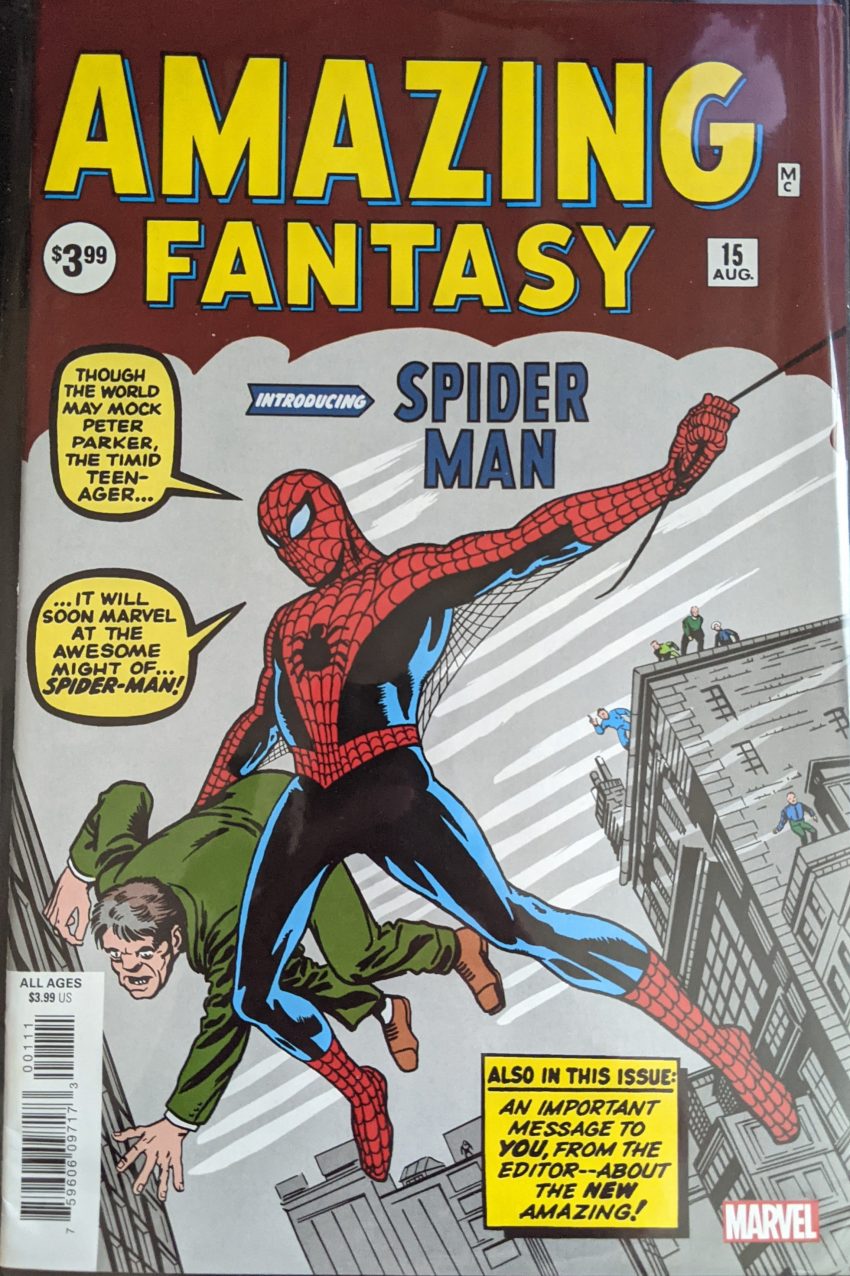 Finally, 6 issues into this block, we get to the first Spider-Man comic. Get ready for a long-winded post. I imagine most people with any interest in Spider-Man are familiar with this story in some capacity, though maybe not the original printed version. Obviously, I don’t own one, as even a disintegrating garbage one costs thousands of dollars. One time, at Heroes Con, we noted a booth with a sign on it that said you could buy the whole booth for $24,000, or $12,000 without “AFIS.” We wondered what that meant until we learned it was AF 15. This comic was half the value of the entire stock that guy brought to the show. And it gets way more expensive than that if you have a nicer copy. But I have this fine thing, instead, the 3rd of the “facsimile edition” program to appear on the blog (After ASM 129 and Howard the Duck 1). It’s just credited to Stan Lee & S. Ditko. Who colored and inked it? Maybe Ditko inked himself. No idea. Page one lets us know this is the story of a costumed hero who’s a little different as we see some kids needing “one more guy for the dance,” with some unnamed teens who’re probably Flash Thompson and Liz Allen mocking the idea of inviting Peter Parker, “Midtown’s only professional wall flower,” and he is standing, like, right behind them. Very cool, guys. Honestly, between this story being so short and so well known, it’s weird to try to skip pages.

I have wished these so-called facsimile’s were on more appropriate paper in the past, and do so again. As this is just one short story out of several slated for this issue of Amazing Fantasy, as was normal for Marvel comics of the time, things move really fast. In a single page, we meet Aunt May, Uncle Ben and Flash Thompson and establish Peter has a good home life and no social life. And there’s the unnamed scientist Fabian Nicieza would name Eric Schwinner in The Final Adventure 1 some 54 years from this.

There’s the famous moment, along with the hilarious open air radiation experiment that would continue to pop up in Spider-Man comics (A plot point as recently as 2018). The hostility Peter faces from every corner is kind of insane. I mean I know people can be mean, but this guy’s a magnet for unwarranted aggression. To his shock, Peter climbs up the side of a building, accidentally crushing a steel pipe when he grabs onto it. He decides the spider bite must’ve given him extraordinary abilities, and thinks to himself he has to plan what to do with them. He walks bast an exhibition offering $100 to anyone who can stay in the ring 3 minutes with wrestler Crusher Hogan, last seen on the blog in ASM 271, and thinks it would be a good chance to test himself, but he’ll need a disguise.

Just like the cartoon theme song! Note the missing hyphen. As mentioned in ASM -1, the idea he was already working on a web shooter before this does kinda help it go down smoother, but it doesn’t quite work with the text. In Part 2 (A story this short having chapters is crazy), Spider-Man stars in some kind of TV show. It almost seems like it’s just a show about him, but all he does is show off his powers, never speaking, until his manager calls him off stage. But the crowd is amazed and the act is a success.

It’s interesting that they chose to have him live with an aunt & uncle without mentioning the question of his parents at all. Seems like an odd choice, but it worked out. It’s also really very interesting to create what is theoretically a superhero, but not have him dedicate his powers to Truth, Justice & The American Way or what have you. It’s hard to overstate just how different Spider-Man was at this time. But, well, as everybody knows…

With the infamous pupils in the mask and everything. The rest of the book, dutifully reproduced here, is 3 stories of the usual Amazing Fantasy fare, low rent Tales From The Crypt and Twilight Zone-type stories by Lee & Ditko. But this is how things got started for our hereo.

So, everybody knows the origin of Spider-Man. But what is the origin of Spider-Man behind the scenes? That’s a debate no one will ever truly resolve. Depends on who you ask and all the primary people you would ask are dead. There’s the Stan Lee version, the story of how he had this idea for a teen hero with a spider theme, but publisher Martin Goodman said no one likes bugs and rejected it, so he “snuck it into the last issue of a book that was about to be cancelled, anyway.” That’s the most widespread version.. But none of that is true. I mean, you don’t have to be a comics historian to see the note on the front cover and at the end of the story indicating Spider-Man wasn’t going anywhere, the idea that he was “snuck into” a book he was on the cover of doesn’t hold up to much scrutiny. It’s easier to say what isn’t true than what is a lot of the time, when it comes to the origins of Marvel characters. But here’s what seems to be true to me, after doing a whole lot of reading on the subject. This version is sourced from several places, such as Mark Evanier’s Kirby: King of Comics biography, and The Jack Kirby Collector #75. It also largely seems to be what Marvel Executive Editor Tom Breevort believes to be the case, so I feel pretty good about it.

What most likely happened is, Jack Kirby came to Stan Lee with an unused character from his long partnership with his Captain America co-creator Joe Simon, The Silver Spider, to be retooled into a Marvel character called Spiderman, no hyphen. This would’ve been a much more Jack Kirby character, a burly, Captain America-esque guy with a web gun instead of a shield. But some aspects of Spider-Man existed, such as living with his elderly aunt & uncle. Kirby Collector #75 has Steve Ditko in 2 written sources saying he saw several complete Spiderman pages by Kirby when he was brought into the project. Why was the Kirby version scrapped? No one knows. One theory is the character was too similar to the hero The Fly at Archie Comics (Ironically created by Simon & Kirby and featuring a spider-themed villain). This was 1962, Marvel was still a scrappy little entity almost wiped out by the dark times of the 50s, and didn’t want to risk a lawsuit. But, whatever the case, Jack’s version was shelved, Lee brought in Steve Ditko, and Ditko created (At the very least) the visual design of the Spider-Man we know, hyphen and all. On his blog, Tom Breevort points out how the “Spider-Man” logo on the first page of this story is a paste up over a “Spiderman” logo. Why the late addition of a hyphen? We’ll never know. Maybe it looked too much like Superman at a glance. But, that’s how we got to the story we’re looking at today. Kirby doesn’t get any credit from most sources for Spider-Man, but he got the ball rolling. Later in his life, embittered by the way the industry had treated him his whole career, and also known for his notoriously bad memory, Kirby started telling people he created Spider-Man, and has been ridiculed for this in some circles. But, as usual, the truth is more complicated than the legend. Interestingly, Ditko’s cover for this issue was rejected in favor of the iconic Jack Kirby cover that it went to print with. This cover is by far the best drawing of Spider-Man Jack ever did, and probably was the better choice for promotional purposes, although I’d humbly submit the Ditko version is more indicative of the spirit of the character as he would develop. It looks like this:

But, there we have it. It’s strange to go back to the very beginning this late in my reading. I mean, we’ve already seen the burglar return and die, and even met his daughter. But that’s just how it goes. Next time, another detour.