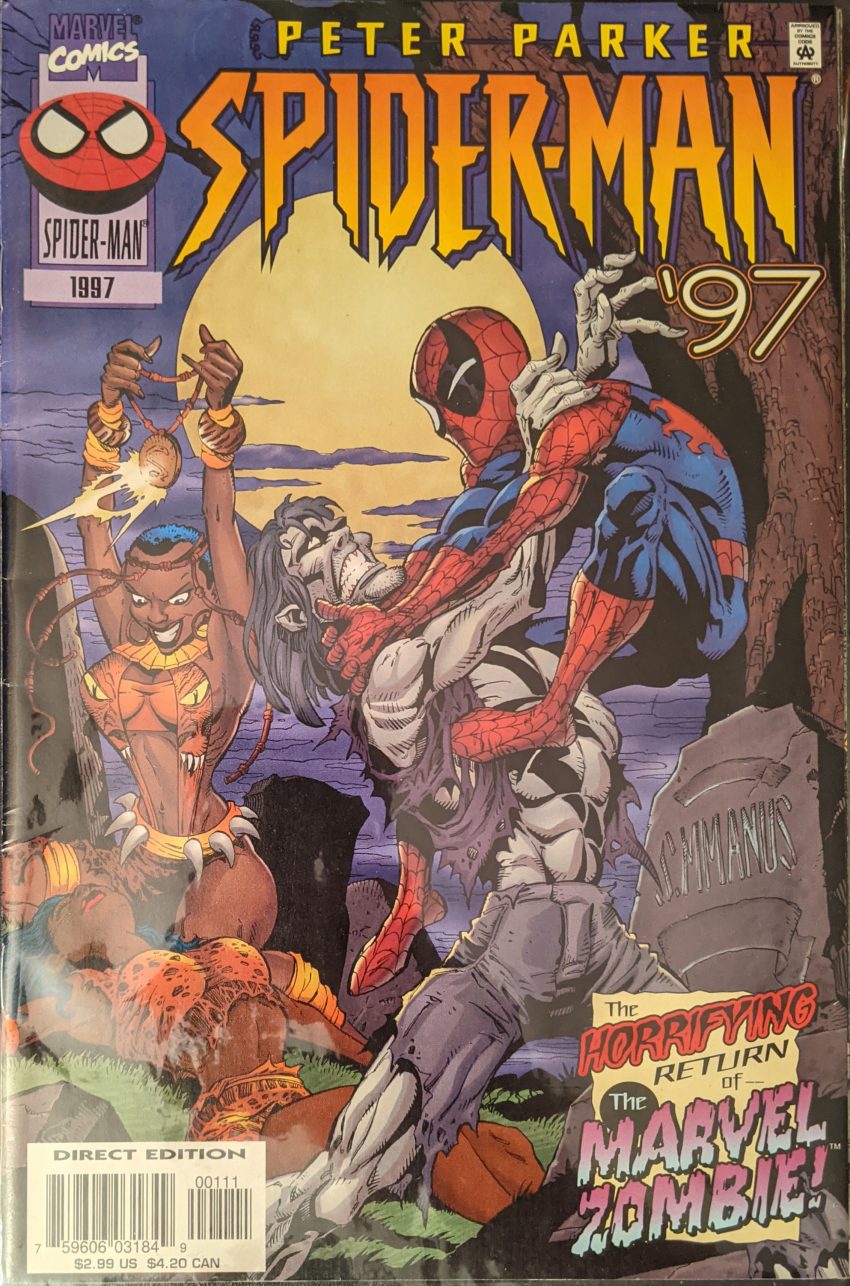 Oh boy. I think this is Calypso’s first appearance since McFarlane’s first arc, some 7 years later? That seems almost impossible. And… The Marvel Zombie. In the 70s, when The Comics Code loosened its restrictions and comics could publish the word “zombie” again (Really), since Marvel already tended to call its fans “Marvel Zombies,” it was a no brainer to introduce a literal zombie who was, then, The Marvel Zombie. He appeared in one of their more mature, black & white magazines. And that’s literally all I know about him. It’s Glenn Herdling writing, Shawn McManus drawing & inking, and John Kalisz coloring. We begin with Spider-Man encountering a bunch of dudes fighting another dude in a back alley, speaking French. He tries to save the lone guy, but is told the lone guy attacked the others. He is obviously skeptical until the ol’ Spider Sense kicks in.

Next day, Peter, Robbie and an unnamed woman who may well be Ann MacIntosh are talking about the pictures his belt somehow took that were good enough to bring in. He says Spider-Man told him the guy didn’t struggle when he woke up in the hospital. The conversation is interrupted by the arrival of Glory Grant, freshly returned from a week’s vacation and ready to show her vacation pix.

These guys are all pretty well-versed on this topic.

Nice work, Pete-o. Ramon is in Ravencroft, of course, laying on the floor of a padded cell, not doubt just in after getting the tour of “ten best escape spots” when Peter & Glory arrive. Dr. Kafka shows them in, like she’s the only person who works here. She rattles off a bunch of info about believing he’s hopped on up a powerful narcotic. Glory tries to speak to him, and he recoils in non-verbal horror. Kafka says she thinks he believes himself to be dead.

How was fighting those dudes NOT endangering his secret??

Shotgun! The perhaps not-so-creatively-named tough guy created by Ann Nocenti & John Romita, Jr. in their seminal Daredevil run. Not the last we’ll see of him around here, either. And Peter just lets that be that, as we find him in a video store looking for a rental with MJ, telling her Shotgun shut Glory’s front door in his face. Didn’t come back as Spider-Man or anything. He asks if she wants to watch Night of the Living Dead. She does not, and wonders what inspired him to think about that as we cut to a zombie hand coming up out of the water.

You might’ve thought Ramon was The Marvel Zombie, but it’s this guy. He brutally kills all 3 mob guys and shuffles on his way. Back at Glory’s, Shotgun’s helping put it back together after those guys ransacked it, and she’s made him some coffee. He’s curious about the big snake charm she’s wearing around her neck. She says someone gave it to her last night on the cruise, and suddenly remembers he was there.

And she didn’t think to mention any of this to Peter & Robbie??? She says she doesn’t remember anything after that. Shotgun informs her he was there on behalf of the CIA, having been told that drugs were being smuggled into the country on that Hatian refugee boat, but that he saw her sink it. He’s here to arrest her. Well, that’s awkward. As he says so, we see The Zombie’s hand on the balcony outside. In Queens, MJ has fallen asleep watching their movie, so Peter slips away as Spider-Man to check up on Glory.

Spidey is chucked right in Glory’s window, and she is not happy about it. I guess she’s still got beef with him for, like, daring to oppose her werewolf boyfriend back in the day, I never really considered that before. Shotgun sees the Zombie outside and shoots it right off the balcony. Spidey is furious, believing he’s just witnessed a murder, and glory staerts chanting into her medallion in French as they fight a lil’. Then The Zombie climbs back up the balcony, to the shock of both men.

Not the most accurate appraisal of WEB 55, but sure.

Here’s the thing, tho:

So it’s Glory on the cover. I know this’ll be a shock, but I remember nothing about this comic. I’m surprised I even bought it. Maybe it was the implication of Calypso being in it. I looked it up, between Spider-Man 5 and this, she appeared in 3 issues of Daredevil and 2 issues of Web of Spider-Man not yet covered on the blog. Daredevil, huh? Weird, weird place for her to pop up next after the Spider-Man story. While Glory obviously possessed by Calypso does things she’ll probably regret later, Spider-Man has gone back to Ravencroft to report to Kafka he’s run into someone acting just like Ramon who can survive a shotgun to the head twice. He says it was a walking corpse. Kafka dismisses that as impossible. She says Ramon is no doubt suffering from a dose of tetrodotoxin. Spidey says that’s what Kraven used to bury him alive (McManus drawing the wrong suit for the flashbacks), and he knows the difference. Kafka finally admits she’s done a lot of research on zombies, but wonders why a real one would be in New York if they exist. The next day, Shotty and Glory go diving for the wreck. Before they go, Shotgun references what happened last night, which Glory does not recall at all. This is gross. He says if she’s prone to sleepwalking, he’s got a lot of explaining to do, but says he’ll explain when they get back, and they dive in.

Man, this guy gets around.

Uh-oh. Meanwhile, Spider-Man has returned to Ravencroft to find Dr. Kafka’s office in shambles. She says Glory showed up, dressed weird, looking for Spider-Man. When she couldn’t find him, she freed Ramon and left. She also blamed Spidey for the death of her boyfriend, “Sergei,” just in case the reader hadn’t connected the dots yet. In some cemetery, Calypso-Glory is making Ramon dig up her body, which is just fine, and says when the talisman is placed around its neck, she’ll be whole again. But The Zombie shows up to oppose her, for some reason, and she sics Ramon on it. Zombie fight!

Aaaalrighty. Spidey webs the talisman away from The Zombie and tosses it to Calypso-Glory, saying if anything goes wrong, she’ll wish she stayed dead. Then he keeps the zombies busy while she does her thing. It doesn’t go so well, and The Marvel Zombie is about to crush him with a tombstone when he’s commanded to stop.

Weird ending! To have Calypso spend the whole issue trying to get her body back and then not even pay it off is weird. And the Glory/Shotgun thing is mad weird! Yikes! Like so many things in this era, I don’t think that romance goes anywhere. I know when Shotgun next appears in the books, but I don’t remember any mention of Glory. I guess we’ll see. Weird issue.