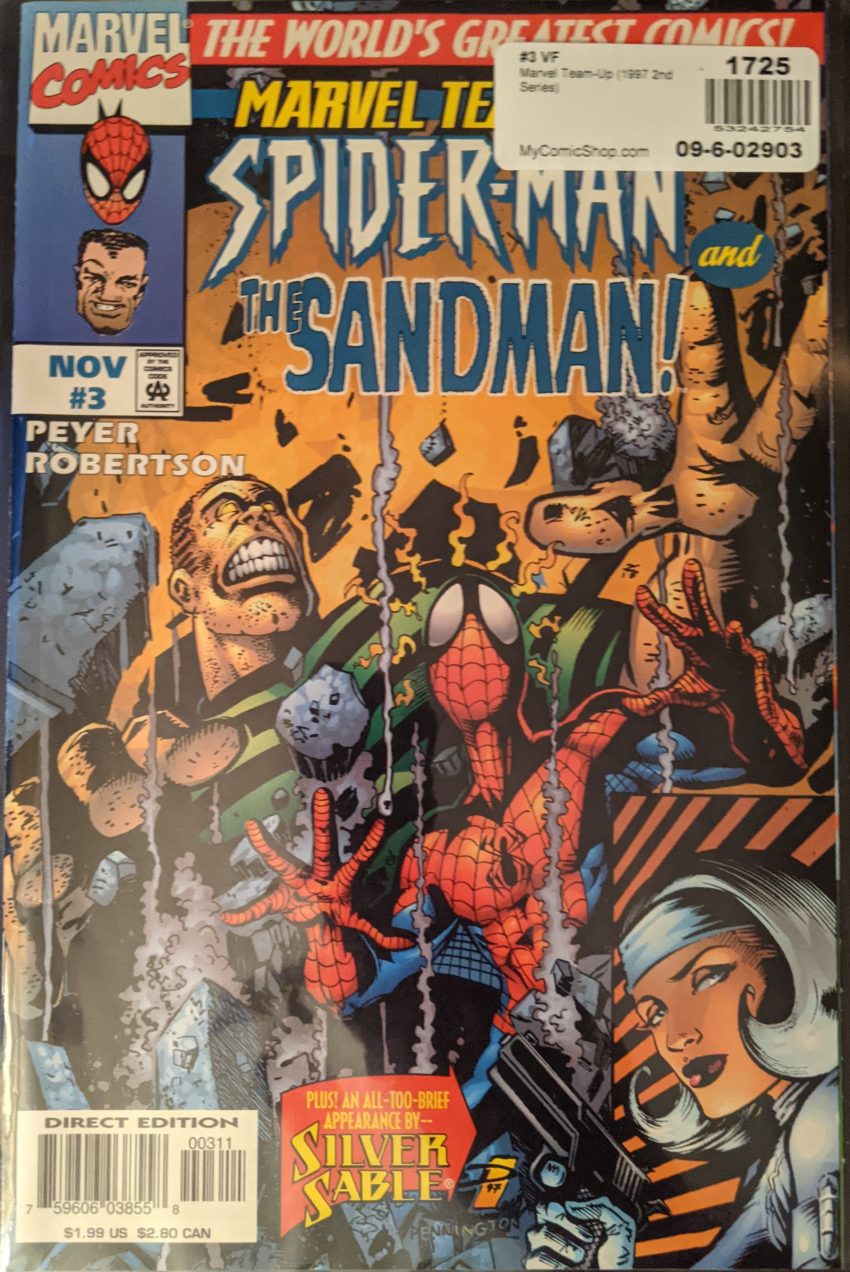 Darick Robertson was never far from the Spider-Office at this time, seems like. No complaints from me on that! He is inked here by Gary Martin. The Toms hold fast. This issue opens on a historic moment, as seen through the silly eyes of comic books:

A weirdly real thing to base this story on. And here we have a return to the blog of Ultimatum, last seen in ASM 325, now with their goofy leader, Flagsmasher.

That drop away chair gag is funny, but really, who would ever work for this guy? Always a hard sell, Ultimatum. Promoting a unified human race with no borders would be pretty cool if they weren’t always blowing people up to do it. I’ve always wondered if they were supposed to present that kind of moral quandary, or if Mark Gruenwald just thought anti-nationalists would be the perfect foil for a man weaning a flag in Captain America.

Well, this Authority thing has taken a weird turn, making him chummy with Silver. She asks Spider-Man if he knows The Authority, and he says no. So close! He’s still in Crete, seemingly not long after last issue, and desperate for a way home. She says she doesn’t run a taxi service, but she’ll send the perfect man for the job. As we move ahead to night, Spider-Man now asleep on a counter in that cafe as Herc continues to entertain, a pile of sand falls on his head.

I have always found the choice to make certain lines not black distracting, but this seems an egregious example even for someone who doesn’t mind it.

The Chunnel! And shades of strife between the UK and EU to come! Meanwhile, Sandman is flying Spider-Man on a private jet, and Spidey apologizes for his comments in the cafe, only to start needling him all over again about how he beat him by sucking him up with a vacuum cleaner the first time they met. And it’s making Sandy really mad, but it’s Spidey’s turn to be upset when he learns he’s not being taken home, he’s being taken to Britain to stop a renegade sect within Ultimatum that doesn’t want the euro to be adopted. Whoops!

Uh… coulda unplugged it. Back in the UK, Flagsmasher shows up to fight his own dudes, weirdly jazzed about the Chunnel breaking a border between nations, but the arriving heroes assume all the black & white garbed guys are together, pretty understandably.

Smashy looks a lot like Space Ghost, and I think Darick is leaning into that. Well, the tunnel starts flooding, and Spider-Man webs up Sandman to prevent him turning into Mudman and sprints up a wall with him, oddly unconcerned about Flagsmasher. He presses Sandman against the hole in the wall and tells him to plug the leak, which is kinda funny and kinda gross. Then things get weirder as we see Flagsmasher even saving one of the rail employees from the flooding waters.

Oddly topical all these years later.

Man, this is an unusual story, I gotta give ‘em that. Our guys make their way into the palace, and a nice maid tells them where the big meeting is taking place like they’re totally normal dues, but Flagsmasher warns them if they make a frontal assault, his former goons will certainly take the queen hostage, because that’s how he trained them (“You must be very proud,” quips Spider-Man). Sandman says he has an idea. That idea turns out to be sending in the maid with her vacuum, and guess who’s inside it? Peyer is really leaning into this. Sandman’s attack takes everyone by surprise, so…

Smashy has shown his true colors, and taken the opportunity to try to blow up Buckingham Palace. But he at least tells them to get the delegates to safety first. Complicated guy, as it turns out. However, he didn’t count on one of them having a danger sense, so Spidey immediately locates the bomb.

And with that, I think Spider-Man can finally be back in New York to appear in other titles. Sometimes figuring out how to put these things together is tough. Last on the agenda today is 2 ads in this issue I think are noteworthy. The first is for the home ports of the Marvel Super Heroes arcade game, featuring art by Joe Mad depicting Spidey and others…

“Cybercomic.” I wonder how annoying that was. Did it have sound effects? Oddly, though I think I had stopped being an AOL user by this point, and was getting there. I don’t recall seeing this comic, but I might’ve. I wonder if it’s still available anywhere. And look at that Reb Brown McFarlane knock off. Really celebrating the occasion. Wikpedia says they were 8-page, weekly comics made with Shockwave, a precursor to Flash, so they had some animation and limited sound. Apparently some 60 “cybercomics” were made for Spider-Man, in addition to more for various other heroes, wow. These began on AOL and eventually migrated to MArvel’s own website and got renamed that oh-so-early 2000s name, webisodes. Talent included Scott Lobdell, Tom DeFalco, Mark Bagley, Mark Badger and more, real names. I’m surprised. I wonder if these are still available somewhere. A commenter on a 2011 blog entry I found about the cybercomics says he worked on one of the runs of Marvel’s “Official Handbooks,” and was told Marvel literally doesn’t have them anymore, that they are lost to time like so many early internet bits. Surely somebody has them. With the demise of Flash, you probably couldn’t even view them. How fascinating.