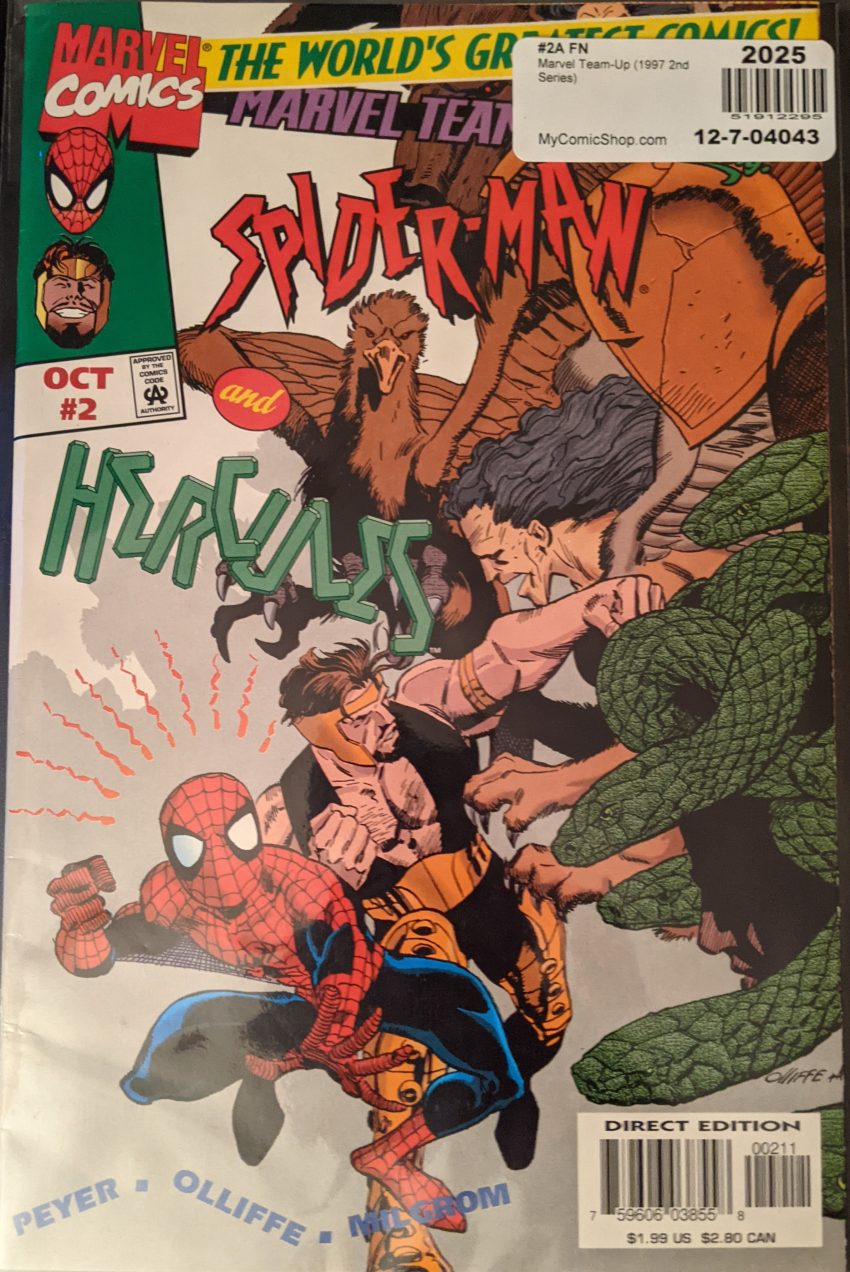 Hercules, eh? Hopefully this won’t be quite as silly as the last time these two had a Marvel Team-Up, in Vol. 1, #28, where you may recall Hercules dragged the entire island of Manhattan back into place on a chain after bad guys stole it. Sheesh. This month, Pat Olliffe drops down to just breakdowns with Al Milgrom finishing, and it looks like that’s it for him on this title. Weird. Still Tom Peyer writing and Tom Smith coloring. You can count on these Toms not to abandon us. Or can you? I have no idea. At any rate, this issue begins with a splash of JJJ yelling “NO!”. he is not going to send Peter Parker to Greece. Peter is back from LA already. I kinda figured last issue would flow right into this one. JJJ says The Bugle is downsizing and can’t afford to be sending people places, and even Peter has to agree he’s right.

Why not ring up your new pals, The Thunderbolts?

Hercules watching Xena is actually pretty funny. And with a pile of gold on his gut, no less. The decadence. He’s going by “Harry Cleese.” That’s ridiculous. This whole setup is ridiculous. In what would seem to be a great expenditure of webbing, Spider-Man has made a message between the twin towers that says “HERC IS A WUSS.” This actually works. Herc leaps up in a rage, kicks everyone out of the hotel, and…

So, I guess all that hatching is supposed to be Herc’s shadow falling on our hapless hero? Rather odd. Meanwhile, on the island of Crete, Medusa turns a guy to stone. That seems like a problem. Lucky for other residents of the island, our heroes are on the way, flying in a weird gold chariot that no one bothers to explain and bonding a little. When they land, Herc is annoyed that Spider-Man doesn’t actually know where or who the danger is gonna be, but then he’s off to the local cafe to get info, he says.

Herc flings everyone aside and says the fight only lasted 7.3 seconds. Spidey decides to go out looking for the trouble since Herc is content to entertain in the cafe, but then the kid runs in and tells him about the monsters outside. The minotaur, Cerberus, the sphinx and a harpy are all terrorizing people right outside. Spidey and Herc swing into action, but even so, Spider-Man notes this isn’t exactly a “millions will die” scenario. Herc throws Cerberus into the minotaur, but Spider-Man gets hit pretty hard by the harpy while trying to make sure a guy on the street is safe.

Thy Friendly Neighborhood Hercules is pretty funny. Herc swings up and kicks the bird in the face with both feet before hitting the ground like a missile. Spidey sees the sphinx is escaping and says they should go after it. Meanwhile, the news of the monster attack is cut into by Dr. Zeus, who has a plan…

Victor Buono was apparently an actor who played King Tut on the 60s Batman TV show and died in 1982. I got Todd DeZago calling everything “phat” in one book and I got this dusty reference in another. Some middle ground, please, fellas. As the battle is joined, Spider-Man overhears Dr. Zeus calling his companion “Medusa,” sees the TV camera, and quickly catches on. When Zeus goes to unveil his secret weapon, the camera has been webbed up.

I grouped the first 3 issues of this series because it seemed like they all flowed into each other, but maybe I was wrong. Unless someone’s helping Spidey get home next issue, I probably could ran them in publication order. A month? That seems like it would ruin Spider-Man’s life. Also, last issue, we had Major Love, and this issue, Doctor Zeus. What next? I guess we’ll see.