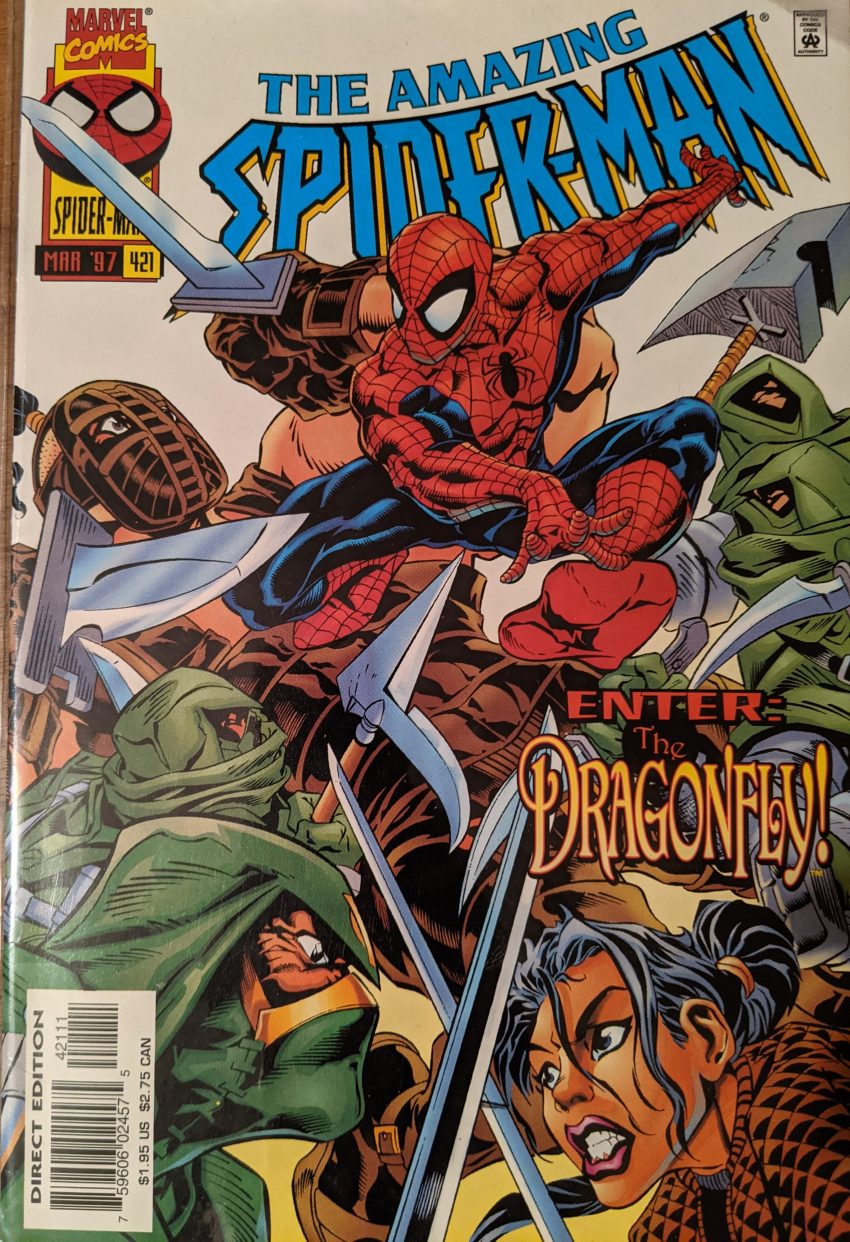 Get it? Like Enter the Dragon? Do you get it? Do you? Ninjas are sooooo 1980s. ASM is still Tom DeFalco, sometimes Steve Skroce, Bud La rosa and good ol’ Bob Sharen at this time. Let’s get into it.

I don’t purport to be an expert on any cultures or languages, even my own, but because I am highly dubious that any real research happened in comics writing before, uh, 2000, I did some googling. “Yin” is a Chinese name. “Meiko” is Japanese. Ninjas are also Japanese, of course. But who cares, right? This is the guy who made up his own transparently fake Native American tribe and writes black teens talking about people “not jazzin’ at full volume,” after all. Aaaaanyway. Peter has snatched the big mallet from one of those “test your strength” carnival games and soon Spider-Man appears swingin’ it at the “Korean ninjas.” Maybe we can say they’re Korean Hwarang, or “Flowering Knights,” something I just read about for the first time and am now interested in, but I have no doubt the script just said “ninjas.” One of them tells the intruding Spider-Man this is a matter of destiny.

“Little Flower,” huh? What if I end up eating crow about the ninja thing? I would be happy to! Also, Jackie Chan is Chinese and “Karsano” doesn’t appear to be a real name at all. Sigh. I think we should have seen more instances of Peter photographing events where Spider-Man didn’t show up back in the days when he was a photographer. He could’ve just been leaving an event when something superhero-y happened sometimes. Just to make it less weird that literally everywhere he goes, Spider-Man shows up, even things he was assigned that weren’t intended to involve anything super. Soon, Mieko is at Angela’s apartment, being grilled about what happened. I’ll say this, I may not be the biggest Steve Skroce guy, but he is, like, animator-consistent with his character designs. Meiko’s hair is falling in the exact same way in every panel and the cover. Meiko explains Karsano used to be her finance. That’s awkward. They trained in martial arts together, but he fell in with The True Believers (Are you serious, Tom?), “whispered to be an offshoot of the dreaded HAND.” His evil boss, the lil’ lady who was watching the fight, Madam Qwa (Not a real name), instructed him to kill Mieko to prove his loyalty. So we’re doing this, just cliches and gross cultural ignorance all the way down, yaaaaaay. Tom DeFalco lived in New York City. He had access to maybe the most diverse cultural melting pot on Earth writing these comics. He did this. Anyway, The True Believers (“Excelsior!”) only give you 3 chances ot kill your fiance for them traditionally, it appears, and he’s now failed twice, so she’s either gotta beat him again or kill him. Then she almost catches Spider-Man peeping on them. He’s somewhat familiar with The Hand, and thinks about trying to contact Daredevil or Wolverine, but then he sees the ninjas on the rooftop across the street, and it’s too late. And he & MJ having a meeting at ESU this afternoon, so he’s hoping to wrap this up quick.

Meiko and her former flame have a talk-fight about honor and various cliches which she loses, and she’s about to get chopped up.

At this point, I must almost begrudgingly admit that making the guy punch himself was pretty funny. Even the worst comics sometimes have their moments. Karsano handles the situation like a pro by yelling “I am a fraud! I must atone for my failure!” and burning to ash on the spot. Spidey is suitably grossed out, but Meiko rolls with it. She says she believes her quest has just begun.

What a shocking swerve. I think maybe the lil’ lady works for Black Tarantula, too, I think she might’ve been lurking in the margins of the last block. I forget and also don’t care. Turns out, there’s a 2nd story in this issue, by DeFalco, Geoff Isherwood & Paul Becton. How ‘bout that. Isherwood’s an old school guy, how is he adapting to the weird cartoony faux-anime stylings of 1997? Well, as we’re told it’s 20 minutes after the fight and Spider-Man is retrieving his regular clothes for the aforementioned meeting with MJ…

He is ignoring it, and more power to him. Jacob Connover! Last seen being fired as The Bugle downsized. It’s kind of weird that DeFelco, who wrote the momentous issue where Peter told Aunt May he’d dropped out of school and caused a rift between them in ‘84 (ASM 253), is now writing him going back in ‘97.

Boy, that is some choice of how to draw Mary Jane. Some things never change. Well, they kinda do, but not til like 2017. We see the “Korean ninjas” robbing a warehouse or something while our hero is getting his school finances sorted. We see a bill for $2812.75. I think it might be for BOTH of them! And Peter’s freaking out because he’s not sure how they’ll pay it! Hahahaha. As it happens, I was starting college in 1997, and this is ridiculous even then! Hahaha. As clueless about college as he is about Asian names, this guy. Anyway, Jill and Paul Stacy, Gwen’s cousins, happen to be in the same building. Jill has taken a shine to MJ, but Paul doesn’t like Peter, and Peter thinks he blames him for Gwen’s death. This is a horrible subplot. Also, we may recall The Rose and the awful, font-abusing Delilah are players in this period…

Speaking of The Black Tarantula, as Peter meets his new professor, who tells him if he can’t keep up, he should drop out now, BT’s lil weirdo establishes a video chat with…

So, not so much a 2nd story this issue as the back half of the main story. Perhaps made to look like a 2nd story to cover up for Skroce failing to turn in the rest? Pure conjecture, no idea, but given his erratic and brief time on the title, seems possible. I cannot tell you how excited I am to get to Adjectiveless Spider-Man next post. If nothing else, at least it will look cool.