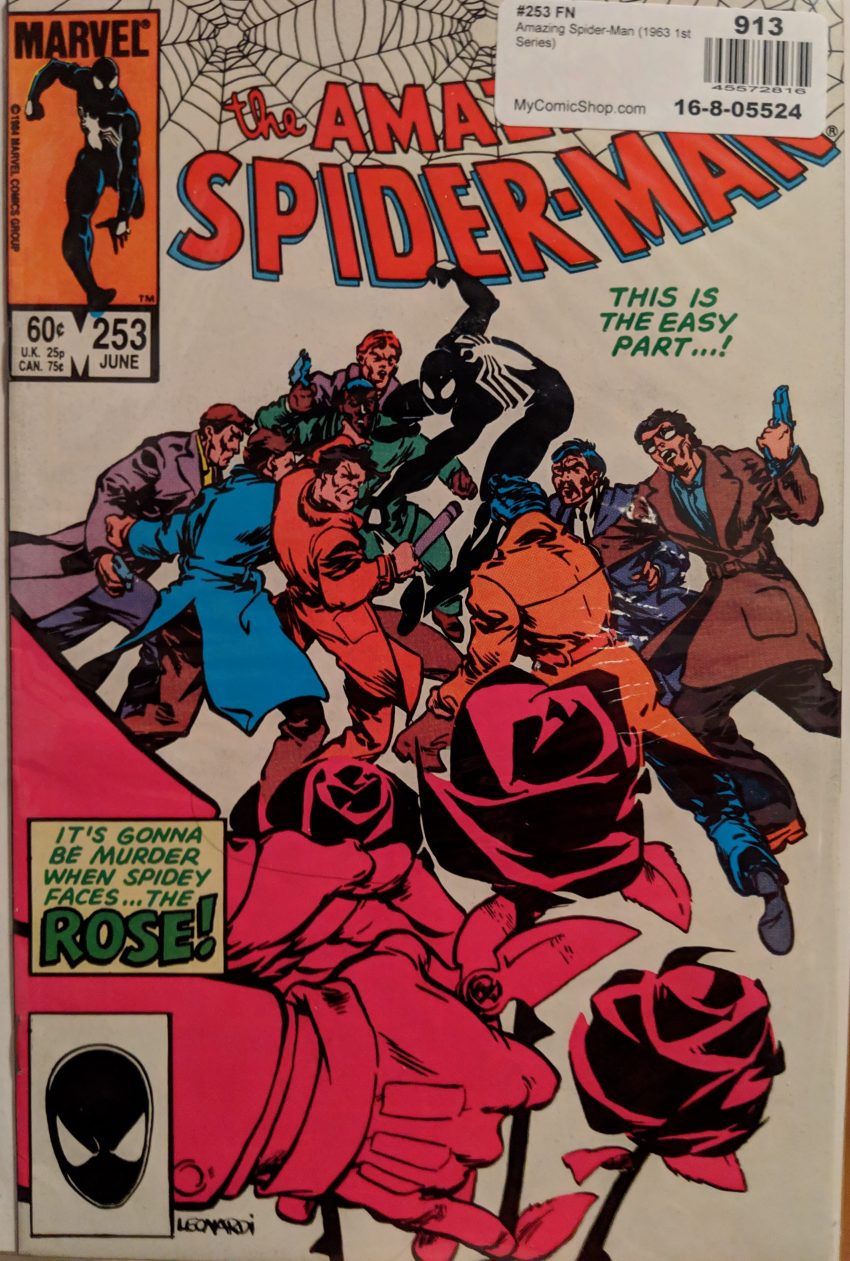 Once I started down this road of trying to get as much of ASM as I could, I didn’t do anything with this era until I got 252, since it was so expensive I wasn’t sure I would actually get it. But once I did, I was pretty surprised to learn the rest of this story was not really pricey at all, and snapped up 253-259 from mycomicshop.com for cheap, easy. I know there’s the concept of “key” issues, where collectors only want the big ones, but I guess I figured more people actually read these things instead of jamming them in a plastic case and never looking at them again, and might want the full story. Silly me! Yeah, we’re opening with collector snark this week. Comic book grading is such a scam. Look. Whatever. Let’s get on with it.

Please welcome Rick Leonardi to the blog! Unless this isn’t his first appearance. I assure you, I have totally lost track. There’s all these guys in the 80s who were so cool, but never seemed to land the regular gig they needed to be held up with the legends, and he is surely one. There’s a few instances of him pinch hitting on Spidey over the years, and they all just make you wish he’d been able to do more. Right now, he’s onboard for 2 issues, inked by Bill Anderson, and they look amazing (Uh, pardon the pun?). Hey, how about we actually get to the comic?

Things get started with Peter Parker assigned to shoot a football game for The Daily Bugle’s sports reporter. He’s not having the best time.

The blond kid is Tony Nesters, kid brother of “New York Mammoths” quarterback Ray Nesters, who is currently losing a game to the “San Francisco Skyhawks.” As the game ends, one of Ray’s teammates says he tried his best, but Ray doesn’t look like he agrees. When Wendy finds out his brother is standing next to her, she essentially shoos Peter away and wants Tony to get her into the locker room. Peter is happy to let them go. He’s running late for dinner with Aunt May, where he hopes to discuss something important, so he leaps up into a shadowy corner and lets his crazy new costume do its thing.

As he swings away, he thinks about how the suit is still a mystery to him. He’s not even wearing webshooters anymore, it just generates the webs somehow. He keeps meaning to take Reed Richards up on his offer to check it out. Also on this page, as he recaps his origins, a Spidey drawing that would later get reused a ton in advertising:

Elsewhere, the Nester brothers pull up to Ray’s luxury apartment, and he says he’s going to go get a paper. He’s not, though, he’s meeting with some shady characters.

Nesters doesn’t want to throw anymore games, but a gun to the head is a pretty convincing argument. The goons say The Rose will be in touch later in the week with instructions. Nester heads back inside and verbally takes out his frustration on his brother, then we move over to Aunt May’s house, where dinner is winding down…

Rough stuff. The pressure of school and work and Spider-Man have just been too much for our hero lately, and something had to give. Soon enough, Spider-Man swings away, thinking he didn’t expect Aunt May to be so upset, and worrying that he’s messing his whole life up. Elsewhere, the mysterious Rose tells his goons not to worry about Nesters. And then we cut to Tuesday. Nesters returns home from practice to find money & instructions slipped under his door, telling him how badly to lose on Sunday. Then the phone rings, Nesters tells one of the goons off, and we get our first look at the new villain:

Peter has stopped by The Bugle to meet with Robbie, who tells him his football pictures weren’t good, and he needs to get serious. After his 2nd bummer conversation this issue, Wendy the sports reporter catches him out in the bullpen…

That’s not gonna work out, though, because The Rose’s goons kidnap Tony. Ray comes home after practice, thinking about how his life seems to be out of control, only to find a note saying The Rose has his brother and wants to talk. And that’s right about when Wendy & Peter show up for the interview.

Peter & Wendy see that the apartment has been trashed, and suddenly Peter has vanished, and Spider-Man is following Ray’s car. Ray chooses to go nuts and drives his car right through the wall of the meeting place, hopping out and taking a gun off one of The Rose’s goons.

The Rose is angry, saying they need Ray alive to play on Sunday. Spidey has seen enough, and dives through the window.

Gotta make a living! Really great Spidey action here. As he deals with the army of goons, Ray wants to get Tony out of there, but Tony won’t leave until Ray admits he’s been throwing games, and Ray freezes up. Spidey keeps on fighting until he sees The Rose trying to escape.

As more goons swarm our hero, Ray tries to attack The Rose, who proves pretty formidable as a fighter, quickly disabling Ray while rightly telling him the only one he has to blame for his current situation is himself. The Rose has begun to realize he’s going to have to do something drastic to get out of here, so he uses an explosive to make a huge stack of crates fall on Ray. Spider-Man instantly leaps in, trying to protect Ray with his own body.

That one way is coming clean to the press, and the next day, The Daily Bugle has the exclusive. Peter and Wendy discuss their scoop at the office (Wendy not seeming to mind Peter’s disappearance the night before). Wendy wonders why someone’s who’d worked so hard and sacrificed so much would throw away his future like that, and as she walks away, a troubled Peter Parker has no reply.