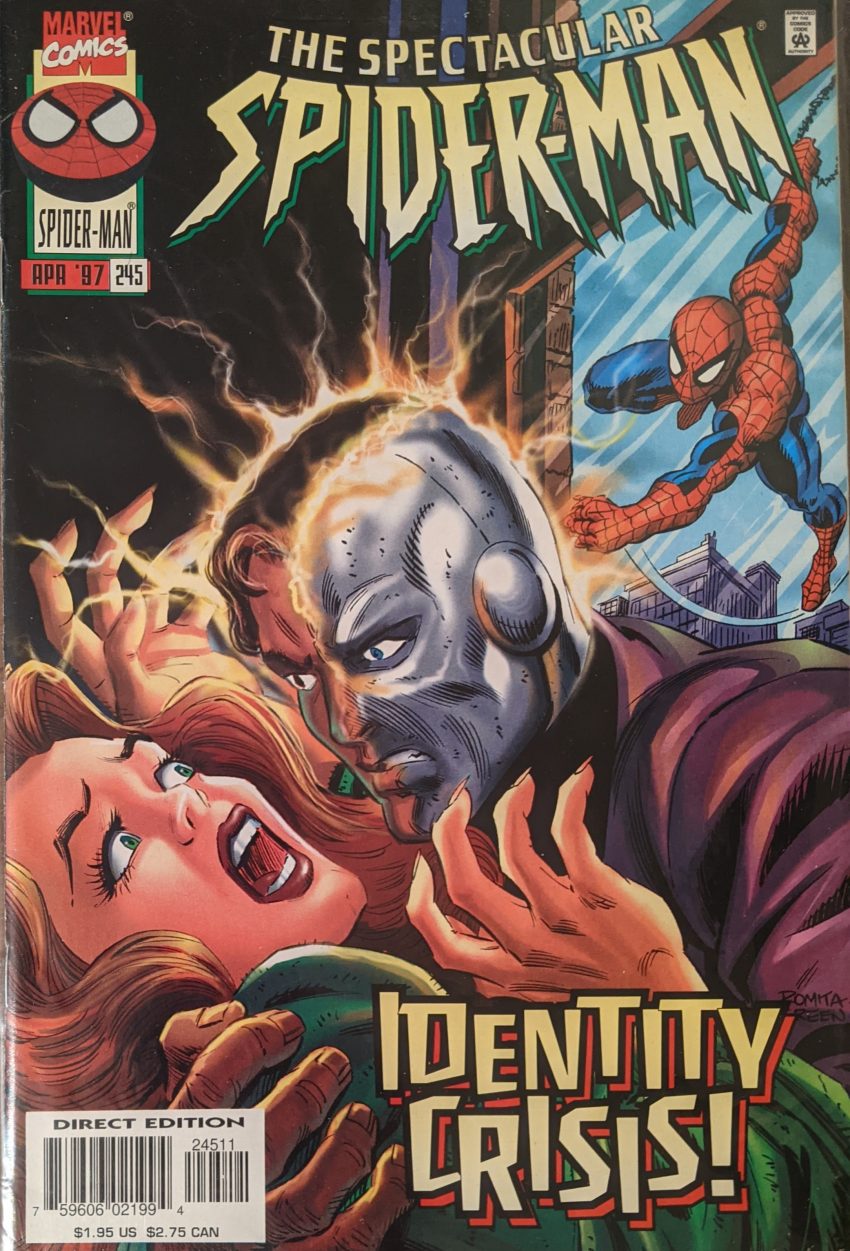 Rrrrrrandom Romita, Sr. cover out of nowhere, hello! It’s become hard to remember my life before this Chameleon story. It just feels like it’s been going on forever. To open, Flash Thompson is in a bar and is now drunk. So drunk he gets thrown out into the rain and seems to pass out in the gutter. Immensely fun. Like so many sadsack DeMatteis plots, this just came out of nowhere. Also, MJ is up late because she can’t go to bed til she knows what happened with Chameleon.

That seems bad. He’s still there, now floating above the house as MJ tries to talk herself out of it. Then we get back to the superhero part of the show, as Chameleon and Spider-Man reiterate where we left off last issue. Good guys in a cage, “call me Kravinov,” the whole thing.

Spidey leaps over and hits him and threatens to “take him apart piece by piece,” but then he zaps the cage. He tells our man about how he’s Kraven’s brother and all that, and then Spidey is hit by a poison dart and passes out. But Chameleon didn’t shoot it.

Yaaaaay. Spider-Man grabs the bars and zaps himself as Chameleon leaves. We check in with Grizzly and Kangaroo talking about how they’re losers. Grizzly says he broke Spider-Man’s back and threw him off a train once, referring, of course, to WEB 58, but either he or DeMatteis or both having forgotten that issue ended with Grizzly knowing full well Spider-Man faked his loss just to end the fight.

Then The Spot shows up to join this team, and I cannot manage to care, and then we rejoin MJ, asleep on the couch, as a shadow appears over her.

Ugh. Clearly, she mentioned Aunt Anna to make sure this isn’t Peter, she’s no fool. But ugh, nonetheless. I don’t remember this issue. I don’t know if I bought it at the time. It looks like I did, no price sticker or anything, but I just for real don’t remember this, and skipping TAC wasn’t hard given the creative team at this time.

You know, I guess the funny thing is, MJ or anyone else with a bat could easily take out The Chameleon. It’s not like he has any kind of powers. “Mary Jane can take care of herself” is a welcome plot in the marriage era for obvious reasons, but “villain plans to rape Spider-Man’s wife” is not welcome anywhere, anytime, for any reason, so no dice this time. Back in the cage, Dr. Kafka is making the latest of many excellent cases for why she sucks at her job, talking about how Dimitri would never really hurt anyone and she knows his heart and blah blah blah. Dr. Kafka sucks. Spider-Man is rightly furious at her, and then webs up some big gloves for himself and starts trying to pull the cage apart over the others’ protest that it’ll kill him. You’d never believe it, but that totally works. He goes zooming out of Chameleon’s lair without a word, leaving Kafka & Jameson to marvel at his willpower. Then he kicks the front door of his own home to bits and rushes upstairs.

Yeah, turns out that wasn’t a hallucination of Kraven, after all. But is it really him? Don’t expect a satisfying answer. ALso, it’s worth noting, after all this… Kraven’s last name is Kravinoff. OFF. Not OV. I dunno what the deal is with this. In what has to be one of the most bizarre mistakes I’ve ever seen, this issue has the same letter pages as last issue, right down to the next issue blurb describing the issue you just read. How’d that happen? My next post is an issue of Spider-Man Unlimited, which has become a really transparently terrible comic by this point, but after 4 issues of this crap, even that will be a nice change of pace.