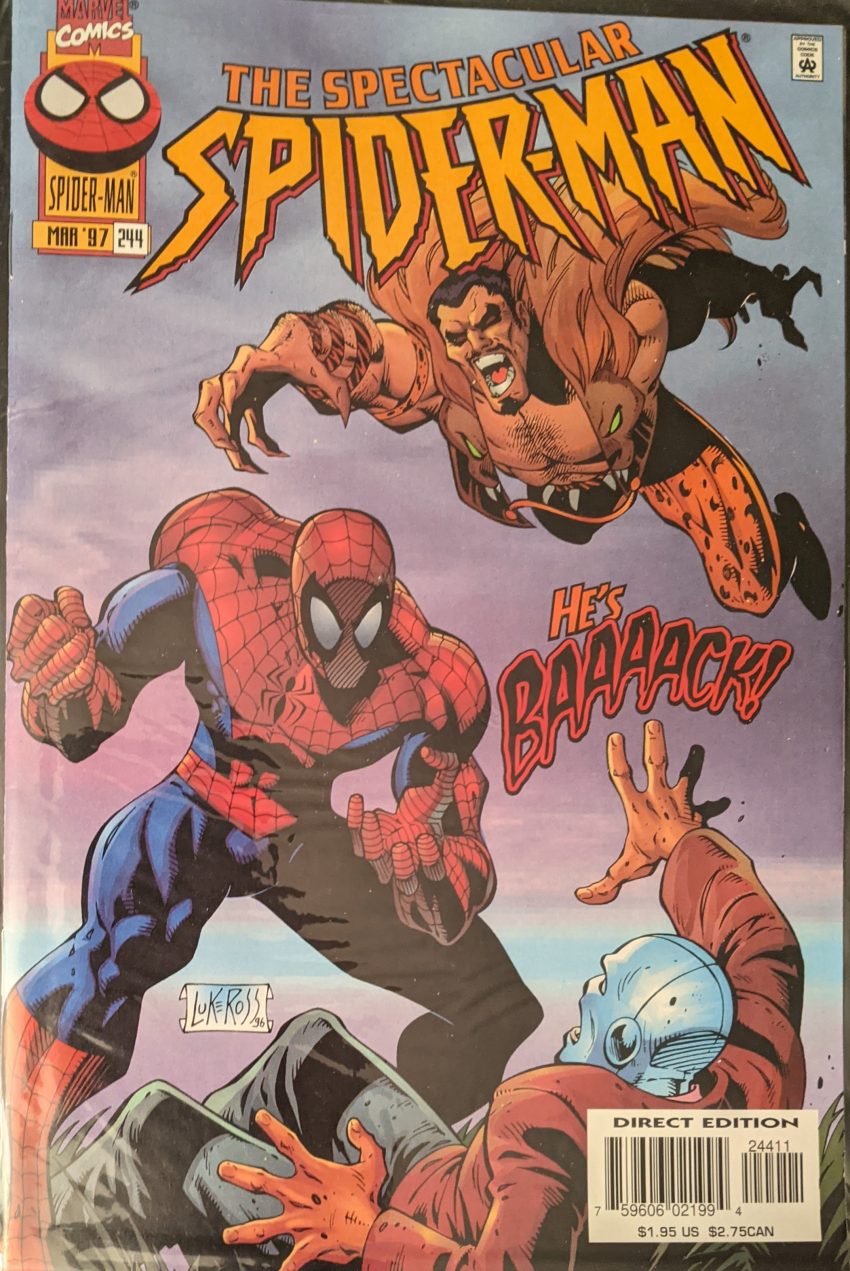 Yay, he’s back. Or is he? This is a lot of Luke Ross for a guy to have to sit through in sequence. Man, this time period. Lotta ups & downs in a long-running comic character, obviously, but for me, the word for this period is “lackluster.” There are way better and way worse runs, but in some ways, bad is better than middling. At least bad inspires a reaction. This stuff is neither good nor terrible. But, also, like 1994-1998, for sure my least favorite period for art on Spider-Man, and in comics, in general. There’s exceptions, of course. John Romita, Jr’s here, for starters. But this faux-J. Scott Campbell, faux-Joe Maduriera wave was not my wave. Everyone ripping off Jim Lee was bad, but this was worse. Joe Mad, at least, was pretty good, but the wannabes trailing in his wake never were, and I was never into Campbell to begin with, so an industry rife with people trying to be 5th-rate versions of him… rough time for me. The aggressive change to “photorealism” at the turn of the century was maybe not that great, historically, either, but compared to this? No wonder the early 2000s felt like a Renaissance for comics. But… way off topic. DeMatteis has swung the needle back to Komedy this month, as a page of grim’n’gritty narration tells us we’re entering the lair of a terrifying and brutal villain… The Kangaroo.

Approaching this objectively, on the one hand, it is obviously, intentionally silly. On the other hand, the original Kangaroo just being a guy who jumps and wears a furry vest… not very kangaroo-esque, really. So… this is sort of an improvement. The optimal move is not to create a new Kangaroo, but I supposed this is the next best thing. Why does he have a stylized “APB” on his chest?

Boy oh boy. Ross still aping McFarlane on Spider-Man and Campbell on everything else. Things actually get worse on the following page.

Oh boy. Not to run yet another sequential page, but…

… look at that last panel. What is this, a Blondie comic? Anyway, Peter tells her Chameleon knows who he is, and she is remarkably cavalier about it. When pressed, she rattles off all the villains who’ve tormented her (Well, some of them) since they got married, as well as the hardships they’ve had to deal with during The Clone Saga, and says they’ve survived all that intact. She says even if Chameleon were to reveal his secret to the world, they’d just move, take up fake names, and keep on. She’s pretty solid these days. So she puts his mask on him and tells him to go find Chameleon and slug him one for her. Speaking of whom, maybe it’s time to see how about how Kraven was on the last page of last issue. Dimitri is on the ground wherever we left him, staring up at his seemingly returned friend/tormentor.

Is it really him? Is it a trick? Is it somewhere in between? Weirdly silent last panel considering that sentence continues on the next page “–would make of this?” But it’s over a different scene, Flash Thompson & Betty Brant walking in the rain. Betty says she’s been burned by Flash in the past, but decided he sounded so down, she should come see what’s up. Flash monologues about how he hit a low point, going to bars to find people even lower than him, which reminded him of his drunk dad, and how he worried he’d fall into a hole. Betty says she doesn’t think that would ever happen.

What a page. What a face. What a plot twist. Also, why’s his hair brown? Is it supposed to look wet? I dunno. He kicks over a trashcan and thinks, “Maybe just one drink.” How’d these two split up in the 80s, I suddenly wonder. I remember them in it to win it in Inferno, and then suddenly Flash was with Felicia. I must’ve seen it already, but… no memory of it. Maybe it just got lost in the shuffle when Conway quit. Odd. Anyway, we cut to Ravencroft, where Dr. Kafka has a list of 35 safehouses Chameleon might be in, and wants her & John to go look in all of them. That’s a lot. But then Edward, the former Vermin, runs in to say word of Chameleon’s escape has leaked somehow, and one of the Senators who authorized Ravencroft to reopen after its history as the most escapable facility in the world, wants answers. But Kafka says to tell them she died and she and John rush off into the night, watched by Jack O’Lantern. Back in Queens, MJ wakes up from a Chameleon-induced nightmare. She chastizes herself for talking all  tough to Peter only to have nightmares about the guy. She goes to the closet and grabs a bat to take back to bed with her, just in case, hoping to herself that Peter can catch Dimitri tonight. Her hubby is out swinging around, thinking MJ is strong, maybe too strong, that she’s holding too much in, and about how he’s glad they’re going ot therapy, when his Spider Sense goes off.

Who on Earth would call that “a death of honor?” “Eat some bugs, bury Spider-Man alive instead of kill him for no obvious reason, and then eat a shotgun. Flawless victory.” Is DeMatteis just talking about himself, here?

Yeesh. Dimitri says his father beat the knowledge that he was a Kravinov out of him as a child, but he’s remembered. Then Kraven vanishes, a hallucination the whole time. Shades of Fight Club. The realization that he’s of the “exalted” Kravinov line fills Chameleon with pride and fire, but then Spider-Man shows up. He makes fun of Dimitri and villains in general for always talking to themselves like he’s not the king of that, but Chameleon’s not having it. He’s all hyped up on being a Kravinov now. Spidey announces he doesn’t care what Dimitri could do with the secret of his identity, and then the villain lowers the cage Kraven kept Vermin in during Kraven’s Last Hunt down into view.