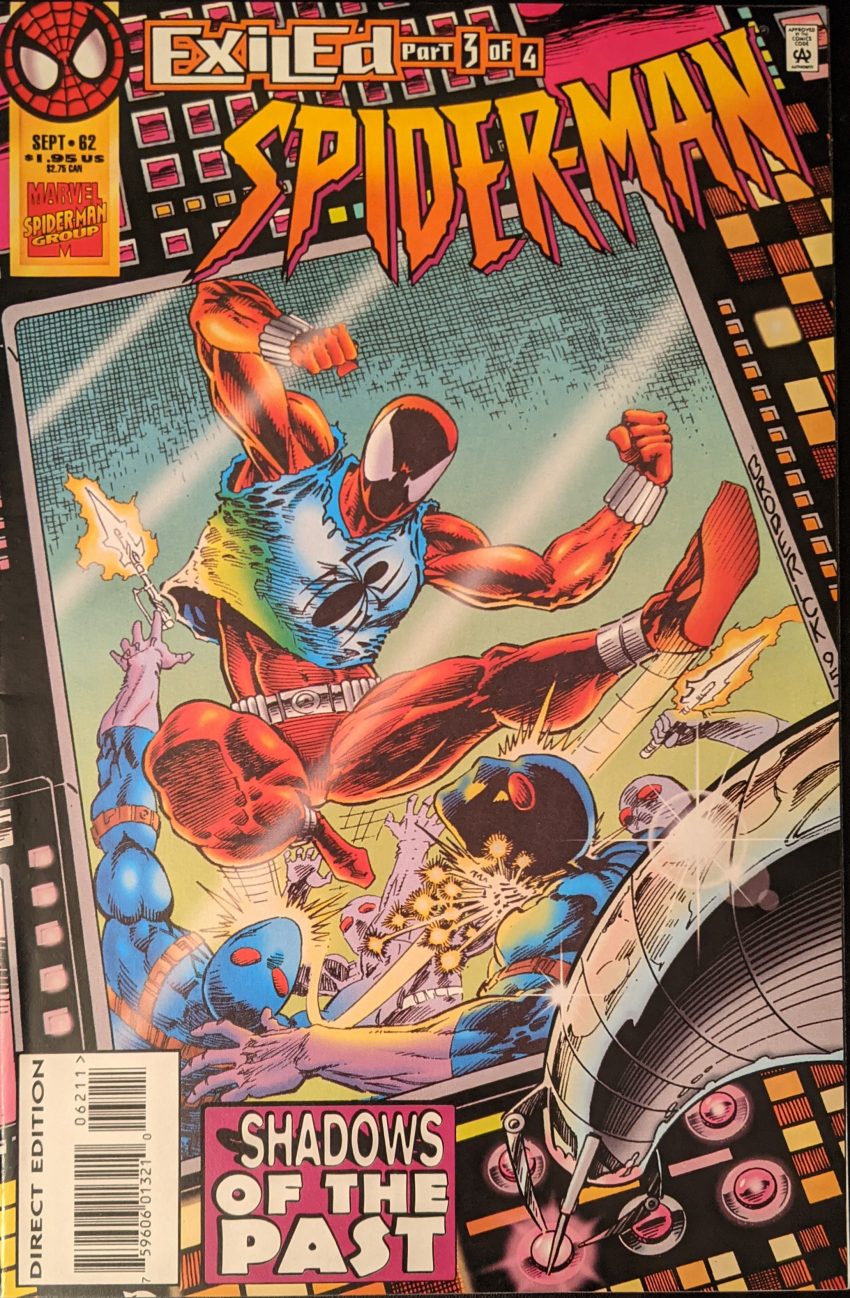 This month, Spider-Man is drawn by one Pat Broderick. Man, what must he have thought of this era? He was doing hyper-detailed and cartoony way before it was cool (And allegedly getting treated very poorly by Jim Shooter for it), and now he turns around and everyone’s doing it. We last saw Pat doing his thing in MTU 91. He joins Howard Mackie, inkers Chris Ivy & Tom Palmer and colorist Kevin Tinsley to pick up with Scarlet Spider trapped and coming to after last issue. An unseen figure shines an awfully bright light on him and demands to know his connection to Seward Trainer as he recaps last issue and tries not to pass out, but then he passes out, taking him into more flashbacks from how he met Seward.

The unseen tormentor says this has nothing to do with Ben, that he/she just wants Seward’s data banks. Ben is shown a hologram or something of Seward in a small room filling up with water, but when that makes him feisty, they zap him til he passes out again. Time for this issue’s brief cameo by the title character:

…which is essentially the same cameo as last issue. Kevin Tinsley loves that maroon page color. That’s The Vulture flying by back there. He’s still young in this period, but the process by which he became so is wearing off, and we’re told he’s ready to kill to stay this way. Back in the past, we see Ben & Seward working together, sometime later, having set up Seward’s new lab together. Each one thinks he owes the other. But then the reactor begins to leak or something, look, I just found a hair in this comic. It must be mine, but it also must be from 1995. Here I sit, an old man, my hair largely deciding it no longer wants to live on my head, and I got this remnant of a bygone age in here. That’s weird. Almost unsettling. Anyway, they stopped a meltdown or explosion or whatever, but only because Ben revealed his super strength. In the present, Ben wakes up and finally busts loose.

Despite being in a fight, we’re told Ben once again flashes back to that one time wirth Seward as he “prepares for battle.” Seems more like you wanted to continue this flashback and couldn’t come up with a good way to do so. In the past, Ben is now down in the power core, trying to prevent it from blowing up. Seward says he’s backed up all his files and they can just leave, but Ben is intent on saving the day. He doesn’t, tho, and an explosion traps him beneath debris. He begins his usual-for-that-time sadsack “I deserve this” crap, but Seward won’t have it.

There’s how it started. Kind of lame how it ended. Seward’s inexplicable, almost preternatural belief in Ben is kind of weird, but he didn’t deserve to wind up a pawn of Norman Osborn. In the present, Ben realizes his foes are androids and he can really cut loose, and soon he’s smashed them to bits. His unseen tormentor says if he’s a creation of Seward’s, he/she must have the secret. A now very upset Ben uses his Spider Sense to find a point in the wall he can tear open, looking for whoever’s behind all this.

Scarlet battles through the hordes of robots as we see Sweard getting very close to drowning, but you know how that has to turn out.

Ok. I don’t remember these very well, as usual. I know who’s behind the robots, tho. Next time we’ll see how this wraps up in Spider-Man Unlimited, so it’s almost certain to look pretty bad and be written pretty badly. Can’t wait.