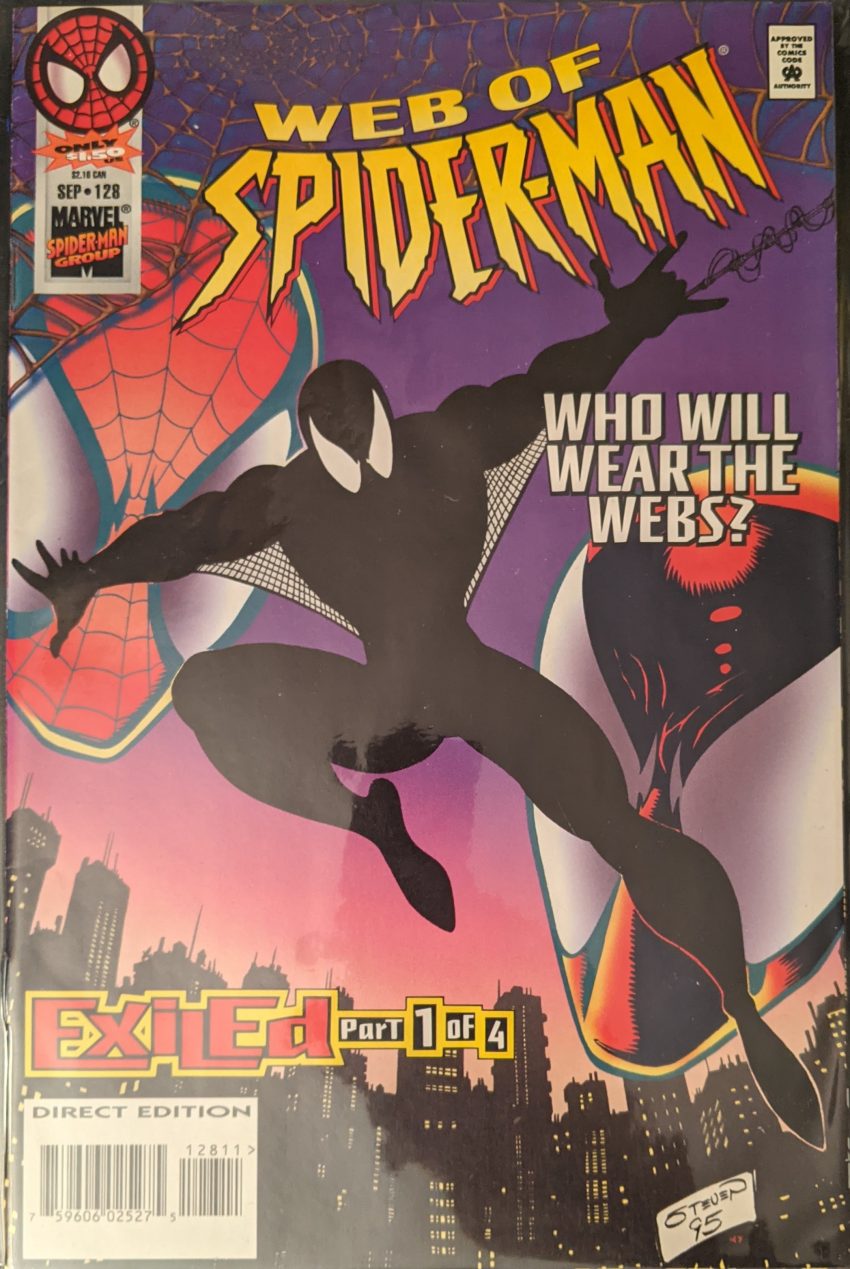 Who indeed. Who indeed. It’s 1995 again, and we’re back to 2 Spider-Men running around. This issue’s plot comes from Tom DeFalco with a script from Todd DeZago, and art by the established team of Steven Butler, Randy Emberlin & Kevin Tinsley. It opens with Black Cat on the move, with a lot of florid copy not unlike what Mantlo used to do about her “giving herself to the night” and whatnot.

Good angle to look at, I suppose. Harsh judgement of Peter. It’s not his fault he (thinks he’s) a clone. But, look, it’s no one’s favorite villain, Despayre! I think that’s how it’s spelled. I’m sure he’ll tell me later. Has he been on the blog? Maybe. I think I first saw him in the single issue of Cloak & Dagger I own. Anyway, while Black Cat entertains a bunch of goofy mysterious talk from a dude that looks all evil and stuff for some reason, Peter Parker & Ben Reilly are visiting Aunt May & Uncle Ben’s graves. Ben is dressed like a plainclothes cop doing a terrible job of blending in for some reason.

The boys lose their tail by leaping up the side of e a building, and then they switch to their Spider-suits to follow the guy, which, you ask me, if this guy’s following Peter Parker and his clone around, maybe don’t show up to interrogate him as 2 Spider-Men. Just a thought!

Tom Jones! It’s not unusual, as it turns out. But, like is this not hyper-suspicious? I dunno, it’s the 90s, nothing makes sense. Elsewhere, Mary Jane finishes up a phone call with a “Rolfe,” who I wish was the dog from The Muppet Show, before taking off, telling herself she just hit the jackpot. Back in the A plot, the Spiders have learned these are those dudes who work for Black Cat, and she’s missing, and last they heard, she was gonna go check on her old friend, Peter Parker. Spider-Man declares he’ll scour the city for her so aggressively that Scarlet Spider is surprised. As they swing away, Spidey explains his deal with her and then SS wants to know why he picked Tom Jones as the concert, which is kinda funny. Tom was having a real resurgence in this period! Somewhere else (Could be anywhere, there’s almost zero backgrounds drawn), Despayre is brainwashing Black Cat into thinking someone is the source of all her pain and sadness. Gee, who could it be? Is it Despayre? Oh, sorry, it’s “D’Spayre,” much better. Maybe he’s French. How’s our C plot doing?

MJ gettin’ back in the game! Seems like a good move for her. Elsewhere, the Spiders swing around town looking for Felicia until she launches herself at Spider-Man, yelling “I’ll kill you” over and over.

A caption on the next page lazily tells us Ben encountered D’Spayre in his years on the road, and maybe they’ll tell us about it some day. Right out of the “Wolverine already knows every new character we introduce and sometimes Gambit does, too” playbook. D’Spayre is doing his thing, feeding on their, uh, despair, but Scarlet is weirdly unaffected. He’s shown bouncing around D’Spayre (Typing that is really killing me) to no effect (for some reason?) until he sees Felicia is about to execute Spider-Man, and yells that she doesn’t want to do that, which breaks the spell for some reason. That sure was easy. This allows them to team up and whup D’Spayre in one page. Really easy!

The idea that MJ and Felicia are such pals is nice to me (Even if it’s 99% totally off-panel).

That seems weird, right? Considering we’ve already seen Ben take up the mantle just 2 months from now? And isn’t this going to be a short block, then? Ha. Hahaha. If only…

The End! No more Ben Reilly, all those comics with him as Spider-Man were just a fever dream. That woulda been pretty cool. No, instead, what happened was interference from higher up, as usual. The Spider-Team wanted to get Ben into the suit as fast as possible, and editorial and marketing just kept dragging things out. Fresh off being forced to do Maximum Clonage, they have been made to spin their wheels for awhile and very shortly launch an even more overt, even more misguided attempt to create a Spider-Man version of the hit Age of Apocalypse event in X-Men. But we’re not quite there yet…