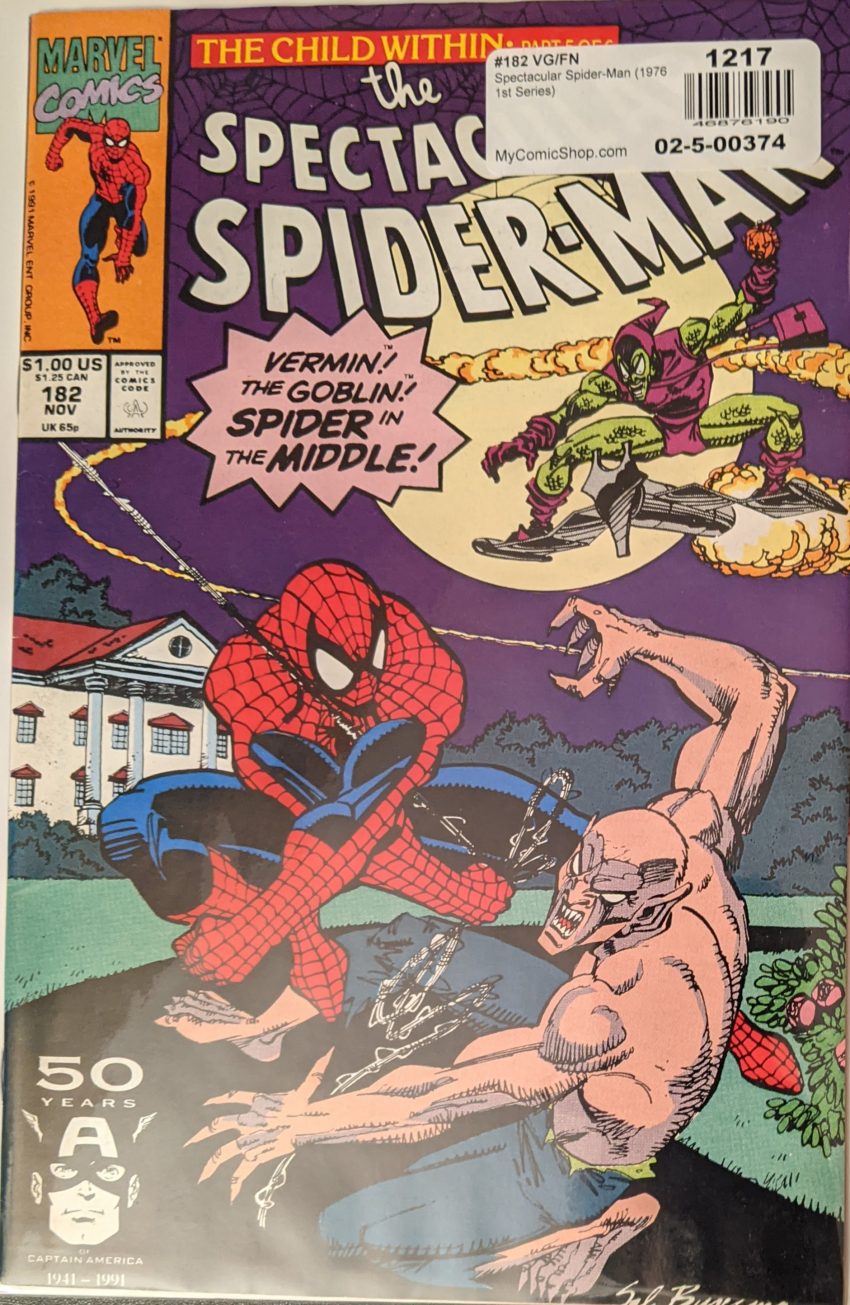 The people trying to write cover copy for this nonsense like these are actual superhero comics must be so tired. Look at all those exclamation points. “We PROMISE this isn’t just a bunch of sadsacks being miserable! They’re gonna FIGHT while they do it!” Up til now, Dr. Kafka’s examinations of Vermin have seen him talking about “the bad thing” as a breaking point for his psyche. And I don’t think anyone would be surprised to finally have that spelled out…

“Spider-Man! Now starring in 4 comics a month, and 2 of them are about child sexual abuse for some reason!” I’ve not read Vermin’s first appearance in Captain America, but one assumes he was not 8 years old when transformed. One assumes this tragic backstory was added far more recently. One assumes there was no ill intent behind making the victim of one of the most horrible possible traumas a LITERAL MONSTER, but guess what, that doesn’t matter! This is deplorable! The 80s & 90s trend of giving every villain an abusive father was bad enough, but this is too far. What does this say to people who’ve lived through these experiences (Who, by the way, PROBABLY don’t want to relive them while buying into what they thought would be escapism!)? They always wound up villains and monsters in this period. No one survived abuse and became a hero, or even just a regular, everyday advocate. No, if you have an abusive backstory in comics of this period, you’re a broken miserable person, and almost certainly a bad guy, too. It’s gross.

Vermin is about to murder his abusive (step-?)father (Still dragging his mother around by her hair. What’d she do to deserve this?), but then he sees the child version of himself begging him not to do it. And if that wasn’t depressing enough, Peter Parker is still doing this:

Sometimes, over the course of writing all these things, I feel like maybe I’m being too hard on ol’ JM, but other times, I feel like I’m not even really scratching the surface.

Going by the color alone, I was worried Kraven’s ghost was going to be the one coaxing Spider-Man out of his delirium, and I was about to lose it myself, but no…

I’m pretty sure he didn’t even have his mask with him when he came here last issue. Our hero flails around Dr. Kafka’s office in a panic for a bit before slowly getting it together. Kafka tells him he faced the monster and won, but neither of them sees the silhouette of The Green Goblin approaching in the distance. Elsewhere, Vermin is arguing with young Edward about killing his dad until his dad tells him there’s no one there, and Vermin agrees, there’s no one there to protect him.

Nothing but a happy ending headed our way, I’m sure. Punishing the old man is about the only thing Vermin could’ve done right here. Oh, wait, here’s his deal:

While this is all still utterly reprehensible to me, the grin in the last panel is great work by Sal. Back at Dr. Kafka’s, Spider-Man is still reeling at the revelation that he blamed himself for his parents’ death as a child. Dr. Kafka says it’s a common coping mechanism for trauma, trying to establish control over a situation you are powerless in. JM read a book! The Goblin is still hovering outside, but then a nurse runs in and informs Dr. Kafka of the standoff at Vermin’s house, and Spider-Man’s already gone before she can tell him to go help.  On his way, he thinks about how shaken he is by the evening’s events. He feels off and shocked and drained, but also free, having faced down his “monster” and beaten it. This recurring theme of Spider-Man facing his darkest place metnally and overcoming it might have some weight if DeMatteis didn’t keep returning to that well over. And over. And over. Every time he faces down his darkest fear, it’s only matter of time before he’s going to be facing down his next, other darkest fear. I mean this and Soul of the Hunter back to back is hilarious, really, but also Kraven’s Last Hunt, all that “the spider” garbage during the clone mess, his mental spiral after hitting MJ in the clone mess… How many times can one man go on the same psychological journey?

But Vermin can’t pull the trigger, and then flies into a rage at himself for not being able to. Spider-Man shows up, calling him Edward and genuinely trying to get him to Dr. Kafka with no further violence, but Vermin is almost happy to have someone he can hate without feeling confused and lunges for him. They go right out the window. Vermin’s army of rats (No one ever explains that) goes after the assembled cops and Spider-Man shoots a web and swings them up onto the roof with remarkable calm, given the situation.

This arc feels like it’s doing too much. Either of these stories could’ve been its own thing. And it feel like a result of Kraven’s Last Hunt having a dueling narrative with Vermin and an established Spidey villain. Like this has to have that structure because the previous milestone did. But, especially because Spider-Man actually does have the complicated history with Harry the Kraven’s Last Hunt tried to pretend he had with Kraven, it feels like too much. Note there hasn’t been an appearance by any of the supporting cast since part 2. Even Kraven’s Last Hunt made time for MJ. This feels crowded.