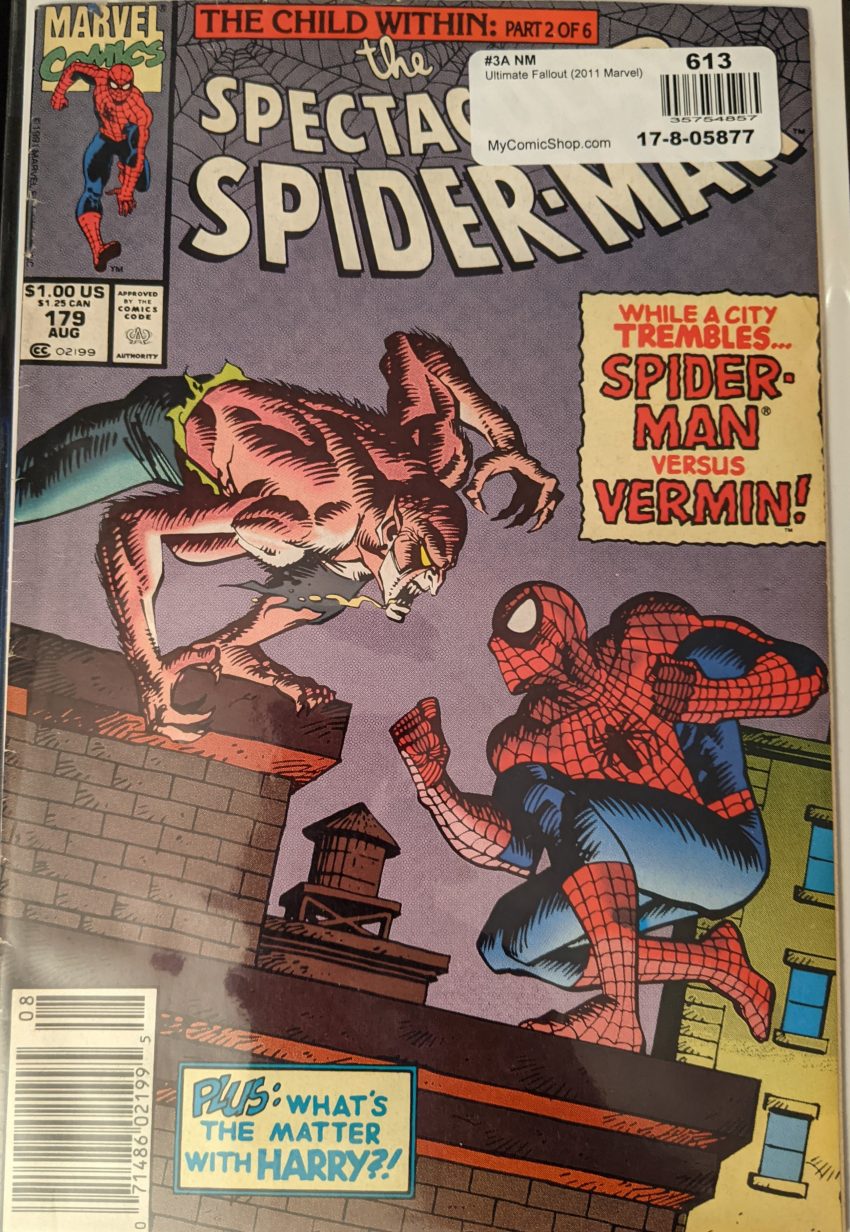 Sal Buscema, perhaps more than most, is a guy with a lot of go-tos in his art. Signature poses and layouts. But this cover is not one of them, and it seems striking as a result. Has a raw quality to it that’s cool. We open on more video of Dr. Kafka talking to Vermin, getting past his defenses and learning his name is Edward. Then it’s back to the present.

Weird, weird, weird. The guy shoots Vermin in the shoulder, rather unsurprisingly, and the little boy cries outside. Is the little boy Vermin’s imagination of himself as a child? That might be the only way this makes sense. Making sense would be a nice change of pace. Anyway…

Sal’s MJ just keeps getting more and more sexualized, but I guess when you’re running against Erik Larsen, you might feel like you have to. But I like DeMatteis continuing Bill Mantlo’s idea of this annual trip to Ben’s grave.

Oh yeah, he’s totally over “that Kraven business.” Elsewhere, Liz & Normie Osborn ride a merry-go-round, and the joyous kid waves to his dad, who is being berated by the imagined ghost of his father for coddling his son again. Harry argues that Norman and his Mom used to take him here and it’s good for Normie, and seems to break through his imagined Dad’s anger, but then he falls down dead and an imagined Spider-Man tells Harry his dad as sick and vicious and he should be happy he’s dead. Boy, Har, this is serious.

At night, the wounded and ashamed Vermin finds his way to the same merry-go-round and wrecks it, because whatever. Then we cut to video of Dr. Kafka entering Vermin’s room, calling him Edward, and getting him to hug her.

Spider-Man tells Dr. Kafka he’s been on edge since he heard Vermin escaped and that he’s covered the city and can’t find him. He asks her if she knows anything that can help. She tells him Edward was abused as a child.

This is fun, right? Great times. Vermin attacks Spider-Man, and Spidey is losin’ it. Deciding Vermin is an animal, wondering how long he’s been hunted by Vermin, as the battle gets really Buscema-punch-y.

Dr. Kafka arrives on the roof and talks Spider-Man out of his murderous mood. She says they’re both going to have to trust her and she offers Vermin her hand. Which he bites before running away, leaving his inexplicable rat army to attack her. Spider-Man helps her as the cops arrive, but Vermin is gone.

Poor Harry. This was inevitable, of course, but it’s still no fun. He’s been through a lot, and sure, amnesia is a cliche plot point, but it allowed him to find happiness with Liz and have a child and all that. You want to see these characters come out ok in the end. But that wouldn’t be very dramatic.