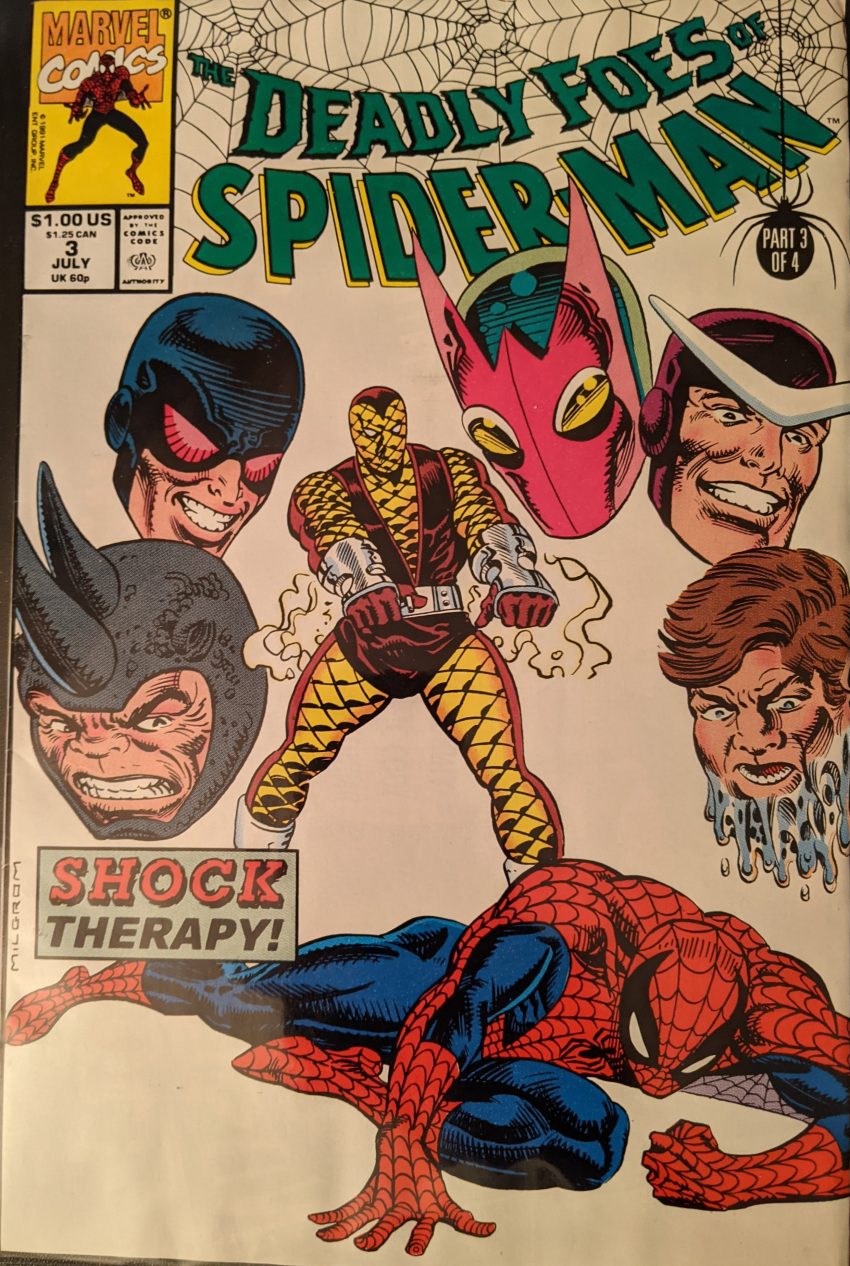 Will Shocker finally get over his fear? Or is this your traditional misleading cover? Only one way to find out. Al Milgrom is the sole penciler this month, and Mike Thomas tags in on colors. Spider-Man now has 8 seconds left on that bomb from last issue. As time runs out, he realizes this is a standard TInkerer design and this whole thing depends on a single circuit, which is all really ridiculous.

Saved the day with his intimate, split-second knowledge of how Tinkerer builds things. Sure. The next day, we catch up with The Sinister Syndicate, who are planning their next job when Rhino announces he’s leaving. Again. And it’s treated like a surprise. Again.

As the doofs walk off, Leila thinks they’ll pay, but then she notes a vent lets her hear what’s going on inside. Beetle is talking to Patridge, the lawyer from last issue, about Kingpin helping him get a man inside the prison. Then… why did they let him go to jail to begin with? Speaking of jail, we check in with Shocker, still living in fear, when someone yells “Justice is served!”

So this Partridge guy, who was in the prison, like, yesterday as himself, comes back as someone else and no one notices? Really? These guys deserve their prison breaks.

So Shocker shoots Boomerang’s shackles and frees his hands, and between the two of them, they take out any guards they encounter and get outside, right into the waiting van of Boomerang’s teammate. I am so confused. Oh hey, exposition:

Well, that’s way less interesting than what I was thinking. Ringer was killed when Scourge got a whole bar full of villains in Captain America, but the thing between him and Beetle was seen in TAC 58. And I still don’t understand why Fred had to go to jail to get broken out to get assassinated. Was Leila sent by Beetle? This makes no sense at all. Elsewhere, Rhino is undergoing some very comic book-y and painful zaps to get his suit off. The doctor estimates it will take 3 weeks of treatment, and the treatment leaves Rhino weak and tired. Days later, we find Boomerang and Shocker practicing with their gear in an abandoned building. Leila sees that his confidence comes and goes, and wonders if she can count on him. Shouldn’t people be looking for them? Didn’t Leila betray Beetle? Don’t Kingpin and Beetle expect to have Shocker and Boomerang killed? Hello? Too late, it’s night time, and the remaining Syndicate is breaking into a place to do a job.

Come on. Seriously? This is terrible. Beetle is worried the others will blame him for what happened and try to kill him, but they don’t. Hydro Man says he’s making them rich and they don’t care. How nice.

My goodness that last panel is bad. Wow. Boomerang sure has accepted his “girlfriend” was just using him to get to Beetle pretty well. Well, so, the boys head to “a house in the Adirondacks,” and Rhino is inside, but busting out to get them, assuming Beetle sent them. Shocker freezes up and Boomerang barely survives, but then Leila runs in, explaining she got a tip he was here (From who??????), and then explaining the whole deal. Rhino buys in, but the next day…

The friggin coincidences in this book are KILLING me. And almost killing Shocker. What luck for him that his constantly vibrating suit saved him. I thought the point of the suit was to not vibrate when the gauntlets were firing? Ah, well. At least we’re not having his vibro-shocks not require the gauntlets anymore, that was stupid. Spider-Man sure is getting jobbed out a lot in this book. I guess he has to.

One has to assume Kingpin is playing both sides against the middle here. But, then, the Leila thing turned out way less interesting than I assumed, who knows?