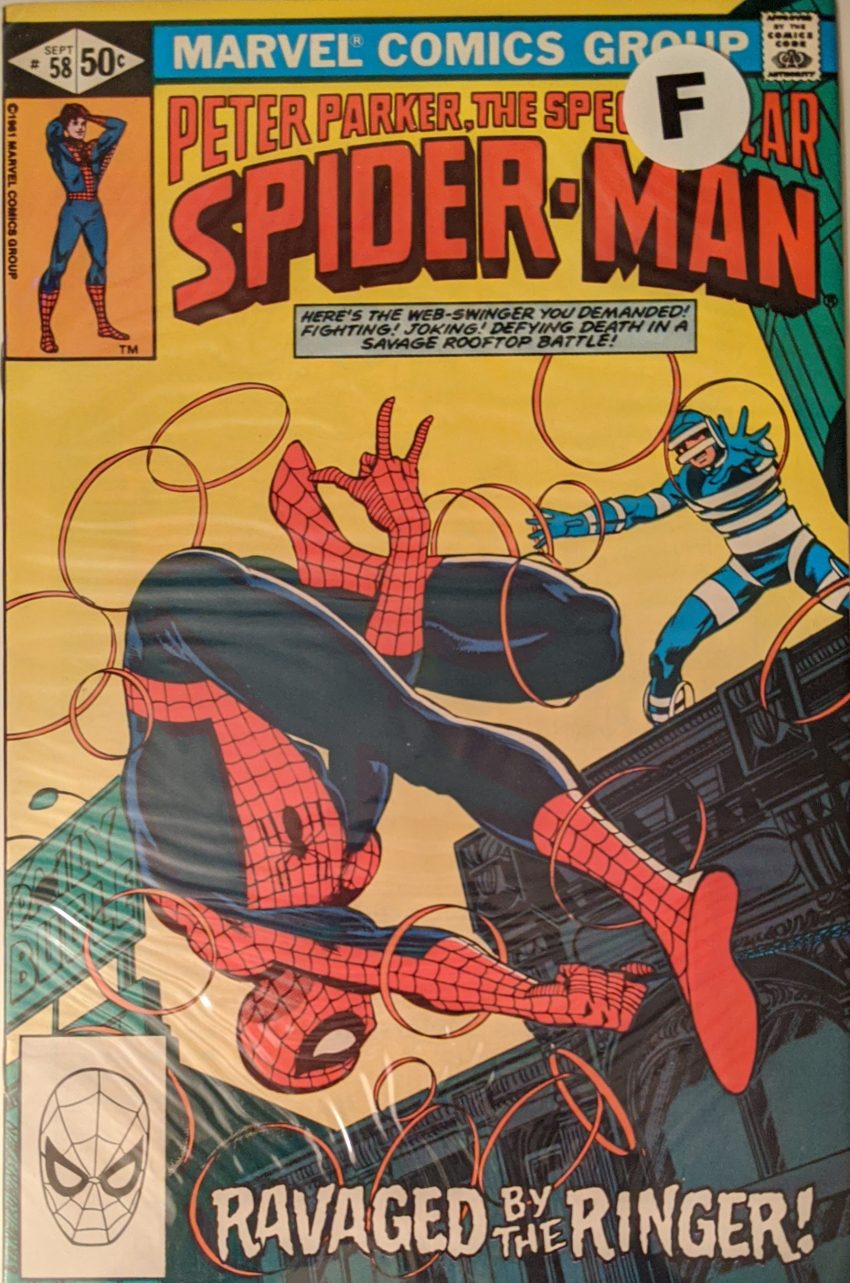 John Byrne and Vince Colletta come through the endless revolving door of artists on this book this time. Apparently Marie Severin was meant to be the sole artist during this run, but she kept getting pulled away for specials projects, so they kept scrambling for replacements. Severin wore a lot of hats at Marvel in this era, so that’s not too weird. Anyway, it’s Byrne returning to Spider-Man for the first time in awhile as a ringer to tackle… The Ringer. Eh? Ehhhh? Fine. We get going with Peter Parker walking through campus at ESU, musing about how it’s a new semester already, when a kid late to class comes barreling past him and trips.

Elsewhere, some cops are guarding The Tinkerer’s warehouse Spider-Man busted into back in TAC 53, and The Ringer is mad, because The Tinkerer was supposed to have some new gear for him inside. He manages to get up on the roof and sneak inside, where he finds his stuff.

This guy just breaks The Ringer’s, well, rings, remarking about how impressive they are, before knocking Ringer out. The mystery man decides he can use The Ringer in his own nefarious plots, and takes the big crate he was after and the Ringer’s unconscious form out the hole he made in the wall. Back at ESU, that Greg kid really liked Peter’s Chem 101 lecture, and has changed his mind about chemistry in general. Must’ve been some lecture! Peter walks down to the faculty offices, where Phil Chang is staging a grim trial for Steve Hopkins. After the humiliation he visited on Marcy Kane awhile back, Phil thinks Steve should be punished. Deb Whitman is on hand to produce a list of crimes and say she hopes they throw the book at him. Even Dr. Sloan is in on it, helping a veiled figure referred to as “the victim” into the room.

Well, that’s some business. Dr. Sloan says he’s proud of all the kids and wants to celebrate the beginning of a new semester. Then Pete takes Deb aside…

Place yer bets, folks. Will this date happen? I don’t think their relationship could come back if it doesn’t, but this is Deb Whitman, this is what she’s for. You’ll see if you’re right in a bit. Somewhere else, The Ringer wakes up tied to a chair.

Pete thinks, “If I can help it, I’ll never stand that lady up again,” then goes swinging off, eventually swinging past a sullen, waiting Ringer. He has a little radar that’s supposed to beep when Spider-Man’s around, and it works. Ringer is puzzled as to how his mysterious tormentor could know Spider-Man would swing by here, and unhappily jumps into battle. Byrne must have really liked the Spider-Man figure he drew for the cover, because he repeats it on the inside…

When The Ringer tells him his name, Spider-Man just laughs, which probably doesn’t help. Spidey decides to just leave, but his frantic opponent demands they fight, since his life depends on it. Spidey is mostly just keeping him at bay.

A very confused Spider-Man swings away without issue, and guess what?

He did it! Who won the bet? But look at him now, playing with fire. Can he not stand Deb up twice in one night?? Anyone got money on this one? So, soon enough, Spider-Man relocates The Ringer as he is frantically searching for Spider-Man. It is once again a pretty one-sided conflict…

My middle! The thing pops, but doesn’t explode. It just smokes for awhile. Spidey drags Ringer to a police station, where he beg to be locked up for his own protection from whoever put him in this position. And then guess what?

He made it! Good for you, Pete. And look, the all-new, far-less-silly-looking Beetle! This is the debut of his modern suit, and it’s about time. Did you notice how big Byrne was drawing the eyes on Spider-Man’s mask? Pretty unusual in this pre-McFarlane era.