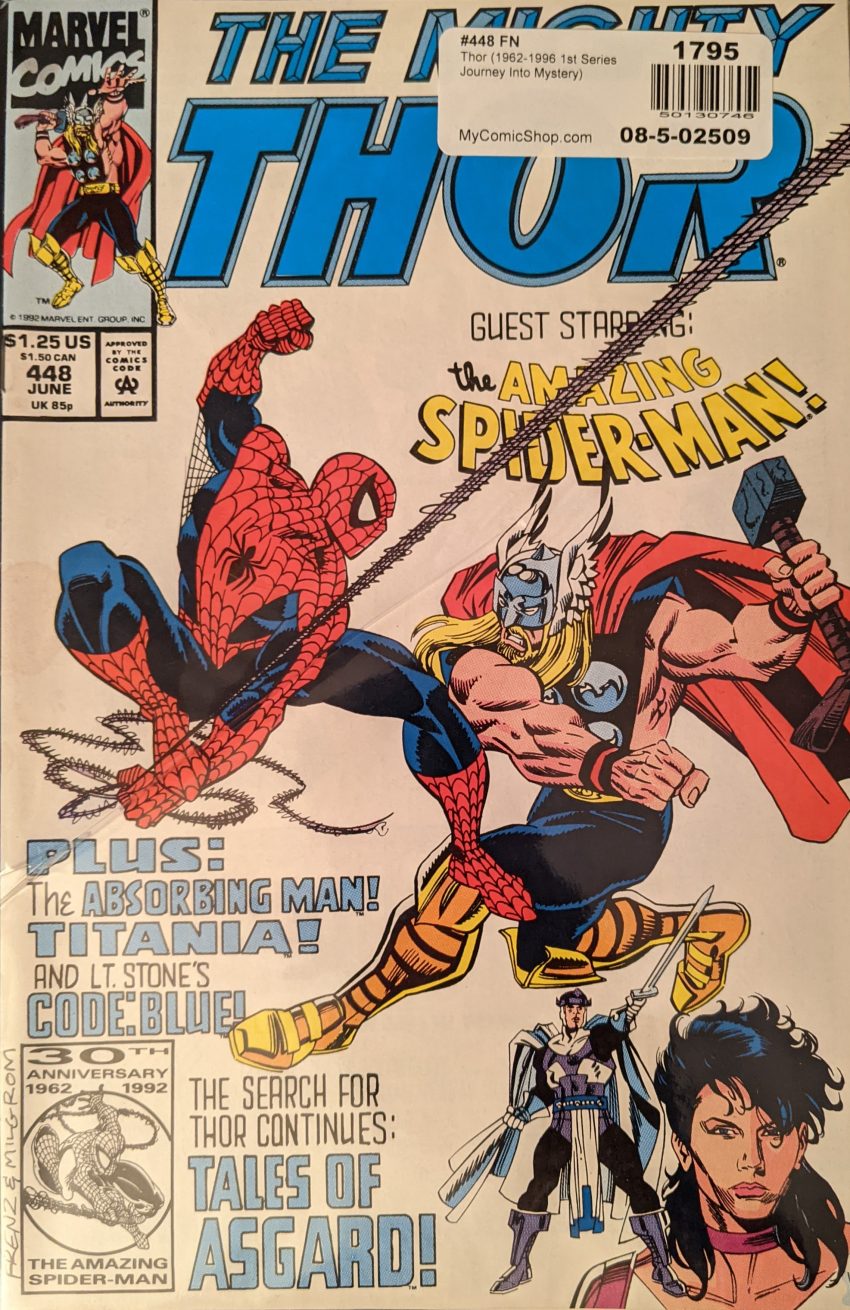 Really not gonna make Code: Blue happen, but gonna keep trying! Spider-Man kicks Thor in the face to get this Two Heroes Fight Over a Misunderstanding started. Titania runs as everyone else recaps last issue and Absorbing Man becomes made of steel to try to smash Spider-Man.

Now why did Tom feel the need to imply an “eye-blurring triple somersault” when he clearly just turned around and hit Thor? Creel seems oblivious to the fact that Titania is onto him. But that’s not what sells this issue, it’s the hero fight, so…

Uuuuggggghhhhhhhhhh, is there anything worse than someone doing something that is cliche and lampshading it like that’s an excuse???? BLAH! I must concur with Spidey’s appraisal of this Thor. Cut away to Asgard business that’s none of ours and then to Absorby and Titania on the run. As soon as they think they’re clear, Titania belts Creel into a construction site for lying to her, and over his protests that he was just trying to help, starts really beating the crap out of him. But don’t worry, Creel, the heroes are on the way. And along the way, Spidey accidentally lets Eric know he’s not getting the Avengers’ stipend. Man, this guy is a real loser.

Did these 2 hate each other so much when they met in that one Spider-Man Unlimited I forgot about til just now? What was that? SMU 6. Looks like they did get along better there. Totally forgot that one. That posted December 2019, can you believe I’m still doing this? Anyway.

“Looks it’s… just some cops in dumb shoulderpads!” We cut away to some people in a hospital whose deal I do not know or care about and then back to the fight, with Creel and Eric racing for the hammer. Eric has Don Blake’s old deal, where if he lets go of the hammer for more than a minute, he becomes normal again. But before either of them can reach it, Code: Blue shows up and starts shooting at them. What, did they teleport? They were still at the police station after Thor dropped the hammer he can only let go of for 60 seconds. A lot of teleporting going on lately. Creel almost flattens the idiot cops, but Thor deflects his wrecking ball with Mjolnir. Then They start shooting Creel with their special steel bullets they have for some dumb reason, which of course turns him back into steel when they hit him, and then he wipes the floor with them until Thor decides to, like, do anything else.

I don’t get Spidey’s joke. Creel lunges at Thor, apologizing, saying he’s starting to like him, but he needs the power of his hammer. In a desperate ploy I don’t think makes any sense, thor turns back into Eric right as Creel touches the hammer, catching Creel “in the backlash of magical energies” and stunning him. Uh, ok.

Spidey sure faded out of the picture in this one. What was he doing during the climax, just hanging out? The rest of the issue is Asgard stuff of no consequence to this blog. As we’ve seen, eventually Thor will return, and Eric will become Thunderstrike, the Dr. Rocket of superheroes. The end. Next post it’s back to ASM for the latest appearance of one of my least-favorite characters!