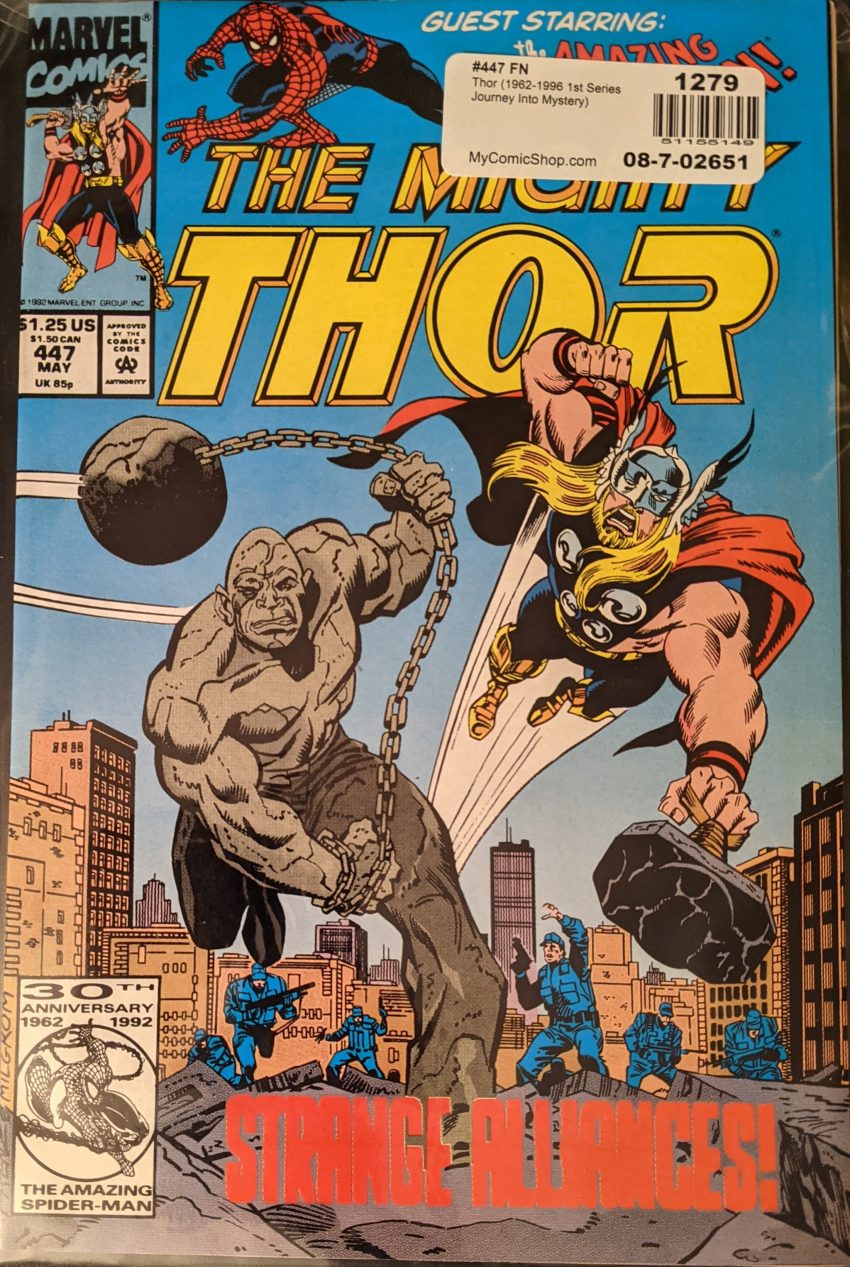 Yep, more Thor. Yep, DeFalco & Frenz, back again. Even now 5 years removed from their run on ASM, they just keep popping up. Last time their Thor run cropped up on here (#391), Spidey accidentally met construction worker Eric Masterson. Now Eric is Thor, due to Reasons. But his deal is the opposite of when Thor used to transform into mild mannered doctor Don Blake, or even fellow construction worker Sigurd Jarlson. When Eric becomes Thor, he’s got the power, but not the persona. He has to try to fake the Asgardian faux-Shakespeare accent, hoping no one notices. He’s even wearing a mask on his helmet, presumably because he doesn’t even look like Thor under there. Bit of an unusual twist, if you didn’t mind the title character being replaced by some random guy. DeFalco & Frenz are joined by Al Milgrom on finishes and Mike Rockwitz on colors. We begin with Titania robbing an armored car and getting away with it. But she worries her beloved Absorbing Man wouldn’t approve. He, meanwhile, returns to their home, and finding her absent, rummages through her stuff to confirm she’s been stealing again, and is not happy.

Sparky. The Lightning Kid. Ok! Operation Galactic Storm was a massively bloated crossover event that saw The Avengers go to war in space, don’t worry about it. Hey, guess who’s on the next page?

Tired of aping Ditko, I guess, Frenz gets in 2 standard Sal Buscema Spider-Men in as many pages. Sal has probably drawn the spidey in panel 2 of the second page literally a hundred times, and by now I’ve probably posted several of them. Maybe I should’ve gotten into comics just copying somebody, seems easy enough. Creel seems to know this isn’t the real Thor. He says this Thor gave him and Titania a chance to leave their criminal lives behind recently, but now that she’s out stealing again, he wants to have Thor scare her straight, as it were. He says to meet them at 8:30, and leaves a newspaper article implying they’ll try to boost the golden bull from the Guggenheim Museum. He also told the wait staff Thor would cover their meal. Nice. Thor is forced to give them his cape. Pretty silly. He returns to Avengers Mansion and walks into Cap in the middle of a dangerous training session. I just saw this set up in a 60s Cap comic a few weeks ago.

We cut away to some Asgardian business that will have no bearing on this story, and then…

Well, that’s convenient. The heroes and villains all converge on the museum, only Spidey is just as in the dark as Titania about the true purpose of this exercise. Doesn’t take a genius to see where this is headed. Spidey sees Creel conferring with “the new Thor” and is shocked (Does everyone know he’s not the real Thor? Why does he bother pretending, then?). Creel rejoins Titania and they smash into the museum. Thor is condoning this? They begin to steal the bull, and so…

Eric really sucks at this.

Time for an old school Two Heroes Fight Over a Misunderstanding. Oddly, the rest of the issue is split off into a “Tales of Asgard” backup feature, which is not uncommon in a Thor comic, but it continues the subplots they cut away to in the middle of the main story. Why even interrupt the main story like that if you had this? Weird. But, that’s not part of this blog.