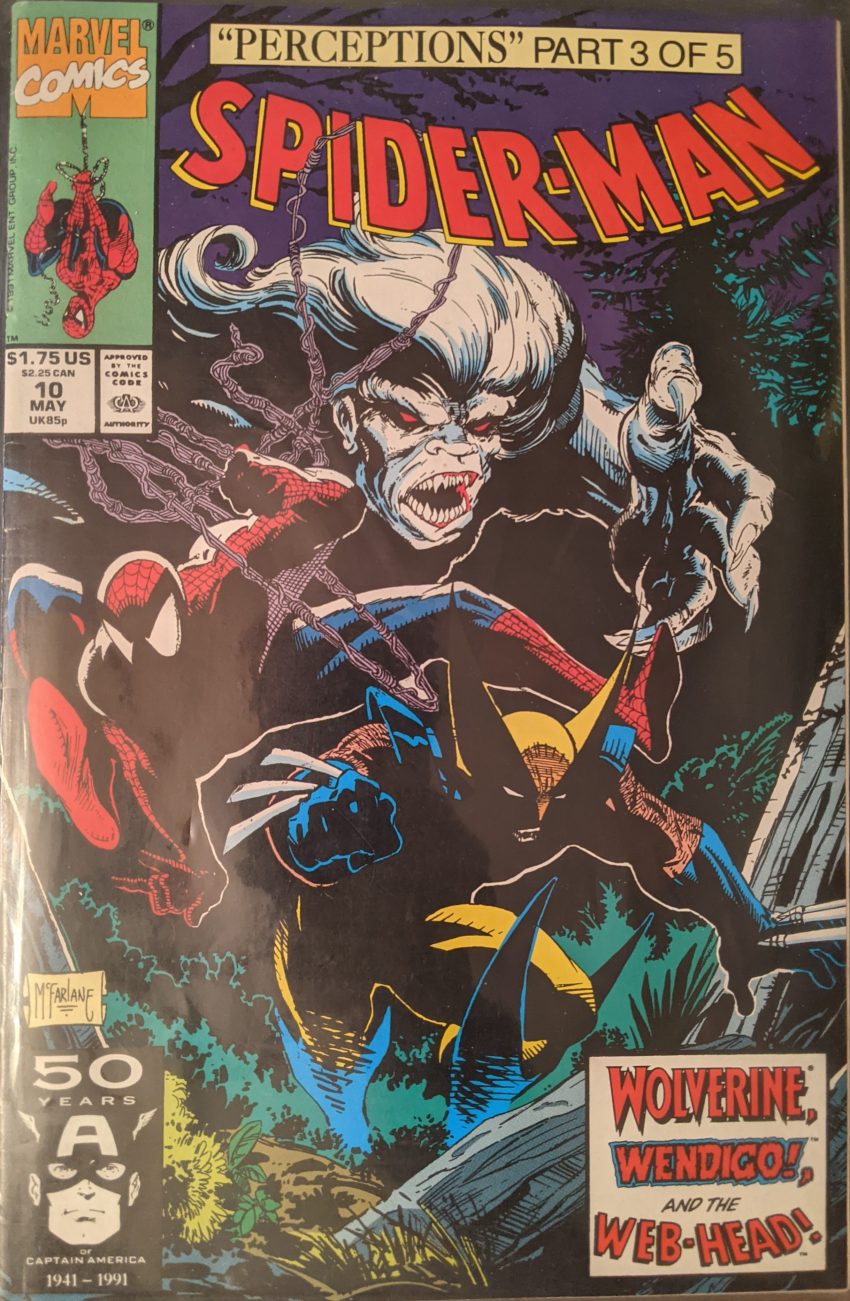 We’re back with Wolverine running to go save the hunters who shot Wendigo, thinking, among other things, “A few dead kids and all sense of reasoning disappears.” Yeah, man, it’s only a few dead kids, what’s the big deal? Inking this month is credited to “Todd and friends.” In a 2-page spread across pages 2 & 3, Wendigo is… I guess defending himself? It’s weird, hunters are flying everywhere, but he’s not touching them. Todd, I have only been realizing on this re-read, isn’t great at action. A bit better here:

I don’t know all that much about The Wendigo, but I know it’s fought Hulk multiple times and Wolverine multiple times and both of them at once one time, all in the era before you could show much violence, so he never got too injured. The idea that he could do all that and isn’t bulletproof seems a stretch. Even though it looks like he’s shredding those dudes, all but one just run away on the next page. Wendy is about to get that guy when…

“A banshee?” “A noise like broken glass across sheet metal?” Is Todd implying Wolverine lunges into battle going “EEEEEEEEEE?” Wolverine tells the guy to leave, and he does. Logan isn’t using his claws, doesn’t actually want to hurt Wendigo, just keep it busy til all the dudes escape. Meanwhile, MELVIN GOONER wakes Peter Parker up in the middle of the night because some of those guys are already back in town? Except Wolverine is still fighting Wendigo on the next page? What, did they teleport? I’m thinking Todd has only fully inked one page so far. Seeing all the different approaches is interesting. Some are so close to his own only the most minute details make me think it’s someone else. Others are way, way different. Can’t hazard a guess most of the time.

On the next page, a surviving hunter is grilled by a mob of reporters, and new, sensational news headlines are shown, and on the following page… Logan is still fighting the Wendigo. Time is an illusion. Logan rips his shirt off and screams a challenge at Wendigo, and that makes the creature pause. Then it slowly shuffles back off into the woods to heal.

Somehow, Peter doesn’t know who that was. As he switches to Spider-Man some 2 hours later, he thinks the voice sounded familiar, and the guy didn’t set off his danger sense. Then he spends 2 pages swinging into the woods saying things like “I don’t know anyone in Canada” like he’s just clueless until…

(Several documented cases of them meeting with him in that suit on this blog, but proceed) Wolverine tells Spider-Man he wants him to help take away the motivation for the various people making a spectacle. Spider-Man says he’ll need facts. It’s very stilted dialogue. Then Wolverine finally mentions some useful info:

These days, these would’ve been 2 pages of 9-panel talking heads. I think I kinda prefer this method, in fact.

One of the last 9 pages of this issue was necessary to tell the story, or offered anything of value whatsoever. Goodness. On the letter page, Todd says he was sick for a week and a half, and so had to call in some inking support. The pages were finished by Rob Liefeld, Jim Lee, Scott Williams, and Rick Magyar. One of those names is not like the others. But I think I can guess who did what with the names. I couldn’t have back then, tho, and that’s too bad, because editor Jim Salicrup mentions one random letter writer who guesses them all correctly will receive a page of original art. That’d be an actual investment, unlike these comics people were buying as investments (A guy in the letters says he bought 3 copies). 2 more issues in this storyline. 3 issues and only 1 fight sequence! Literally no one else would’ve been able to get away with that in a Marvel comic at this time.