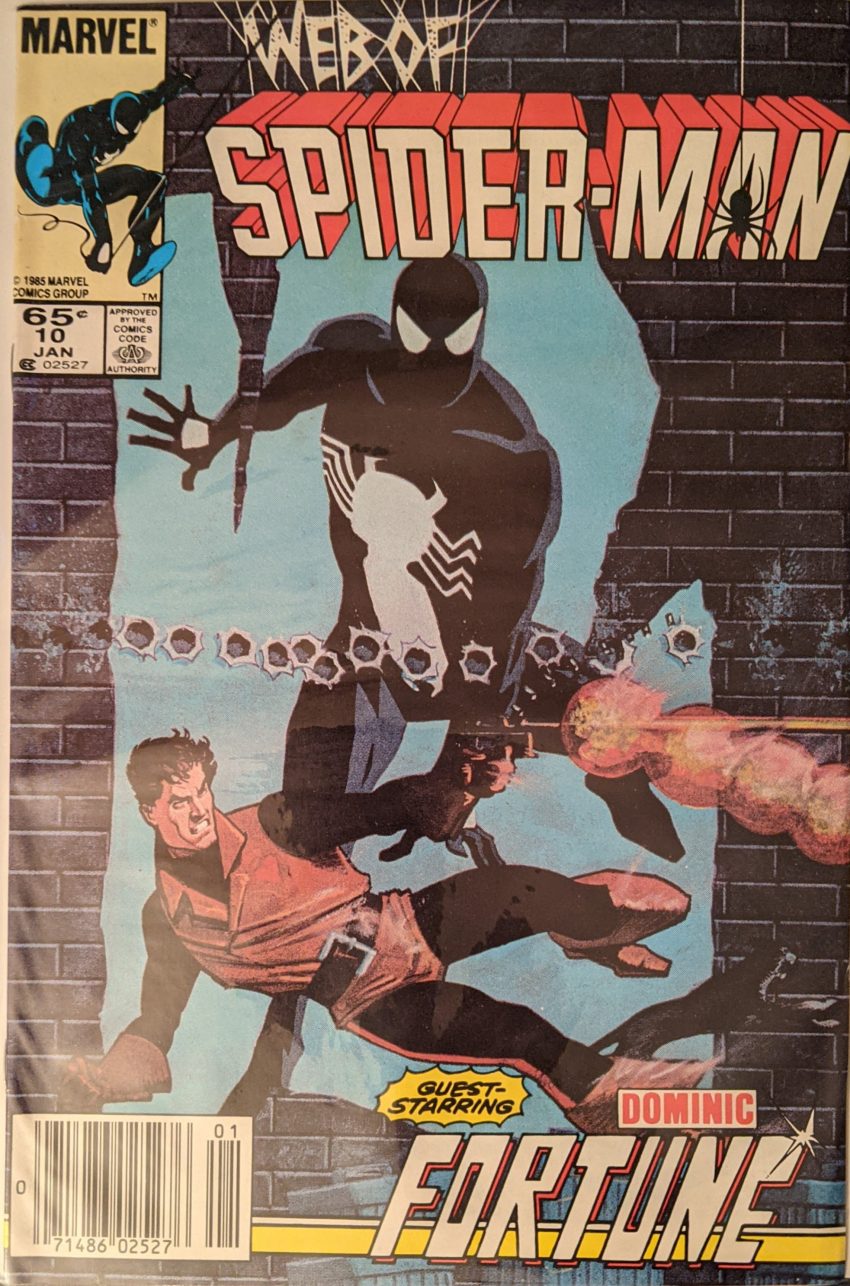 As of this issue, we’re caught up with where Spectacular left off in Block 24. Time once again to check in with our old pal, Dominic Fortune, behind a cover by his creator, Howard Chaykin. Spidey last saw him in MTU 120, and we last saw him several years hence in Web 72. Teaming Spider-Man so often with a guy whose glory days are well behind him is a bit odd to me, but let’s see what the angle is this time. Danny Fingroth writes, Jim Mooney pencils & inks and George Roussos colors. We start with a summary of his whole deal, which goes way out of its way to make sure you know in 1940, he did not care about Hitler or the Nazis until they stole some plans from his current employer, which led to him and his improbably named gal pal Sabbath Raven fighting a bunch of Nazis and getting the plans back, which it implies somehow freed France from the Nazis? I don’t know.

Meanwhile, Spider-Man is swinging around, beating himself up for taking the gold notepad, as he loves to do right now for this ridiculous subplot. Toss it in the river if you feel guilty and sell it if you don’t, man, move on. This is month five of this so-called storyline (Which started back in ASM 268). Anyway, as you might expect…

Certainly not me! I have no idea why this keeps coming up! It was JM DeMatties behind MTU 120, but this and the future Web storyline are both Danny Fingroth. Guy must love Dominic Fortune. Speaking of whom, he’s in the hospital, and his son is trying to get him to move out of the city when Peter Parker shows up. He says fighting off those goons has made Dom “quite a celebrity” (How?) so he’s here to get some pictures for The Bugle. Dom’s son storms out in a huff while Dominic recaps how he ran into Spider-Man in MTU 120 and it gave him a new lease on life. Now he’s dedicated to finding Sabbath. Peter mentions his Aunt runs a halfway house now, but Dominic’s not having it. As Peter leaves, his son is out in the hall, angry about his dad putting himself in danger. It’s weird to be reading the middle I didn’t know existed of a story I’ve already seen the beginning and end of. Anyway, meanwhile, Steele the Nazi and his goons go to the home of a man he wants to hire, because Steele says seeing someone’s home tells you a lot about them.

Steel is sold, and Shocker is passed a contract to kill Dominic Fortune. But he’s also secretly recording their meeting, so if anything goes wrong, he’ll take Steele down with him. Steele tells him if Spider-Man interferes and he takes Spidey out, too, he’ll get triple. Steele plans to doublecross Shocker, and Shocker pretty much knows it. What a good working relationship.

Wait, The Bugle really did want pictures of him? I assumed that was just an excuse.

So we move ahead to Dom at the airport, going to board a plane (on the tarmac?) and Peter watching, saying he came to talk him out of it. But then Pete sees The Shocker emerge from hiding to make his move. Shocker zaps Dominic, but he plays dead to try to sucker punch his foe. That doesn’t help much, but the appearance of Spider-Man does.

That is ridiculous. I’m glad no one else seemed to carry on the “I don’t need the gauntlets I wear” idea. Steele’s goons see Shockie is ignoring Fortune and come out to take care of him personally. Dom shoots one of them in the knee, but the other is about to run him down in a luggage car as Spider-Man is being choked to death by Shocker.

Spidey beats Shocker by simply ripping his shirt off, removing his vibro power as easily as he would removing his gloves. Dominic Fortune is once again on his way to the hospital, and Shocker’s going to jail. But, he thinks to himself, either Steele will bail him out or join him there with the precautions he took.

Hired goon fail you? Blow up his house. That’s pretty harsh. Kinda wild Fingroth hung onto this for 62 issues more issues. And that this even happened some 60-odd months since MTU 120. I guess Dominic Fortune and Spider-Man can only cross paths every 5 years or so…