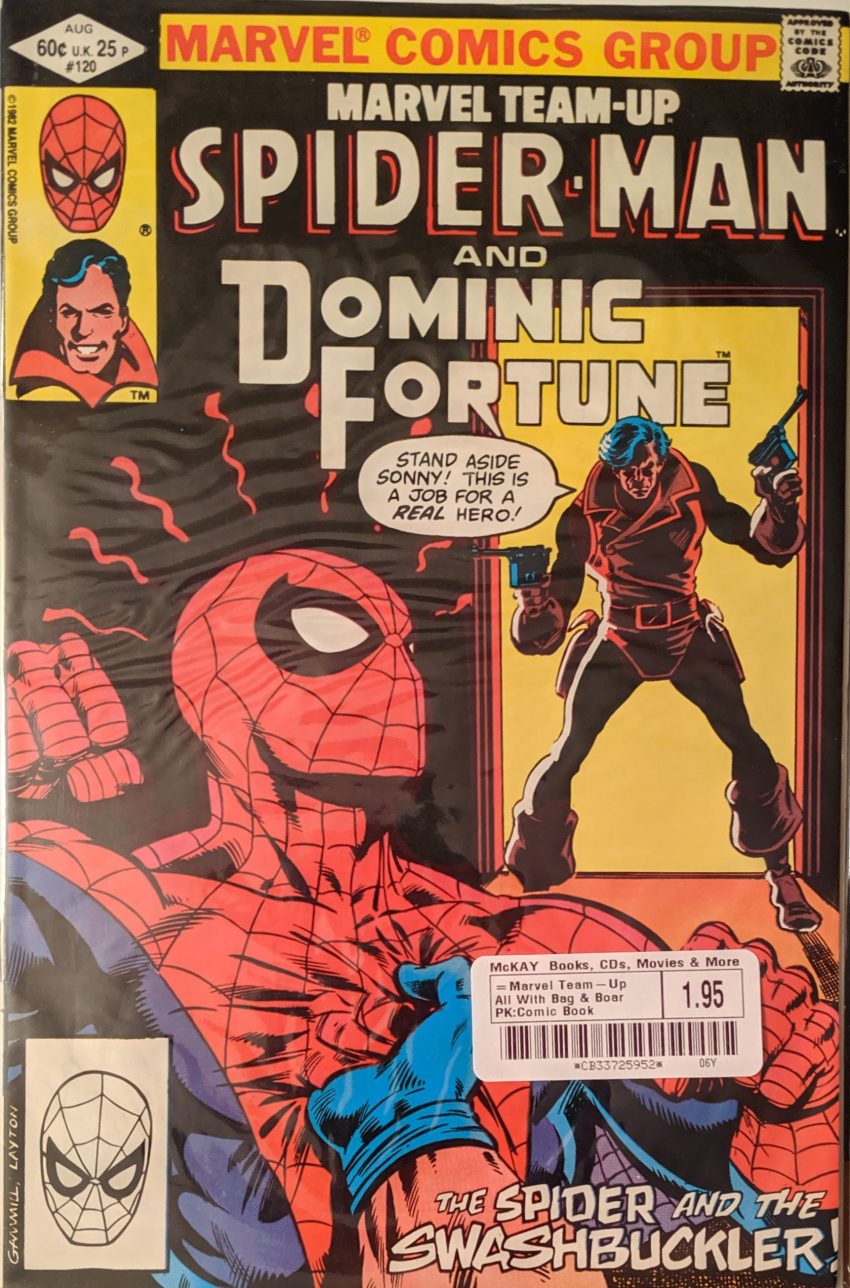 The blog debut of Dominic Fortune. Now here’s an odd one. Not really in-universe, but behind-the-scenes. When founder Martin Goodman sold Marvel Comics in the 70s, he did so with the stipulation that his son retain the publisher job. When that didn’t happen, Goodman, seemingly out of nothing but a desire for revenge, started a new comic company called Atlas, one of the many older names for Marvel. He lured some big names to it, promised big paydays and rushed out a whole line of books with the intention of eating into Marvel’s sales. Anything Marvel was doing, he did. Superheroes, horror, sword & sorcery, whatever. Just on a smaller scale with no brand recognition. This was a catastrophic failure. None of the books made it to issue #4. The company began and ended within a year and a half. What’s that got to do with anything? Comics legend Howard Chaykin did 2 issues of a comic there called The Scorpion, and when things went south, he more or less renamed that character Dominic Fortune and brought him to Marvel. The characters look almost identical. Dominic Fortune is an aging mercenary and adventurer who has wound up doing a lot in Marvel comics. Still JM DeMatteis, Kerry Gammil, Mike Esposito & Bob Sharen at the helm. We begin with Peter visiting Aunt May in the nursing home, where she’s having a great time singing with Nathan Lubensky.

That’s sweet. That’s as great a portrayal of Aunt May as you could as for in this era, and it’s nice to see them having so much fun after last issue. Can’t please everybody, though.

Thought I’d throw in that page just to get some background on the character in here. Would that we all could be brigands-for-hire. Also: Sabbath Raven. Haha, ok! Dom is feeling sorry for himself and wondering whatever became of… of Sabbath when he sees a man riding a 2-seater bicycle through the sky outside with a dummy on the back. And that man… is a villain named… His name is Turner D. Century. I know. It was very hard for me to type. I had to sigh heavily while doing it. Fortune finds his old gear, suits up and takes off.

Nathan actually cheers him on as he slides over a car like he’s on Miami Vice, excited that “he’s got some fire left in him.” Nathan is A+ in my book. Aunt May scolds him for encouraging the old guy, then turns around to find Peter has disappeared. He’s on the roof suiting up as Spidey, of course. He’s on his way before he remembers Nathan has his camera, so he won’t be making any money off this one. Nearby, Fortune has caught up with… Turner D. Century. Woof. He says he knows all about the guy.

Where is the rest of that guy’s barbershop quartet? Turner hits Fortune with his umbrella, knocking him off the roof and leaving him hanging onto the edge. Century is mortified, saying he didn’t mean it, that he respects his elders, and that he’d like to make it up to Fortune by letting him ride around on his flying bike with him. Fortune thinks this is a good way to keep an eye on the weirdo. Spidey sees them flying by, but can’t believe it. He follows them to a building and peeks in the window.

THE TIME HORN! I am going to lose it on this one.

Good acting down there by Gammill. Century whacks Fortune in the head one more time for good measure before heading out to kill everyone under 65. With his TIME HORN. This is absurd. Fortune can’t get Spidey to wake up, so he’s got no choice but to go after the goofball himself. Fortune slowly regains his confidence as he leaps through the city like he’s Daredevil, and then he catches up to Century, who’s already… honking his stupid horn at the citizens of New York.

Fortune appears to have a heart attack and die, and Century is sad. But he decides to go through with his plan in Fortune’s name “as soon as I find out what your name was!” Then Spidey shows up.

Will Dominic Fortune find his long-lost lady love? No idea!  But this is not the last time we’ll see Fortune team up with Spidey on the blog. Two months in a row of JM DeMatteis: Champion of the Elderly! It’s a cool position to take, but an unusual concern for superhero comics.