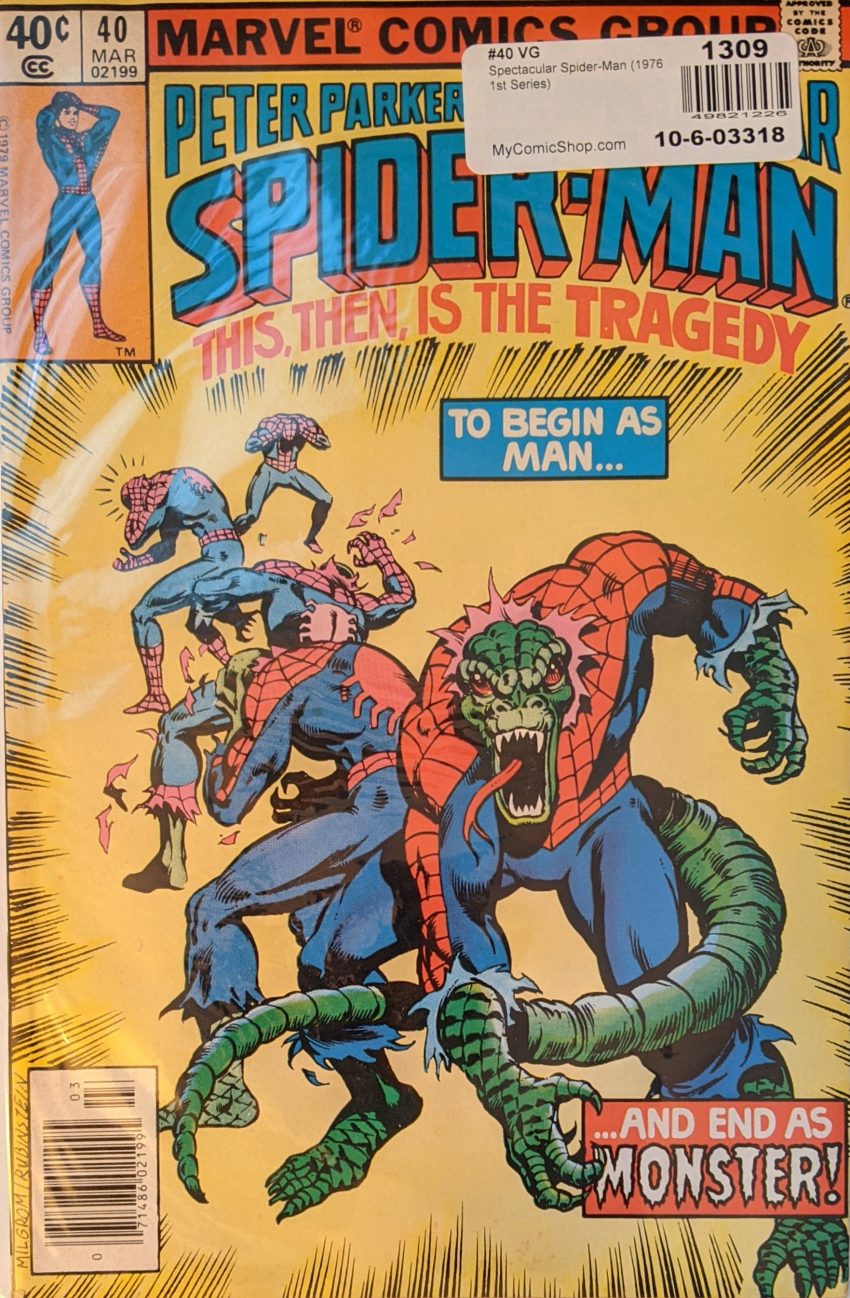 Sadly, Romita, Jr. is not hanging around for part 2. This month’s art team is Frank Springer & Ricardo Villamonte. Been a bit since Springer was on TAC, let’s see how that goes. As our story begins, some guys boosting car parts are interrupted by The Amazing Spider-Man. But, there’s a catch:

“We ain’t got time to puzzle it out!”

Springer’s art really changed during the 70s, I guess. That super cartoony look he was known for seems to be totally gone, as as we saw in WEB 52, it stayed gone. Curt recaps last issue for us as Spider-Lizard prepares to drop a water tower on him. It barely misses, and Spidey is gone. We make a surprising cut to The Daily Bugle, where staffers try to inform JJJ of a Spider-Lizard, but he’s too busy being crazy right now to listen. Then we cut to The Daily Globe, who have (somehow?) gotten photos of Spider-Lizard in action on the front page. Bushkin laments that no one could get ahold of Peter Parker, but I don’t see why. They got him from all angles, close-ups… who needs Peter Parker? And who took those pictures? Elsewhere, Spidey broods. The creature doesn’t really know who or what it is, and keeps having flashes of the faces of his friends & loved ones. While he does that, Curt Connors finishes Ye Olde Anti-Lizard Formula, and hopes he can get Spider-Man cured.

Is the regular Lizard bulletproof? I’ve never wondered before. More cops arrive with tear gas and what looks like machine guns, but none of it has any effect. Really??? Why is Spider-Lizard so much more formidable than regular Lizard? The plot gets more and more Hulk Vs. The Army until Spidey escapes into the sewer, just as Curt arrives on the scene. But Curt knows a thing or two about Lizards, so…

The art team is really giving the horror vibe their all this month, this stuff is really working. Curt tries to reason with Spider-Man, but the creature picks him up and prepares to tear him in half… until it feels a pang of guilt, a last vestige of Peter Parker, and drops him. As it walks away, Curt Connors… produces a 2nd vial of serum from his belt? Why’d he act like Spidey was doomed before?… and leaps on Spider-Lizard’s back, forcing the serum down his throat just as Spider-Man has done for him so many times.

Surely webbing his face and hair has to hurt. Spider-Man has to use all his strength to rip the bars loose, as poor Curt starts to drown behind him, but he does it, and the pour out into the river.

Quick wrap up. They really tried to make Spidey seem as heroic as possible in the last couple pages to counter the rampage, I guess. This was a good looking issue. Makes me hope to see Ricardo Villamonte in some more credits in the future.