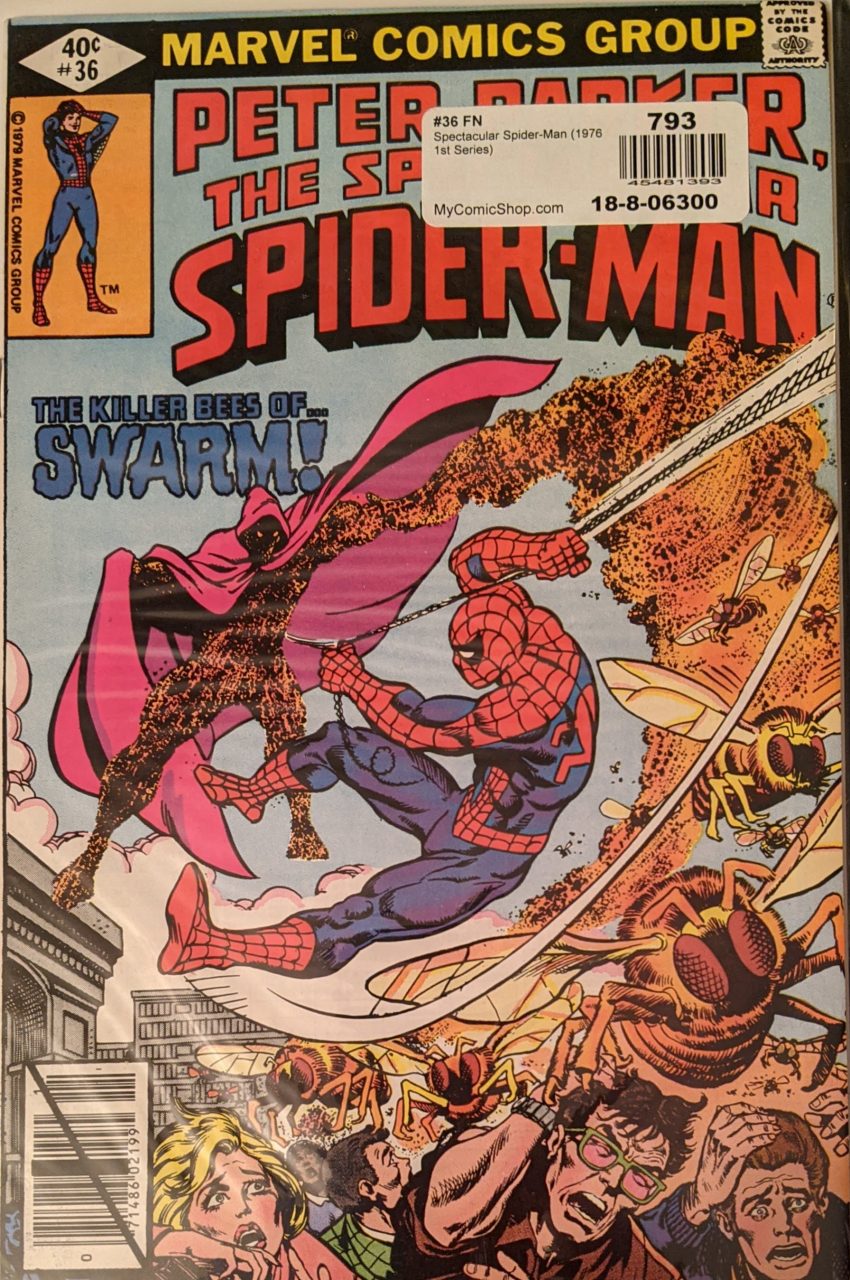 Now there’s a Ditko-inspired Spider-Man. And Swarm, the Nazi swarm of bees that walks like a man, last seen in these parts far in the future in Sensational #9. I believe this will be he and Spider-Man’s first meeting. But not yet. First, in this issue by Bill Mantlo, Jim Mooney & Mike Eposito, Spidey is hot on the trail of some bank robbers.

In the 60s or from the 80s onward, Spidey would have stopped this van in 2 seconds, but in the 70s, even the most mundane crimes are made to seem difficult for him to stop. He peels the roof off the van with his incredible strength, and yet it somehow still takes him THREE MORE PAGES to stop the van. I mean, come on! As he leaves the scene, wondering if he’s getting sick because he feels hot allofasudden, we move to ESU, where poor Deb Whitman is under her desk looking for her shoe and bangs her head getting back up.

So this is Deb’s 2nd appearance after a brief introduction in ASM 196, and the intro to Steve Hopkins. Filling in the college cast nicely. When’s Phil Chang gonna show up?

The casual discussion of Dragon Gangs and superhero battles is very funny to me. Who’s Chip Martin, tho? Obviously he won’t be hanging around since I haven’t seen him before. The boys walk by Dr. Sloan’s lab, where he and Marcy Kane are hidden away looking at the skeleton of Fritz Von Meyer, Swarm him/itself! Dr. Sloan recaps how he got his powers from a swarm of bees irradiated by a meteor and became a supervillain who’s bothered like the Champions. He notes that Swarm was defeated when Hercules chucked the queen of the swarm in to the ocean and the bees followed, leaving behind just the cape & skeleton. The queen bee is enormous! Bigger than Herc! What? Why??? Anyway, now Sloan has the skeleton and wants to study the effect of radiation on bees “for the good of mankind,” despite Marcy’s very reasonable objection that these things almost wiped out Los Angeles. Elsewhere, Pete & the boys are getting lunch in the cafeteria. Peter spots Curt Connors and briefly recaps their last meeting in TAC 32 with The Iguanan and whatnot before Marcy Kane comes running in badly injured. Goodness, what could have happened?

That escalated quickly. Spidey notes the bees seem confused by his “spiderness” and don’t attack at first, but eventually decide he’s a human and come for him, too. As he tries to get to the source of all this, we see Chip Martin talking about the glorious power building up in him. That can’t be good.

HAS HE HEARD WEIRDER? WHEN?

Man, I have no idea what his plan was there. Seems like maybe Bill didn’t, either. That really reads like the Marvel Method gave him a sequence he didn’t know what to do with. Is this the end of our hero? I mean, probably not, but we’ll see. The letter page is remarkably far behind, talking about TAC 29, still in the mystery of who Carrion is. Someone thinks its Ned Leeds, for some reason? And editorial mentions Carrion was inspired by the name of the song “Carry On, My Wayward Son,” which is just… ridiculous. But it certainly explains why his first appearance was called “Carrion, My Wayward Son.” Just… put it out there…