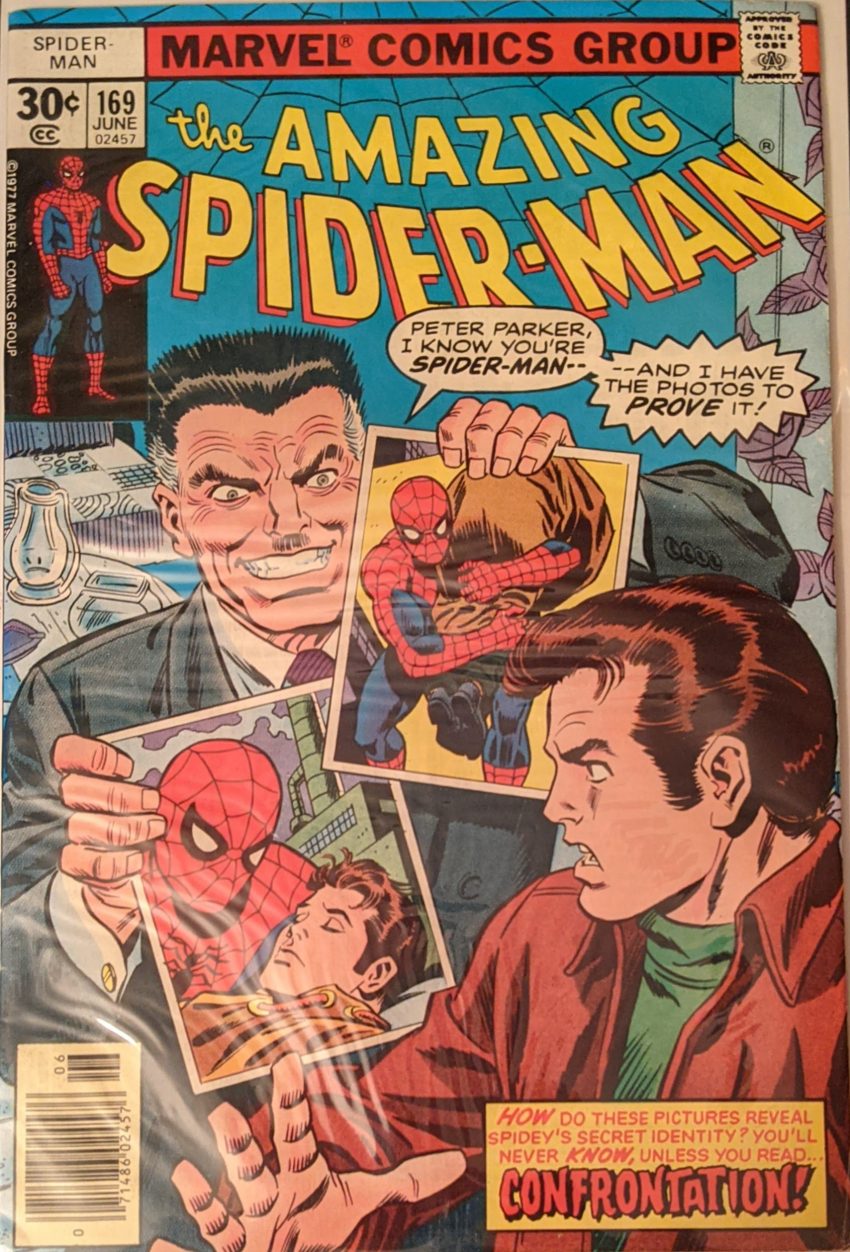 This one sure was allowed to simmer. 18 issues after Peter got rid of the clone, like half a year since JJJ came into possession of the photos, we’re finally gonna see what’s what. But not yet, because this story begins with Spidey discovering a hole in the bottom of his boot right as he sees  a police truck drive by and toss the cops out of it.

Ross Andru’s superhero action just continues to reach new heights of awkwardness. This is not a man in the Kirby tradition. Like the onion dip joke, tho. Meanwhile, at Marla Madison’s lab, JJJ is upset because he has to pay for all the damage his Spider-Slayer caused, and on top of that, The Daily Globe is calling him a vigilante. Which is hilarious, and really should get more time. JJJ being rightly called the thing he’s crusaded against all these years is a fun angle that deserves more than an off-hand mention. Marla offers to try again with the Spider-Slayer, but JJJ says no, he’s got an ace in the hole he’s planning to use now. Meanwhile-meanwhile, Harry Osborn is finishing up with his therapist, Dr. Barton Hamilton, and Liza has arrived to pick him up. Hamilton thinks a woman like Liz is just what the doctor ordered for Harry. Probably right on that count. Certainly the best thing that ever happened to him. But now it’s time for the main event.

That… didn’t amount to much! Did JJJ really buy it instantly like that? Is he still harboring suspicions? Don’t know, but I don’t think he is. Peter’s so happy he gets in his Spidey gears and goes zipping around town in celebration, saying he still doesn’t know who sent JJJ those photos, but he’ll figure it out some other time. A random panel of people react to him flipping around, all obviously drawings of real people, Stan Lee and 2 kids who apparently won a Spider-Man Dance Contest on a Saturday morning cartoon show, according to the letter page. Sure!. As Sipdey takes a break from cartwheels and backflips, he notices 3 guys in hats and coats going into a condemned building, and decides to investigate. He nabs one of them off the street and reveals the colorful costume of a super villain goon beneath the trenchcoat. After some light threats, the villain agrees to tell Spidey what he and his cohorts are up to.

Spidey takes down another goon brandishing a pick axe, but then still another turns their laser cannon on him, and he’s got to do some serious dodging. He eventually lands on the cannon itself and takes out its operator, but the cannon shoots wild and caves in some of the roof. As he works to get the laser shut off, the goons regroup and try again.

Yes, Captain America foe Dr. Faustus is here, no doubt ready to do some real low rent Mysterio-type business. Not his first appearance in these pages, probably not the last. We’ll see about that next issue. This issue features a letter from one Frank Miller!

His letter praising Andru’s work on a conversation scene makes sense because it’s where Andru’s strengths are. He could do really good stuff with regular people. It’s our hero in action he seemed to struggle with.