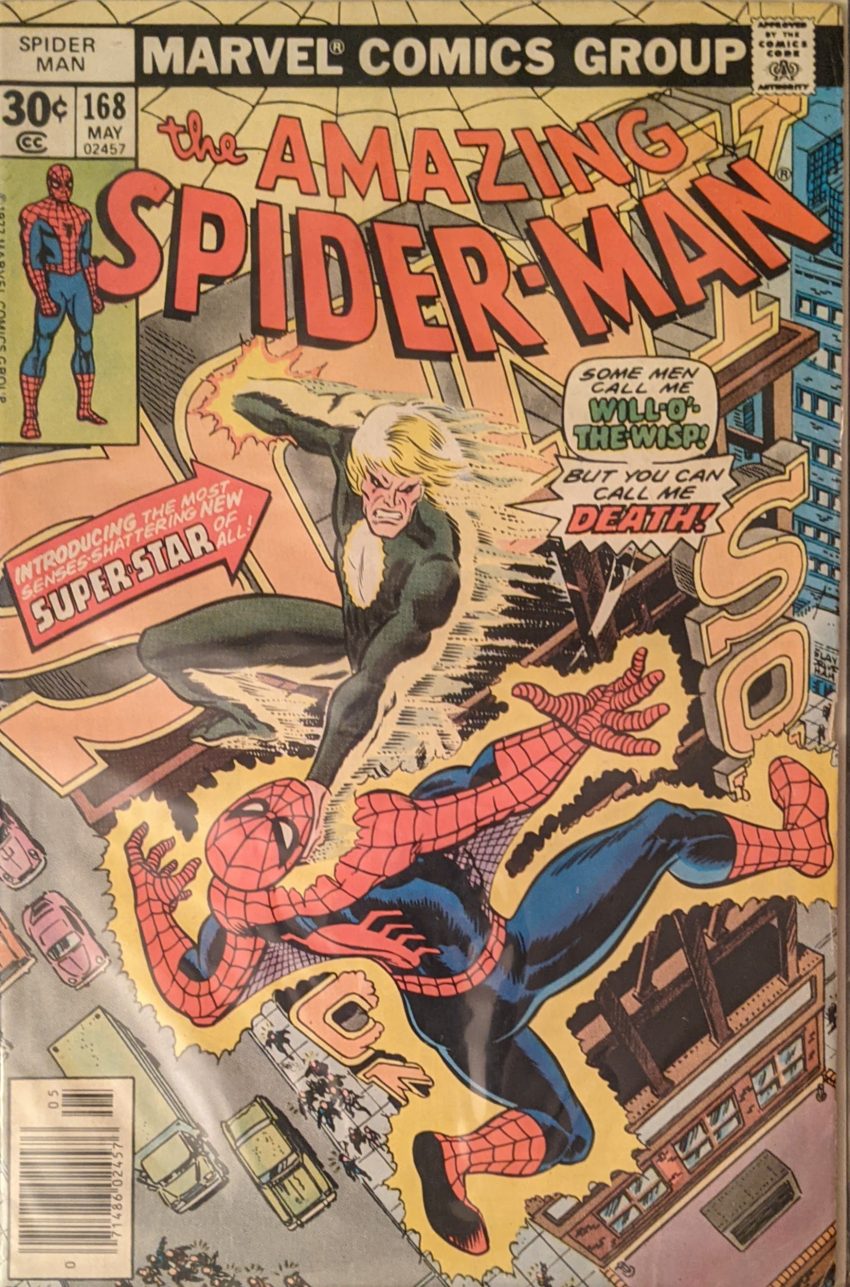 Weird that this is the 2nd cover in a row introducing Will O’ The Wisp. Maybe they thought the more mysterious previous version wasn’t enough. So, JJJ’s latest Spider-Slayer and Will are arguing about who gets to beat up Spider-Man.

Most of his life??? Even if this comic took place in real time, it’s been 15 years! Come on, JJJ. Man that’s an awkward panel at the bottom. As Will and JJJ fall all over each other, Spidey tosses his envelope of evidence up onto the nearby statue to keep it out of the fray. But then, Will starts having some kind of headache and yelling “too soon!”  before vanishing. This leaves a 1-on-1 fight as Spider-Man and the robot go crashing into a restaurant in an uncharacteristically confusing series of panels by Andru. JJJ shoots out an oil slick under Spidey’s feet like this is a Looney Tunes cartoon.

The famous Rockefeller Prometheus statue falls on JJJ, and Spidey grabs his envelope and swings away. JJJ is furious back in Marla’s lab. In a strange moment of clarity, he’s upset about how much it will cost him to repair the damage. I’m surprised he’s even taking responsibility for it. And if he does, doesn’t that open him up to all sorts of questions? Marla actually encourages him to try again. These 2 were made for each other.

EIGHTEEN issues later, the clone debacle continues to be a lingering plot point. Unbelievable. Meanwhile, Will O’ The Wisp zaps back to the man pulling his strings, mad scientist Jonas Harrow, not seen in ASM since 126. He rants that Spider-Man defeated his greatest creations, Hammerhead and The Kangaroo. Did Kangaroo being Harrow’s guy get revealed at the time? I don’t remember it. Harrow says this is too much, and commands Will to kill Spider-Man. He’s got some kind of remote control that will allegedly destroy Will if he refuses, which is why he’s been on his crime spree in the first place, so Will has no choice.

After all the not-terribly-convincing drama Wein has injected into Pete & MJ’s relationship, that’s a nice moment for them. Much later, Spider-Man plants the envelope back in JJJ’s desk. But as he swings for home, he’s attacked by Will O’ The Wisp. Their fight begins in a pretty unique run around and through some billboards before heading out into Times Square.

Harrow is in the crowd that’s formed below, and seeing him, Will feels has no choice but to continue. But Spider-Man tackles him while he’s distracted, finally gaining the upper hand, but then Will vanishes and reappears some distance away. He hypnotizes some regular people into attacking Spidey and heads up to the rooftops. As Spider-Man pursues, he admits that was too far, and suggests they take their fight where no innocents will be harmed.

Feel like there’s an alternate ending here where they fake Spider-Man’s death and then team up to defeat Harrow next issue, but I guess Len was ready to be done. And move on to his big showdown with JJJ over the envelope. But before we get to that, there’s some Team-Ups to check out.