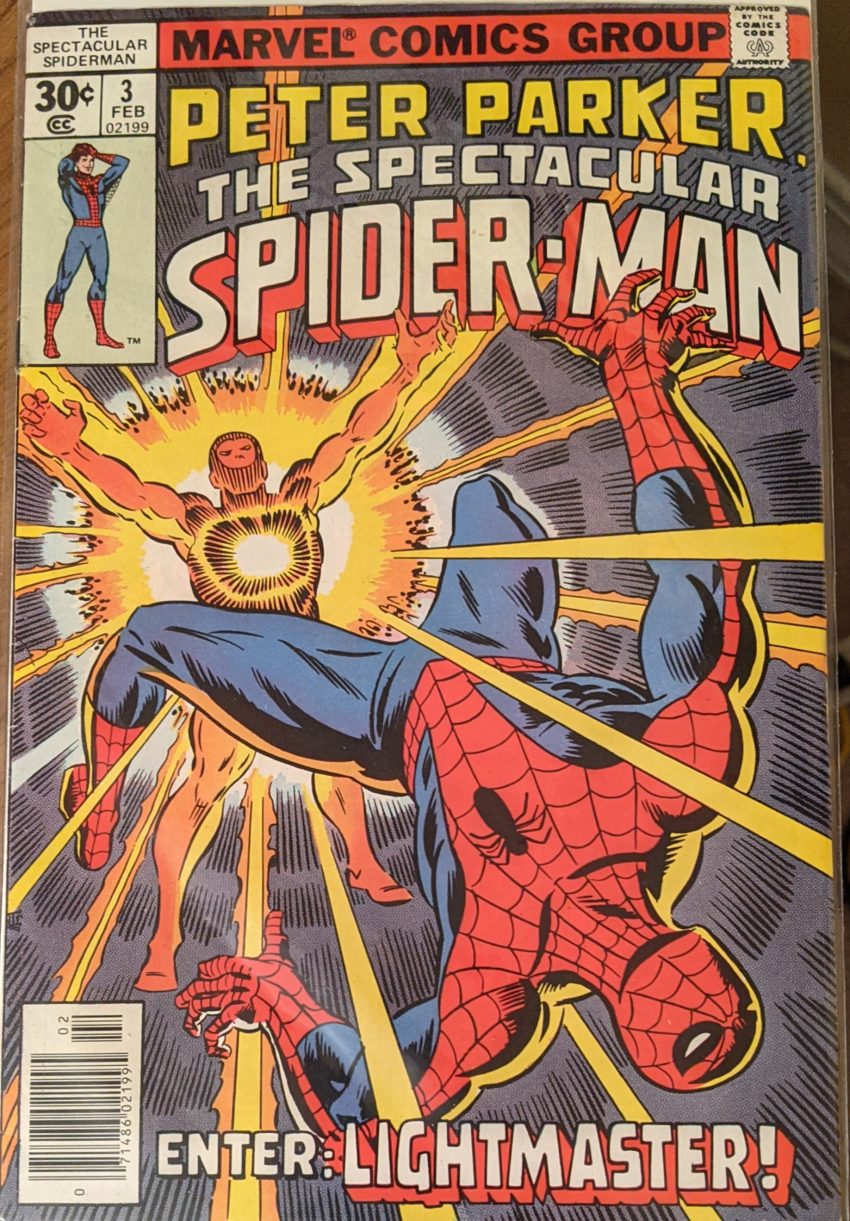 Lightmaster. Have we seen Lightmaster? I read his 2nd appearance and even his 3rd real early in this Spider-Man journey, but that was before I’d decided how to break up the posts, and I’m seeing this for the first time. Jim Shooter, still a few years out from righting the Marvel ship as Editor-in-Chief, takes over with a Gerry Conway plot and Conway mysteriously vanishes as quickly as he appeared. Why? Who knows? I usually have some background or other, but I got no intel on this. A seemingly abrupt exit from Marvel to DC only to return to Marvel in about a year and a half and then take right back off. Maybe this is when he started getting gigs in the TV biz. At any rate, Lightmaster. Oh, also, Sal and Mike are credited as penciler & inker, nothing more complicated, so I assume Sal’s back to full pencils.

Spider-Man don’t want none of your xenophobia, dumb dumbs. “Arch” is a very sideways reference to beloved editor Archie Goodwin, who worked on this very title. He even signs a footnote “Arch” later. The old man, called Mr. Yuschek by his Spidey-hating neighbor who runs up, is grateful, but Spider-Man misinterprets his reaction as fear and swings away feeling disgruntled. He says he’s spent all day looking for Kraven, Tarantula & their kidnapping victims and come up empty. He says stuff like that all the time. How’s he looking for them? Just peeking in windows? A lot of windows in Manhattan. But it turns out that wouldn’t have worked.

I have a lot of questions. Maybe some of them will even be answered. Lightmaster almost feels like a good villain design, but not quite. That mask is odd, for one thing. Anyway, Spidey heads home only to find Flash & Glory in his apartment! He thinks he keeps forgetting to lock the door when he leaves, which is pretty goofy. They think he’s asleep, and are playing records to try to wake him up, so he gets into a robe and plays along. Flash says he came by to see him, but when the door was opened, he and Glory decided to play music to wake him up. Flash offers to buy everyone dinner, and Peter changes and they take off. But when they reach the restaurant, Flash is startled by the incredibly coincidental appearance of one of the servers: Sha-Shan.

Flash hasn’t seen Sha-Shan since way back in ASM 109, and clearly hasn’t forgotten their preposterous history together. You might think Peter is rushing off to try to comfort his friend, but of course not, he saw a strange light in the window of city hall, and after the attempt on the mayor, he’s decided to go check it out. Inside, he finds Lightmaster ranting at the beaten City Controller Goldin about faking a financial crisis.

It’s not uncommon in 70s comics for spidey to just get the crap beat out of him, and leave you wondering why his Spider Sense didn’t warn him. It’s nice when a good reason for his whuppin’ is supplied. He snags a ledge to avoiding falling to his doom, and looks up in time to see Lightmaster escaping with his prey. He tries to get a tracer on him, but it doesn’t stick. Still dazed, he climbs up on the ledge to get it together, as a mob of New Yorkers yells at him to jump. Hard to be Spider-Man sometimes. The next morning, a sunglasses-wearing Peter goes where he always goes for clues, Joe Robertson. He says he’s taken an interest in these kidnappings and asks how a reporter investigates things like this. Robbie takes him to look at the files The Bugle has on all the principles, and is incredulous when Peter thinks he has all he needs after a glance at a single one. Later that evening, Spider-Man is swinging toward the townhouse we saw Kraven enter last issue.

It had begun to seem like the first victim wasn’t a victim at all, but the reasoning was impossible to guess. He’s kidnapping and killing people to get more funding to the university? Uh… ok… LM blasts a hole in the wall which Spidey ducks out, luring LM into an environment he’s more comfortable in. They battle through the air, Spider-Man guessing more details of LM’s ludicrous plan to… get rid of everyone in his way and then use his powers to get the school some money…?… what?… as they go. Lightmaster confirms Spidey has guessed the whole thing, and no one ever gets around to explaining how in the world he has “solid light powers.”

The way Spider-Man talks about Peter Parker like a separate person sure is odd, but we’ve made it to the end. Lightmaster. Weird, weird deal. In the letter column, it’s mentioned that Len Wein has met with incoming TAC writer Archie Goodwin and incoming MTU writer Chris Claremont to hash out their stories for “the next several months” to ensure continuity. Unfortunately for them, Archie won’t last long on the title, either, and then Bill Mantlo will be here, doing his 6- and 8- part stories that make it really hard to fit all the books together. But that’s for later.