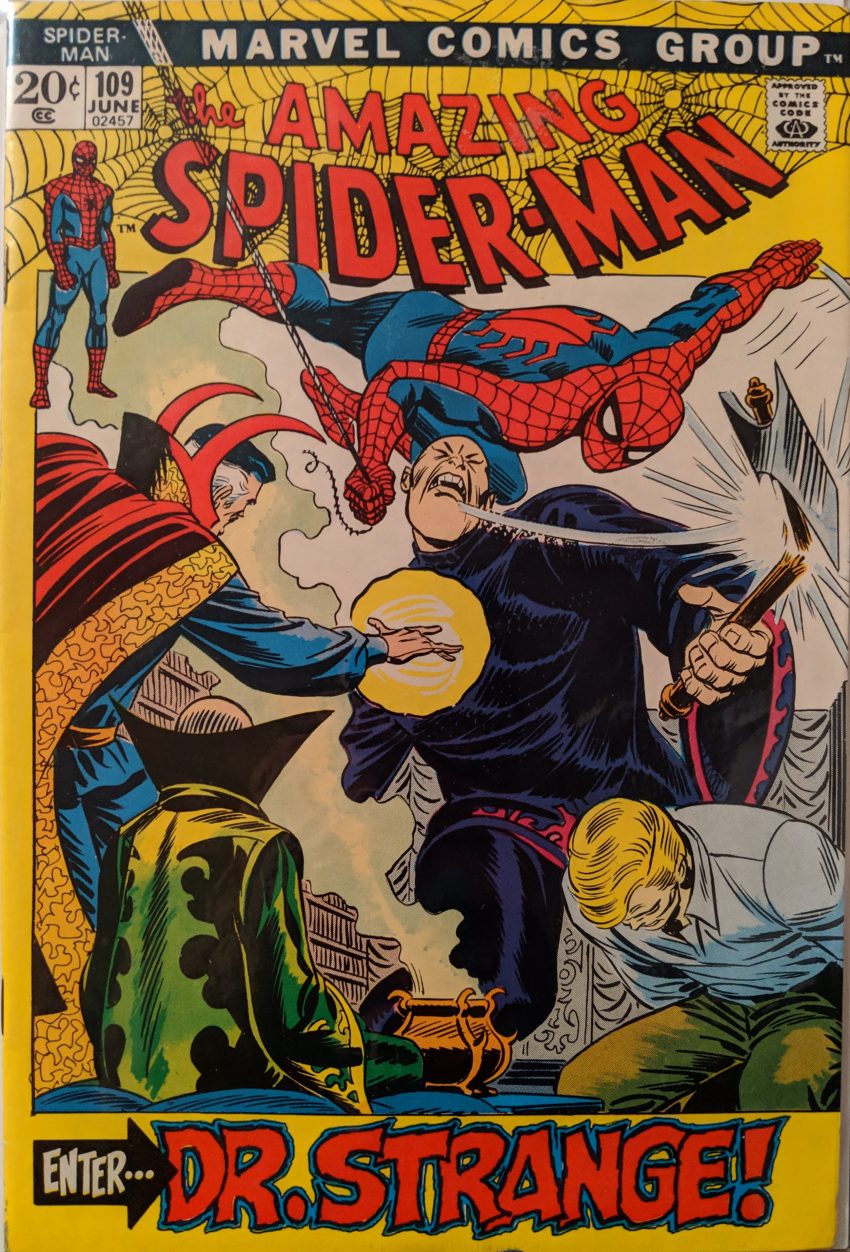 We drop right back in where we left off last issue, Pete & Gwen still in the bombed out ruins of the federal building. Pete can’t leave without disappointing Gwen, but he’s got to go save Flash. Peter ducks into the bathroom to get some room to think, and hits upon an idea:

Hilarious. But, hey, whatever works. Spidey drops the clothed webs and starts swinging around trying to get a ping from his spider tracer. But as he gets closer to Greenwich Village, his Spidey Sense starts going crazy, even though no one he’s looking for is in sight. Hey, who lives in Greenwich Village…?

Dr. Strange was using a spell to make Spidey hone in on him (Sure, ok), and keeps using it to guide him back to his Sanctum Sanctorum. Once there, Strange shows Spidey a vision of the people he’s after, and wont let him go, not yet. As Strange & Spidey watch through the spell, Flash is brought before what he thinks is some kind of idol, but it’s not. It’s the old monk who helped Flash in Vietnam. But he’s in some kind of trance.

Well, that’s not very helpful, Sha Shan. They take Flash to a cell to wait for the right time to kill him, and the vision fades. Spidey makes the sound point that he doesn’t know why Strange is into all this, but he needs to get over there.

Shout out to the Seven Rings of Raggadorr. As our heroes rush to the rescue, we check back in with Flash, sitting in a dark room, feeling understandably distraught, thinking about how maybe someone does deserve to die for what the war put the Vietnamese through (Wow, Stan, that’s pretty radical for the time!). And then Sha Shan sneaks in, motioning for silence. She’s on his side, of course, but couldn’t do anything to stop the others’ thirst for vengeance. She also reveals she’s the one who lead Flash back to camp after the explosion, when he was in a daze. But then she pulls a knife out right as the priest discover her in Flash’s cell, and they drag her out saying she’ll ruin the ritual. Meanwhile, Gwen Stacy has made it to Peter & Harry’s apartment, hoping to find him there. But he’s not, so he must still be in the clutches of that evil Spider-Man.

Gwen snapped! Harsh truths everywhere! As Aunt May is rethinking the way she treats Peter, we jump back to Flash’s predicament, as it’s The Holy Hour now. But, naturally, just as a big axe is given to The Giant One to kill Flash… well, you can guess…

SATAN… ish. Spidey frees Flash, but The Giant One gets a hold of Spidey in the process, so it’s fightin’ time. Spidey is able to put in a better showing than last time, and after some acrobatics, he seems to be winning. Strange tells him he’s got to keep them at bay a little longer while he weaves his spell.

As Strange finishes breaking the trance, Flash has run off and found Sha Shan, now locked away herself. She says she was only trying to cut his ropes with the knife earlier, naturally, and then her father, back to normal thanks to Strange, calls out for her. So, the day is saved.

Ouch. So, Peter is left wondering if his love life is in trouble, Gwen is still wondering if Peter’s alive or dead, and Aunt May’s had her whole worldview thrown off. Maybe not the happiest ending, after all. The “white dude making stuff up about an Asian culture” of it all got a lot weirder this issue. But… I’ve seen worse, sadly.