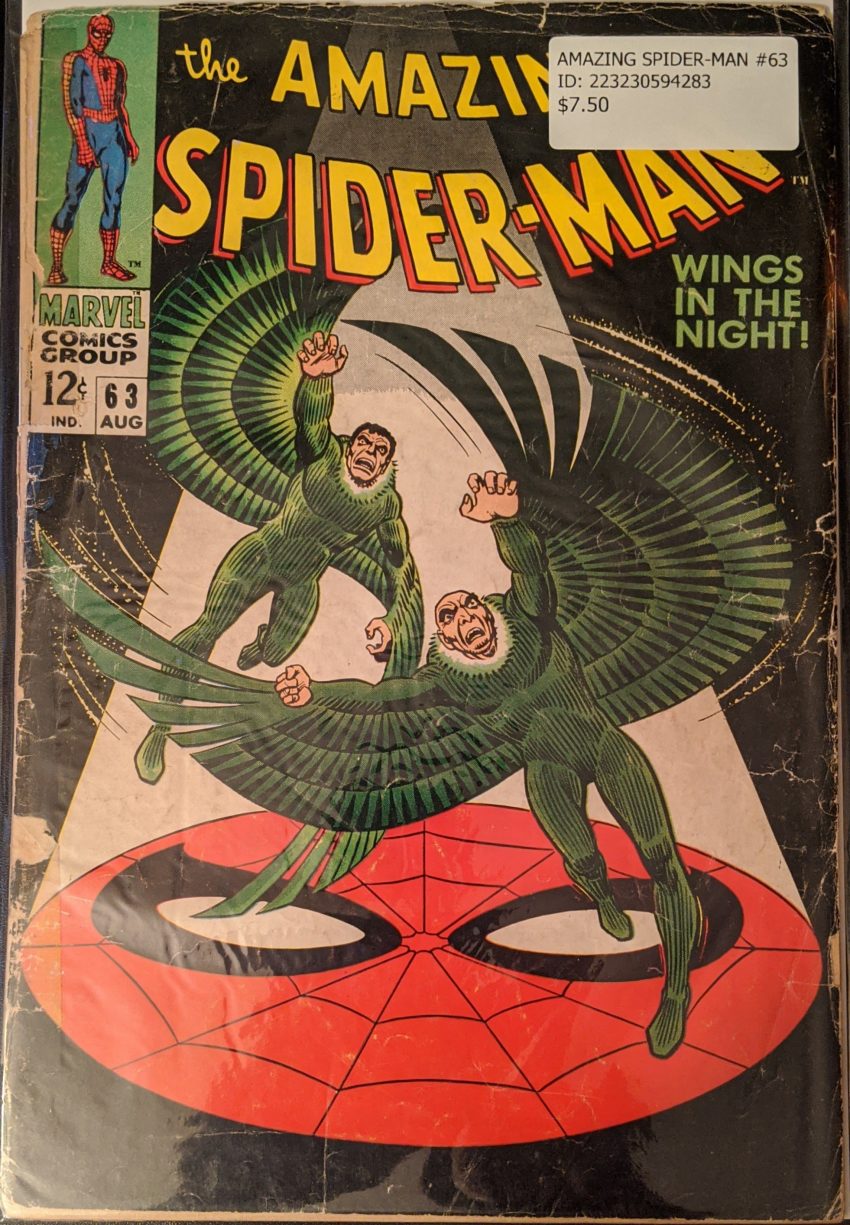 Welcome back to 1968! Feels like it’s been forever since I saw stuff this old. There’s so much stuff from the Michelinie era. Anyway, this is gonna be a nice, long stretch from the classic period, starting with a story of too many Vultures! We are back to the era where Don Heck is penciling the book over John Romita’s layouts and getting almost no credit for it.

“Abetting” apparently means “doing most of the line art” now. Stan Lee and credit was always a problem, and Don Heck wasn’t the marquee name John Romita was, so… Just fudge it, right? Also Mike Esposito is still on inks under his 60s alias Mickey Demeo. As for this whole “too many Vultures” situation, Vultch brings us up to speed…

The rain is so bad Spidey’s web won’t stick to anything and he can’t see where he’s going. He falls out of the sky and bounces off a few buildings before landing in a heap on a roof. Not his best day. As he drags himself back to his place, The Vulture arrives at a museum that’s displaying the wingsuit worn by Blackie Drago, and breaks in to steal it, saying no one else deserves to have his wings. Wonder how Drago’s gonna get back in the suit at this rate.

Still bad times between Peter & Gwen since her dad was brainwashed into committing crimes and he took pictures of it. As they plod through their school day, both Peter & Gwen are lost in their thoughts about each other, unable to talk it out. The drama! Meanwhile, the prison Blackie Drago is in is attacked by The Vulture, still carrying his spare wingsuit. Vulture demands Drago put the other wingsuit on, but Drago is acting like a real dumby, saying The Vulture is dead and refusing to believe his eyes. But, as the real Vulture beats up prison guards, Drago does as he says.

This is a weird way for The Vulture to show how much he hates Drago after spending this whole issue talking about it. Good prediction there, Harry!

Uh-oh. Norman’s coming dangerously close to remembering the truth. They get Norman to sit down and relax. He slowly stops freaking out, and Harry says he’ll take his dad home and stay with him ‘til he feels better. Elsewhere, the 2 Vultures have made it back to the city, and land on a roof to talk. First, Adrian explains that, even though he seemed to be dying in prison, when he found out Drago had doublecrossed him, his desire for revenge gave him renewed strength. He started a fire in the hospital the same night Drago escaped and fled in the confusion dressed like a guard. Their argument also recaps how Drago & Kraven got in each other’s way and led to Spider-Man beating them in ASM 49.

As the Vultures battle it out in the sky, they draw a lot of attention on the ground, and soon Peter Parker sees them on his way to The Daily Bugle. This is where Spider-Man leaps into action, right?

Well, he’s in a situation now, and it only gets worse as The Vultures crash into a nearby building as a little kid is playing on his terrace, and soon is hanging onto the wreckage for dear life. So, suddenly, Peter vanishes on JJJ. The Vultures just keep wailing on each other for another page as the kid hangs off the building.

This issue was a real crash course in classic Spider-Man stories. Checked in with all the supporting characters, got some relationship drama in there, and still left plenty of room for fight scenes. In the letters, there’s a missive from Don McGregor, future Marvel writer who, among other things, fleshed out the world of Black Panther in the 70s, creating characters like Erik Killmonger. Interestingly, it’s Don’s opinion that Spider-Man is the only Marvel title left where the art doesn’t overshadow the stories. He means this as a compliment to Stan, but as he name checks how amazing Jack Kirby, Gene Colan and Jim Steranko are, it feels more like an insult to the ASM art team. Anyway. Next issue, we’ll see how a one-armed Spider-Man deals with The Vulture(s).