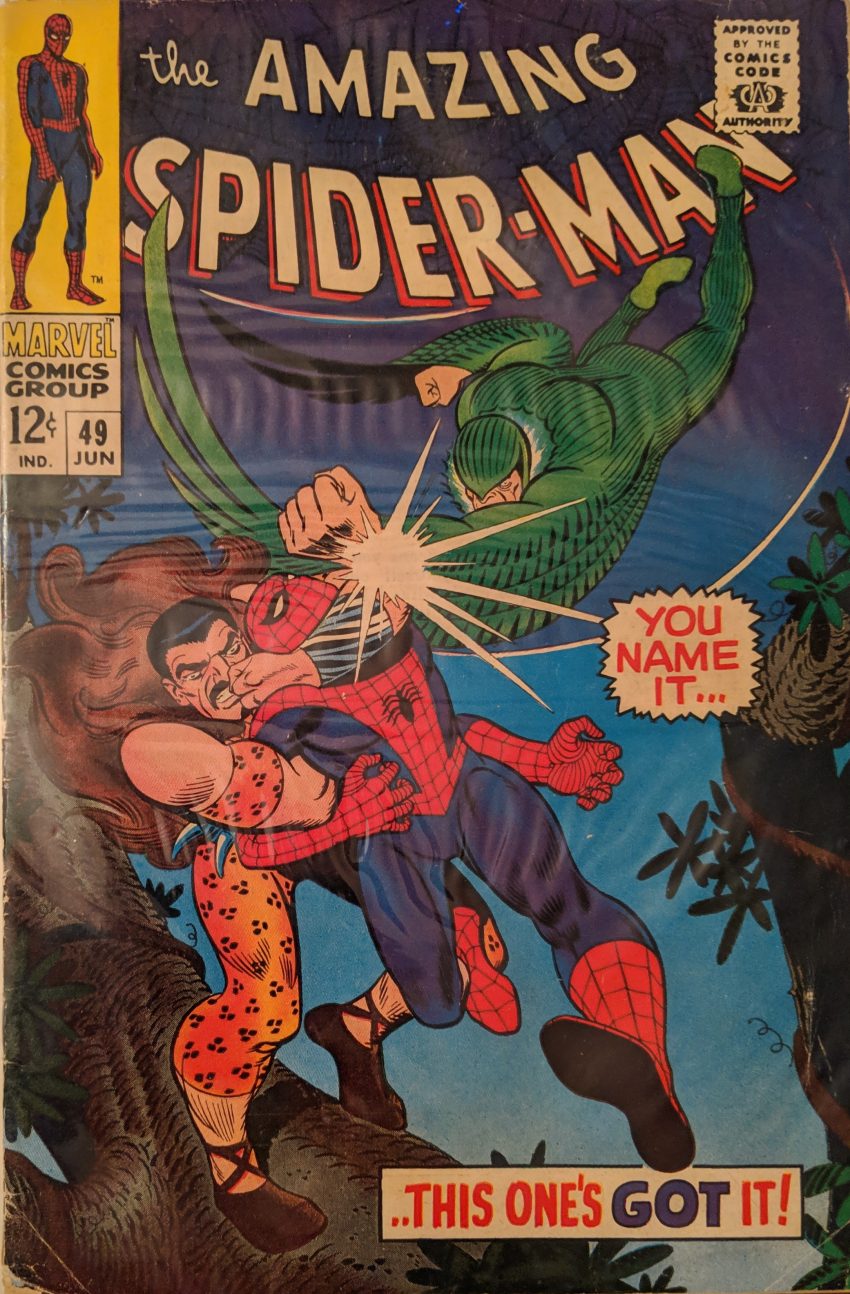 Cool that this one has everything you can name in it. That’s good value for your 12 cents. We pick up where we left off, our man passed out in the snow, his life flashing before his eyes if we can believe Stan’s caption, this is it! Until it’s not.

“Spider-Man is dying!… oh, wait, he’s not, sorry.” He is pretty messed up, though, as he carefully lowers himself down a ladder to the ground. He can’t even swing home, he just stumbles through alleyways trying to hide in shadow until he can finally crawl in his bedroom window, hoping he won’t alert his roommate…

Kraven, you’re only slightly more intimidating that Stilt-Man, take it down a notch. He gets so mad that anyone is considered scarier than him (I mean, is that comparison even being made? Doesn’t seem like anyone’s news story would be like “This crime spree is even worse than that time Kraven threw a net at Spider-Man!”) that he has no choice but to go fight his pet tiger, Rajah.

I read this absolutely insane interview with Mike Tyson one time where he said he liked to punch his pet tigers to “keep them mean.” Kraven the Hunter and Mike Tyson: Two sides of the same coin! Now that he’s done beating up his friend, Kraven heads out to hunt The Vulture for a change. While he’s off to bother another animal-themed person, Aunt May & Aunt Anna drop in to check on Peter.

The Dr. Bromwell must be the only doctor in New York. He serves billionaire Osborns and barely-scraping-by Parkers with equal vigor. Peter takes the chance to get out of his Spider-suit while everyone’s in the other room, and is surprised to note he actually feels pretty good after a night’s sleep. But now he’s got to hang around so he doesn’t make anyone suspicious. And while he’s occupied, The New Vulture is on the rampage again, attacking a helicopter, quite proud to be committing “the world’s first act of air piracy!” as he batters the vehicle until they give him the case full of diamonds it’s transporting. He flies off, drunk with power, but Kraven was nearby and says he’s got his scent now. Seems like a negative to me. A typically enraged JJJ has Betty call Peter’s place wanting Vulture photos, but Harry tells her Peter is sick. And then Gwen & MJ show up, Gwen debuting her trademark headband.

The cool young people dialogue in this stuff is so aggressive. I kinda love it. I also kinda doubt any human being ever talked like this, but I kinda love it. We see, like, subsequently, that The Vulture is still out causing chaos when a bolo catches his leg.

Haha. Right in the face. I apparently dislike Kraven the Hunter so much I’m rooting for The Vulture’s Temp. Kraven grabs him as he flies by, super excited to be fighting someone so sure he can’t beat them, and they eventually crash through the skylight of a nearby building, Kraven preposterously says was his plan all along. Back at his place, Peter hears a news bulletin about them fighting, and peeks out to find The Aunts both napping in the living room, so he takes the chance to leap into action, not even feeling sick anymore.

Spidey up there clapping for them is perfectly obnoxious. Vulture suggests maybe that some other guy in a Spider-Man suit rather than admit he didn’t kill Spider-Man, and then it becomes a bizarre 3-way fight, everyone trying to beat everyone else at the same time, the villains bickering the whole time.

Kraven’s got him dead to rights, but then The Vulture swoops in to try to finish Spidey off, and Kraven isn’t having that, so our hero is able to break loose in the confusion. Vulture proposes a truce, but Kraven’s kind of insane right now and doesn’t acknowledge him. He does accidentally hit him with his his goofy chest zaps from ASM 47 as Spidey dodges them, though. That brings it down to 1-v-1, and Spidey leaps onto Kraven, ripping out the silly ray stuff from his vest.

Spidey webs up the villains and grabs a few post-fight pix before heading home and diving back int obed right as Dr. Bromwell is arriving, no one ever knowing he snuck out.

When will the pusscat/pusswillow saga end?