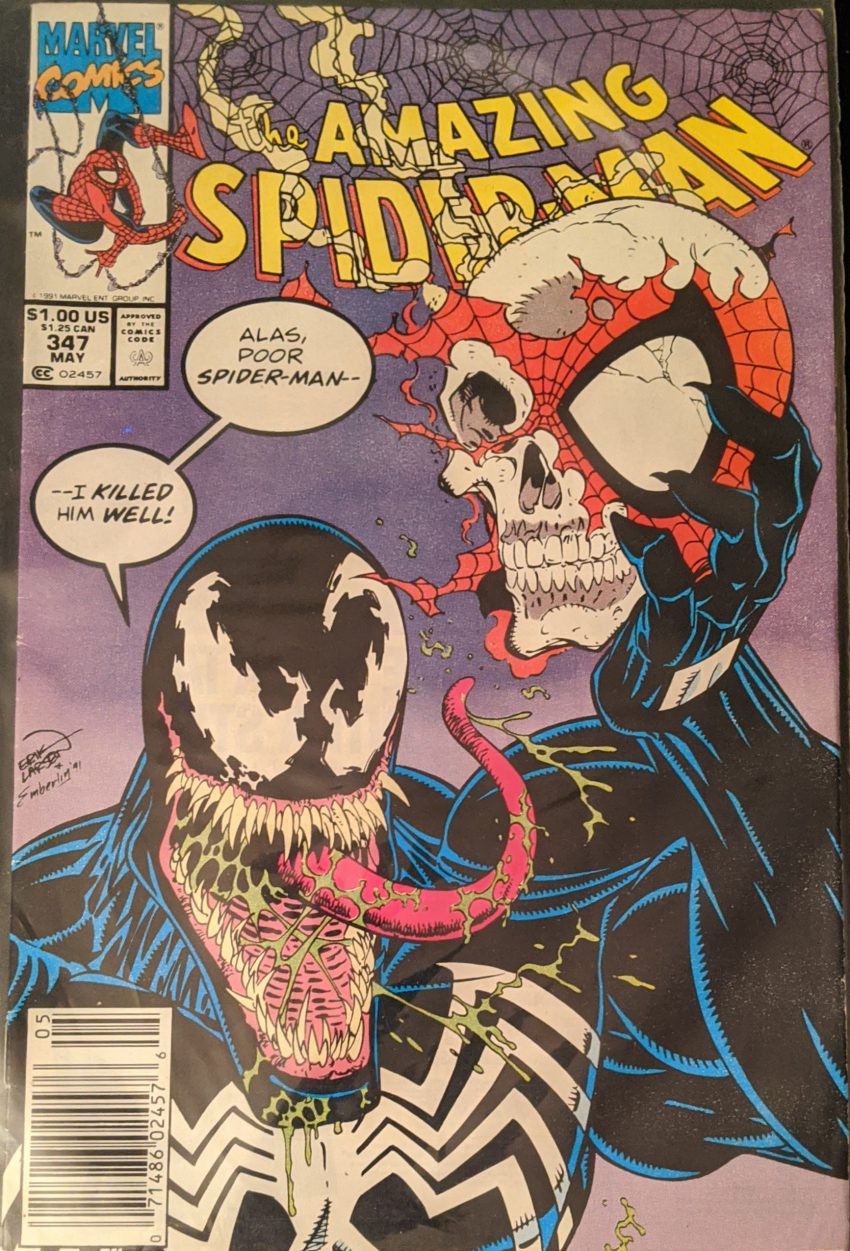 This is a famous cover. And it sucks. Beyond the obvious, what is wrong with Venom’s shoulder? Why is Spider-Man’s skull significantly bigger than Venom’s? Did he turn back into Spider-Hulk before he died? Venom’s eyes are very different sizes. And, of course, the modified quote doesn’t actually make any sense. Ah, well. Time to see what this is all about. Spider-Man wakes up on a beach, very confused. He asks no one in particular where he is, and Venom tells him he’s in paradise, a great place to die.

Spidey confirms, for the record, that when Venom talks, that ridiculous maw Larsen has given him does, indeed, move. Imagine how incredibly silly that would look.

Really only posted this page because that Spidey got reused a lot. Spidey runs for it while recapping Venom’s deal (Would sure be weird if this was where you came in). He stops to drink out of a pond and Venom, camouflaged to look like the water, yanks him in. How’d he get there? Does he teleport like Jason Vorhees now? Meanwhile, in Pittsburgh, MJ is staying with her sister and the kids, feeling frustrated that anything could be happening to Peter and she wouldn’t know. But she’s trying to tough it out for him. Back on the island, Venom is beating up Peter under the water until he finds a stick.

Well, that makes very little sense, but ok. Our man runs off to the abandoned mining town Venom helpfully referenced earlier and tries to set some traps. Then, trying to figure out how ot lure Venom into them, his foe appears behind him, disguised to blend into the trees. This is really turning into The Predator.

Peter pulls a door off a building and smashes it into Venom’s head, but get’s a faceful of webbing for his trouble. He tries to swing away, and Venom throws a whole truck at him. It gets so close that he’s shocked off his webline, and he and the truck fall down into the abandoned mine, which he quickly learns is full of gas. He realizes it could explode if things get crazy right as Venom catches up to him. We cut away to New York, where Felicia is snapping at Flash because she’s worried about Peter.

Good for her. Her actually liking Flash seemed an unlikely ending for her revenge plot when it was first introduced, but it’s nice.

Venom sends the alien under the sand like he did in ASM 317, and then battle is back on. Peter manages to catch him off guard and kick him into the jungle before fleeing in the other direction as the sun begins to set. A brief cutaway to May having a feeling she should worry about Peter while she and Willie watch In Living Color is pretty funny, and then we’re back to the island. Peter is walking through the graveyard Venom also helpfully mentioned earlier, and accidentally steps in a shallow grave, seeing a bunch of bones and freaking himself out before seeing a light in the distance.

Peter books it into the woods with that log. Venom assumes he thinks he can use the fire against the symbiote and goes charging after. Running past an old Van, Peter webs the trees in front of him, expecting Venom to plow into it in the dark, which he does.

The thick drool of satisfaction…

Venom reverting to a more reasonable mouth in that panel always stuck out to me. Like Larsen posited the crazier he was, the crazier he looked, and vice versa. Peter’s plan here was, frankly, ridiculous, and I can’t believe it worked. But he was right: All Venom wanted to do was kill him, so give him a body, and that’s that. The final Venom story. Again. Sure, the symbiote has “died” twice already and still come back, but I’m sure this is truly the end. All those comics on this blog that take place later with Venom in them must be some other Venom. In 1990 and now, I would’ve been totally fine with this being the last Venom story, but he was way too popular. Not too very long from here, Marvel will instead double down on Venom madness and introduce Carnage. But… that’s a ways off.