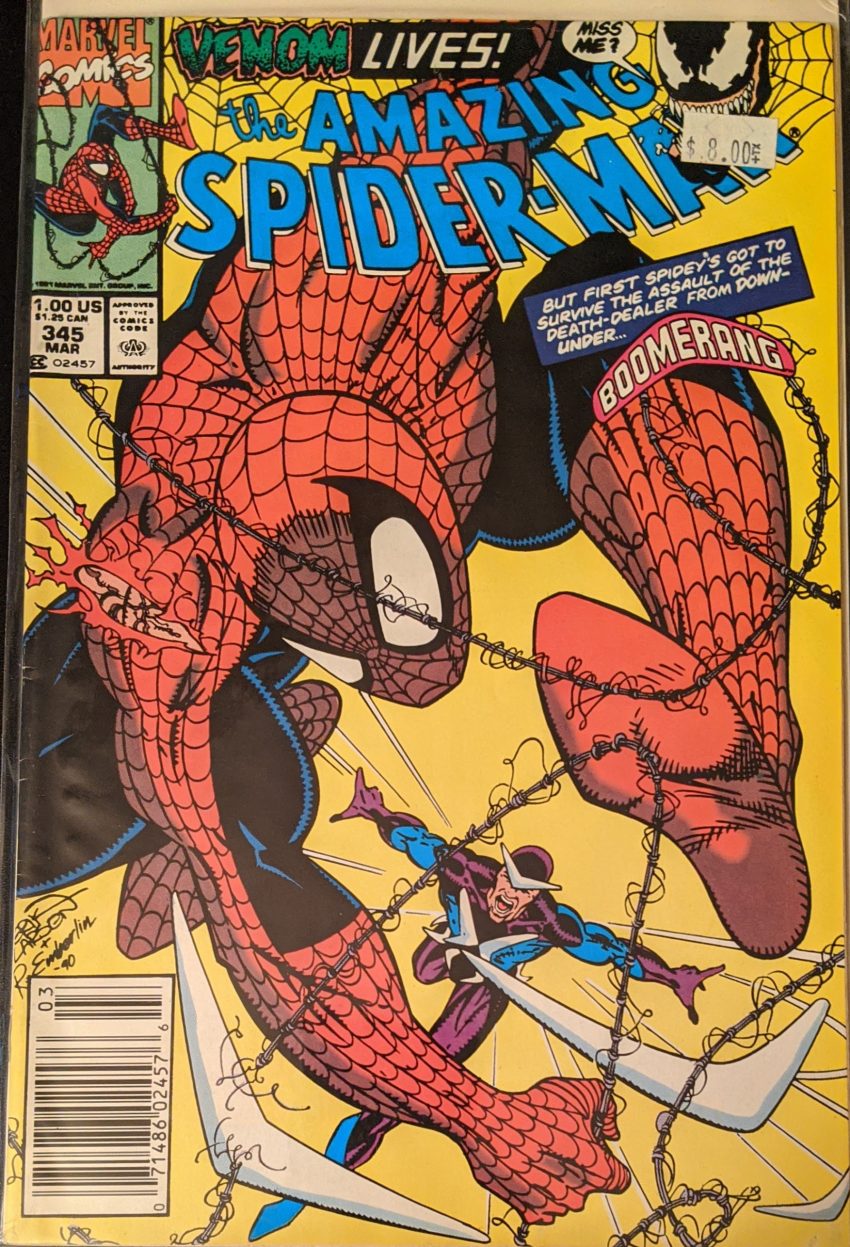 $8.00!!! Surely not. Really? $8.00? That seems crazy high. Well, huh. Looks like a VF copy is more than that on mycomicshop.com. I do recall not getting this one when it came out. I missed comics a lot in this time. I don’t think I had a pull list at a comic shop until later. I was relying on trips to pharmacies, grocery stores and gas stations, all places you can’t actually get comics anymore, which is sad, I guess. Not like a kid could ever afford a comic book anymore, or would pay for one if they could. “Hey, kid, you wanna spend $5 on 20 pages of story?” “What? That sounds stupid.” “You’re right! But some of us are completely brainwashed by a lifetime of buying these things, so even though the prices on them are literally insane now, we just keep buying them!” “That’s really sad!” “It really is!” “Ok, mister, see ya later!”

I may have gotten off track. Behind this sort of off-model cover where Larsen has drawn Spidey looking a lot more buff than he usually does is a fill-in by none other than Mark Bagley. I believe this is his debut on the title, and not far from the beginning of his very long tenure as regular penciler. I haven’t been pointing them out often, but Michelinie’s pun titles have not slacked up at all, and some of them, like this issue’s “Gun from the Heart,” are a real stretch. The splash is Cardiac shooting his stick at us.

He owns a whole hospital? That seems unusual. Are there a lot of hospitals with, like, a landlord? As Cardiac flees the scene, Spider-Man is swinging around looking for him and recapping last issue.

Bagley’s art bears more than a passing resemblance to Larsen’s. As a kid, I thought Bags was clearly imitating him. But, while we’ve seen earlier art that looked a lot different (In, say, TAC Annual 8), he was already drawing more or less like this when launching New Warriors, which he’s still drawing some 8 months later, at this point (And will continue to well into his ASM run. Got Romita, Jr.-level work ethic, he does). It may be an actual coincidence. But as far as I was concerned as a kid, it was a swipe. At any rate, Peter & MJ are headed to lunch at May’s with Willie Lumpkin. May asks MJ to come serve with her so Peter can talk to Willie alone. Peter is obviously nervous, but Willie wants to make one thing clear: He’s heard about Ben and Nathan, and…

No memory of what happens to Mr. Lumpkin. Justin Hammer prepares to call in a new goon, and I bet you can guess which one. Two days later, Peter is at school when he sees a poster of Silver Sable telling Spider-Man to contact her. He knows how tenacious she can be about this stuff, so he decides he better get it over with.

Spidey thinks that he doesn’t trust that dude, but he’s already after Cardiac, so he might as well get paid. Speaking of, Elias Wirtham is watching news about this company he’s taken such an interest in.

Gosh, who could that be? We cut away to Ryker’s Island, where Cletus Kasady has just decided to kill Eddie Brock when some black goo comes pouring through the window.

Funny how these characters can be a little off at first “Sweet mother of God!” isn’t a very Cletus Kasady thing to say, but who would know that at this point? Well, Spider-Man has stowed away on a big boat used to lure Cardiac out, and his Spider Sense tells him something’s up, so they give the call to abandon ship. All the workers begin to do so except the one who is obviously Boomerang, who then reveals he is Boomerang. Cardiac is in the hold of the ship, about to blow it up when Spider-Man confronts him. It is, as always, fightin’ time.

As they do their thing, Boomerang thinks he was told to let them fight it out before making a move, but he wants to kill both of them, so he jumps in. Spidey dodges his boomerangs, as usual, but then…

Boomerang taken down in a record 2 pages. And he got the cover to this issue! He’s distracted Spidey long enough for Cardiac to blow a hole in the ship, tho.

Kinda feel like how the symbiote survived IS important, myself. But Michelinie never explained how it overcame turning to dust in Web #1, either. I dunno, man. Comics. Well, Venom’s back, and next issue, so is Larsen, so get ready for all the giant tongues and drool you could possibly want. Unless the amount you’re looking for is “none,” like I was (And am).