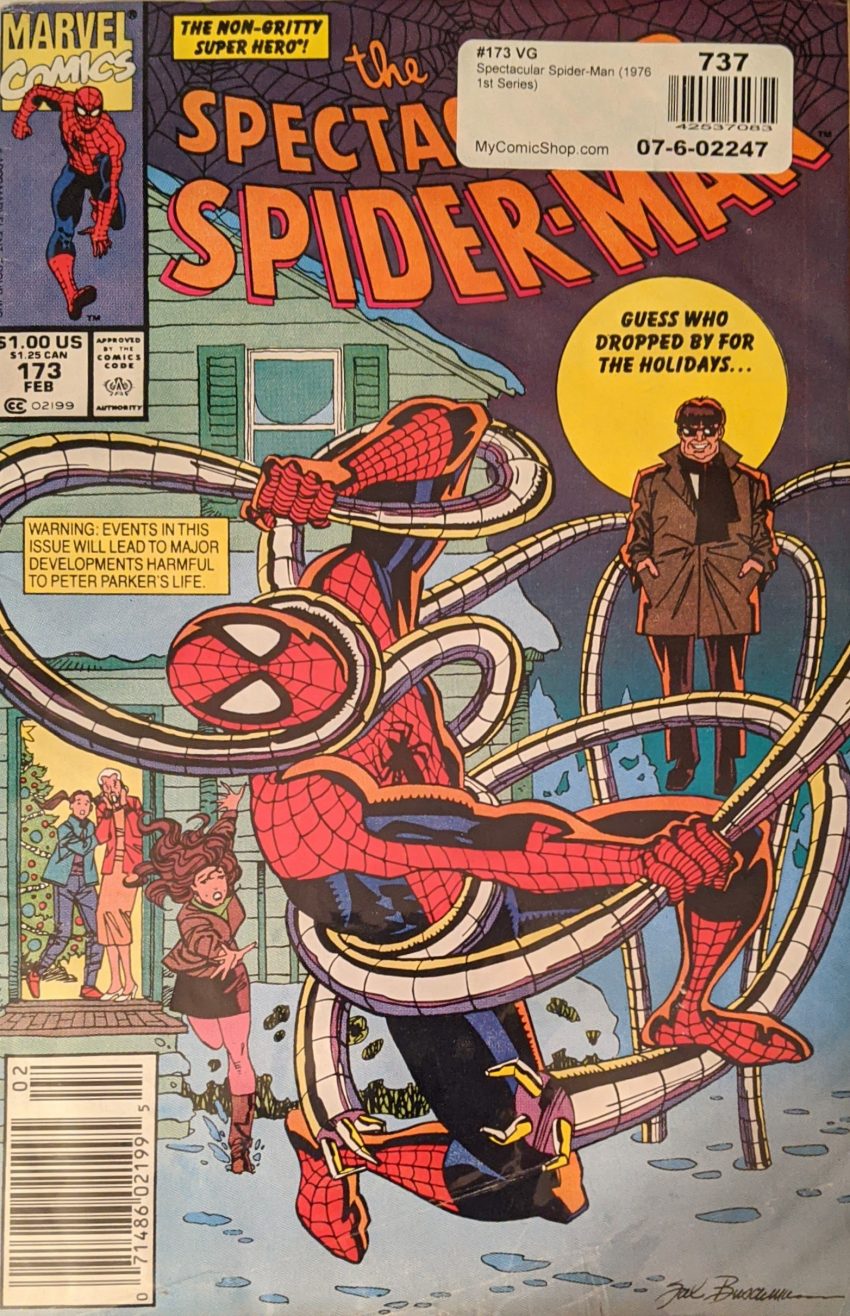 “The Non-Gritty Superhero!” Don’t tell Todd McFarlane… That surgeon general’s warning on the cover is a baffling choice. Here we begin what would’ve been Gerry Conway’s last TAC story, but he’s already gone. Each issue of this story features other people scripting over his plot. Two per issue, for some reason. This month, Gerry provides script for the first 5 pages, and then David Michelinie takes over. 3 goons are beating up a guy for his money on the docks on Christmas Eve in Jones Beach, Long Island with a preposterous contraption comes up out of the water.

“That looks like a machine out of War of The Worlds, let’s go hit it with our sticks!”

Others immediately picking up on Ock not wearing spandex anymore is so nice.

Bananas. So, first of all, in ASM 131, Conway seemed pretty certain Ock was just marrying Aunt May for her nuclear plant. There seemed to be no affection there. Len Wein was the one who established that, so it’s a bit odd to see Conway on board. But far more recently, in Parallel Lives, Ock tried to kill Peter Parker’s whole family, and that was written by… checks notes… Gerry Conway. Good luck explaining that when you arrive, Doc! It’s a lovely scene at Aunt May’s, with MJ, Kristy & Willie Lumpkin decorating her Christmas tree and MJ thinking some recapping about Kristy’s deal for us. Willie Lumkping is being as goofy as usual, making May laugh, and making MJ happy to hear her laugh again. But, as usual, Peter is missing from the family dynamic. He’s swinging his way there as Spider-Man with a bag full of presents when he sees some goons harassing a Salvation Army Santa. When he tries to intimate them, they point to a nearby Puma-commissioned Daily Bugle poster of Spidey hugging kittens and just make fun of him.

Nick Katzenberg, the rare character who can make you think “I’m glad this guy dies of cancer.” Nick yells to Spidey that he’s gonna sell this to JJJ as him harassing innocent kids on Christmas as he drives by. Spidey is irritated, but the Santa guy says even Santa gets no respect anymore, and our hero can’t argue with that. Nick stops by an informant, who gives him an address where a big meeting is happening. I’m sure that’ll come back to haunt us, but first…

Peter and JJJ give each other the exact same tie, which is pretty funny, and Pete gets Robbie a meerschaum, which is a kind of pipe, as it turns out. I guess Robbie’s kinda easy to shop for. For Betty, Peter has a crystal swan or something, but he’s interrupted in presenting it by Katzenberg’s arrival.

Wah wah. We immediately skip to Spidey swinging to Aunt May’s, which seems abrupt. He sees a limo parked outside, and then he sees Doc Ock peeking in the window like a weirdo. That’s not what you wanna see on Christmas Eve.

It’s time for Gerry Conway’s beloved, yet far less common, Hero And Villain variant of Fight Over A Misunderstanding.

They get down to it for awhile until, of course, the noise they’re making brings Aunt May outside. They drop it instantly, both of them feeling bad for messing up Christmas Eve. Ock agrees to just leave, and Spidey can’t help but think he seems a little sad.

What could Nick be up to? What will Ock do now that Spider-Man has ruined his Christmas? I don’t know, I’ve never read this. But we’ll find out together next time.