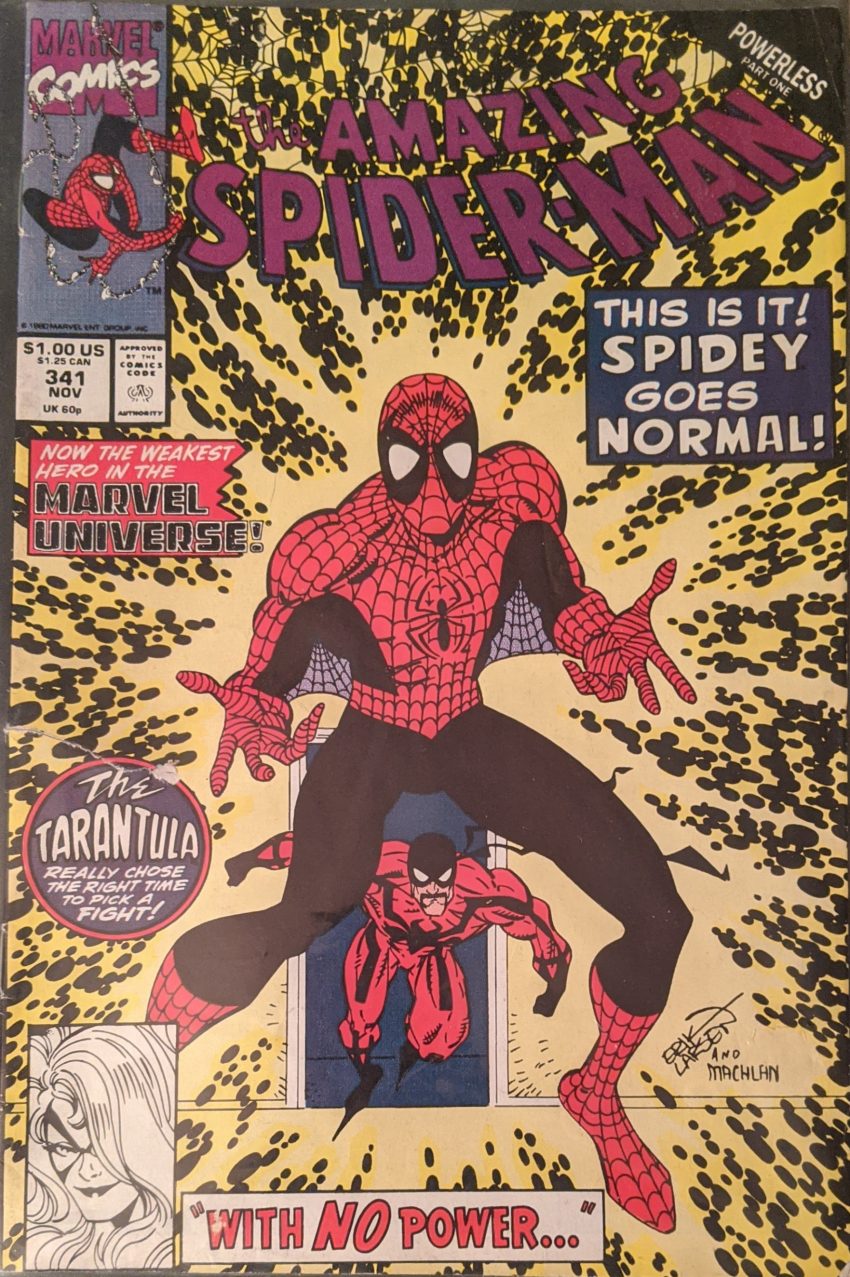 So this issue is the absolute most damaged comic I have from when I was a kid, and I really don’t remember why. It’s got a tear a few inches long through the entire book from the spine. I want to say I got it like that. Maybe someone traded it to me. I don’t know. Anyway, this is obviously a play on the “Spidey Goes Cosmic!” TAC 158 cover from awhile back, and they clearly had a lot of fun with it. Randy Emberlin inks this one solo. On the first page, Spider-Man is once again being bathed in the white light of that machine from last issue.

There’s a very Ditko-y quality to Larsen’s Spider-Man sometimes, and yet it never feels like an impression. It’s funny to me how the amount of webbing on his costume depends on how far away he is.  And Dr. Turner can’t POSSIBLY have a nefarious agenda here, no sir. Spidey recaps last issue on his way to the roof, saying with Nathan gone, he’s all May has left, and it’s not fair to her that he could die any day. Then he absentmindedly shoots a web and swings off the roof.

Pretty funny. Shades of ASM 200, too. Meanwhile, we learn Dr. Turner has a small gang of beautiful women at his beck and call, one of whom he demands to get him some grapes. And that he didn’t design that machine, but rather got it from The Tinkerer, and only thought it would incapacitate Spider-Man long enough to get rid of him, so he’s pleasantly surprised. Then La Tarantula, STILL living in that garbage barge (! What is the deal, man??) gets a call from the government stooge that set him against Spider-Man back in TAC 137. Man. We’re to believe Tarantula has been living in a trash boat for the last 3 years, our time. That’s hilarious. Anyway, South, the stooge, says he knows Tarantula has snuck back into the US, and that he knows Spider-Man has lost his powers, so now’s a good time for revenge. Then he gets mad at that girl when she brings him grapes, so it’s obviously The Chameleon. As a kid, this was one time I got it. I’d seen Chameleon by now and knew his deal. I didn’t know anything about the previous Tarantula story, or even that this guy isn’t the same Tarantula from ASM 148, but I had seen that issue, so I was comfortable with him, too. It was rare for me to not be learning as I go at this time. Elsewhere, Peter & MJ are walking up to their home, Peter saying he’s getting tired much more quickly now, when they find Flash Thompson & Felicia Hardy at the door wanting to go on a picnic.

Saying she was “more enamored” with Spider-Man than Peter is a very nice way of remembering her weird disdain for the man beneath the mask.

Believe it or not, that mailman is important.

Mm hm. Kind of hilarious, but May is smitten with a new man. Willie Lumpkin! Willie Lumpkin, believe it or not, is a character who’s been around almost as long as May herself. He has been The FF’s mailman since FF #11. And now, here he is! I must say, this whole refugee thing makes a lot more sense having read that story in Spectacular. Tarantula and his goons mess up the place, then he tells the priest he’s going to bring Spider-Man for them. But Peter is playing frisbee with Flash as MJ and Felicia make small talk. Flash & Felicia go for ice cream, and Pete & MJ note Felicia is being a lot nicer now. We know this is because Flash defended her from muggers and changed her opinion of him in ASM 337. Peter says he’s missed hanging out with Flash.

Peter, what are you doing? Call Daredevil, call The FF, The Avengers. Even a doofus who pokes people with his feet is too much for The Amazing Regular-Man.

The bloody blazes with it. So now Peter leaps into danger with no real reason to think he will survive, saying he hopes Aunt May will understand if it goes wrong. This is exactly what you were trying to prevent, dumb-dumb. He smashes through a window without killing himself, but then comes rolling to a halt crashing into a box. Tarantula takes it as an insult, like Spider-Man is toying with him. I guess that’s one way to look at it. He manages to avoid one lunge from Tarantula, but he knows that his luck can’t last. Ranchy says one of his boots is coated with a sedative and the other is a deadly poison as they square off again, now toying with Spidey. Outside, the cops are getting ready to storm the building, and Flash decides Spider-Man could get hurt, so he runs in. So silly. MJ wants Felicia to talk him out of it, but she’s disappeared. Poor MJ. Running from Tarantula, Spidey tries to web a crate and pull it down on his foe, but instead accidentally pulls himself up because he’s not strong enough, saving him from another attack. And Flash has not only successfully gotten inside, but stolen a machine gun off one of the goons!

Uuuuuuuuh… who’s gonna tell Michelinie Flash was in ‘Nam? I mean, he probably wasn’t, by now, but he was definitely in the army. Gunfire distracts Ranchy as Flash has found the priest and is leading him to safety! Flash is really heroing it up! But Tarantula is on top of him soon, hitting him with the knock-out boot and preparing the killing boot (So funny).

More trouble on the way! This is a pretty fun story. Not too long, some unusual angles. More on that next post. In the letters, a truly funny amount of people are convinced the Venom symbiote is really dead after ASM 333. It literally turned to ash and blew away in Web 1, and that didn’t turn out to kill it, why should it be dead now? I guess the average comic fan was a lot younger back then. But I don’t think I was fooled. One letter writer says he’s not fooled, either, but most seem to have bought it.