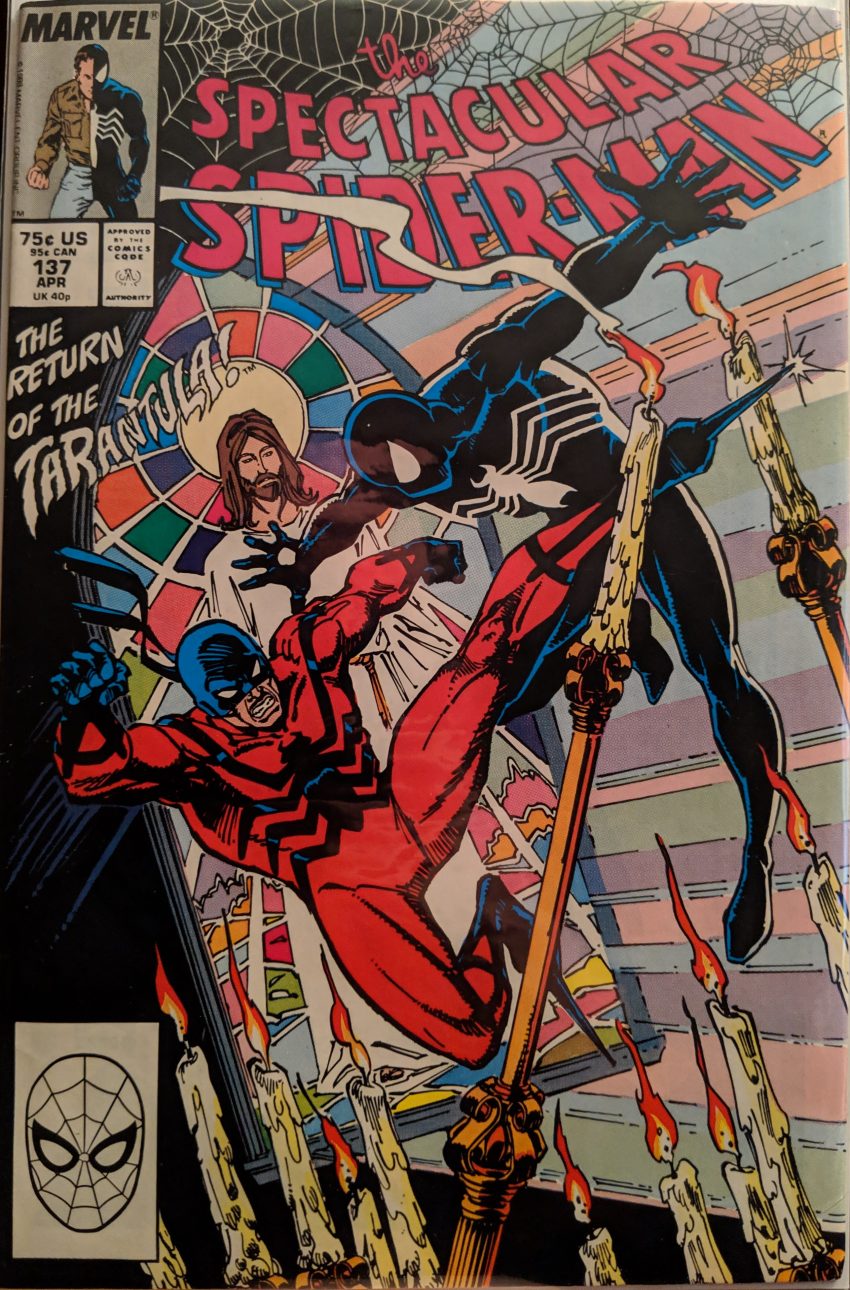 So, here’s a fun thing. This issue debuts the new regular creative team on TAC… and it’s the first creative team on TAC. Gerry Conway wrote and Sal Buscema drew the first issue back in the 70s, and now they’ve reunited, and plan to stay awhile. While Sal’s been working steadily at Marvel the whole time, Gerry went off to DC, came back, somehow became Editor-in-Chief for a minute, left again almost immediately, and eventually got into TV writing. Now they’re reunited, and it feels so good (theoretically, I don’t know them or anything). Plus: the villain in TAC #1? The Tarantula. So who else would they pick to antagonize their first issue back? But, of course, the original Tarantula is no more, so this is the introduction of a new one. It’s sort of a shame this goofy character is coming back, but the story here is actually great, so strap in, folks, and let’s get to it. Buscema continues to ink himself, as he will for a good while, and Bob Sharen provides the colors.

As the issue opens, Spider-Man is swinging over the city in the middle of the night, grousing about working for JJJ.

I don’t know that JJJ really creates assignments anymore since he became Publisher, but Gerry just got back, we’ll let it slide. And here he is, the new Tarantula. Can you believe they found another guy from the same country whose preferred method of killing people is lightly touching them with his toe? What’re the odds? Let’s see how the rest of that scene plays out, as it’s important to the rest of the book:

Spidey hears the scream, and detours to check it out.

LA Tarantula, rather than The Tarantula. Important distinction! Maybe would’ve been better if this was a woman? I dunno. In keeping with the methods of his predecessor, La Tarantula has goons, and they open fire on Spidey. But in the seconds it takes him to dodge the bullets, the whole gang vanishes. Spidey thinks the only way they could pull that off is if they had the precision of a military operation, and assumes the new Tarantula is a government assassin like the last one. Fair guess! Then approaching sirens make him flee the scene. The next day, a furious JJJ wants everyone at The Bugle to drop everything to find out what happened to Ruiz. We haven’t seen this side of him in a long time. He tells Robbie to put Ben Urich & Peter Parker on it, but Robbie is in a fog. A few days ago, in Web #36, he saw something that’s shaken him to the core. Someone called Tombstone, who seems to be a figure from Robbie’s past. This is what’s known as “foreshadowing.” Meanwhile, the now-obligatory MJ cheesecake shot morphs into something far more serious.

Suddenly this comic from 1988 is feeling really, really current, eh? Sadly, some things never change. Meanwhile-meanwhile, a car pulls up to a pier, and a guy in a suit gets out and walks over to a garbage barge, where, surprisingly, a hatch pops open in the midst of the trash, and he walks in.

Gullivar South looks like he was invented because editorial wouldn’t let Henry Peter Gyrich sink this low, but that’s totally conjecture on my part. He says elements in the CIA & FBI are providing resources and support as he hands Tarantula a folder full of people to kill, starting with Elvira’s family. Later, Peter meets MJ for lunch. He’s thinking more and more about going back to school lately, and talks with her about it. She says why not just do it, and he notes he doesn’t make much money.

Fair enough! While Spidey rushes off to The Bugle, Joe Robertson gets a hot dog while staring up at Kingpins building, wondering if “he” is in there. He doesn’t mean Kingpin, though.

I’m sure you guessed, but this is not the last time we’ll see Tombstone, who always talks in a whisper like that. We catch back up with Peter Parker, rushing to meet Ben Urich as he talks to a lawyer called Maggie Michaelson about Armando Ruiz. He was here seeking political asylum, but because his unnamed country and the US are close allies, no one from there is recognized as a refugee, so he was illegal (That… doesn’t sound like how it works. Does it?). Ben brings up the previously mentioned amnesty (aka The Immigration Reform and Control Act of 1986 in the real world), but Maggie says people like Armando are afraid to apply out of fear.

This issue is looking pretty good, I must say. The grit on these lines is actually pretty cool. Credits on Amazing dating back to the double digits, and Sal’s stuff has really never looked better. That’s impressive. Peter follows that guy, who he’s pretty sure is La Tarantula out of costume, but he’s accosted by a gang of young men who think he’s snooping for the INS and has to do a big Spidey leap to escape them. He feels how terrified they were.

Conway’s not pulling any punches with this one. Elsewhere, Tarantula and his goons are chasing Elvira & her family out of their home, making them flee to a church, because her husband is an enemy of his country’s government. I am amused to note Tarantula’s only named goons are Juan and Hildalgo, just like in the original Tarantula’s first appearance. The same guys? Who knows? At the church, Elvira calls MJ in a panic. She tells Peter where they are, and Spider-Man is off. The priest at the church tries to comfort the family, but then Tarantula smashes through a window.

Spidey quickly takes out some of the goons, but Tarantula is able to leap into him. Spidey angles their fall so they hit more of the goons as a police presence starts forming outside.

Spidey ignores Tarantula to focus on the goons, taking them down. Tarantula flees out the window he came in through, surprising Spidey, but only for a second, because…

Whaaaaaat? Say it ain’t so, Cap! There may be more to this than meets the eye. We’ll see in the next issue of TAC.

In this era, we have these scumbags who say comics have gotten “too political” these days for daring to deal with real world issues. Like it’s a new thing. As we’ve seen, from the Stan Lee days through this 1988 issue to today, Marvel Comics have always tackled issues of social justice. Sometimes they do it with nuance and compassion, sometimes they let Nick Spencer do it, but these dopes who think it should just be (white) dudes punching each other never got the point.

This one and many to follow I first read a year or two ago, in a trade simply called “Tombstone.” Uh, spoilers. Too bad I didn’t get the random idea to buy a zillion Spidey comics before I got that trade, I guess…