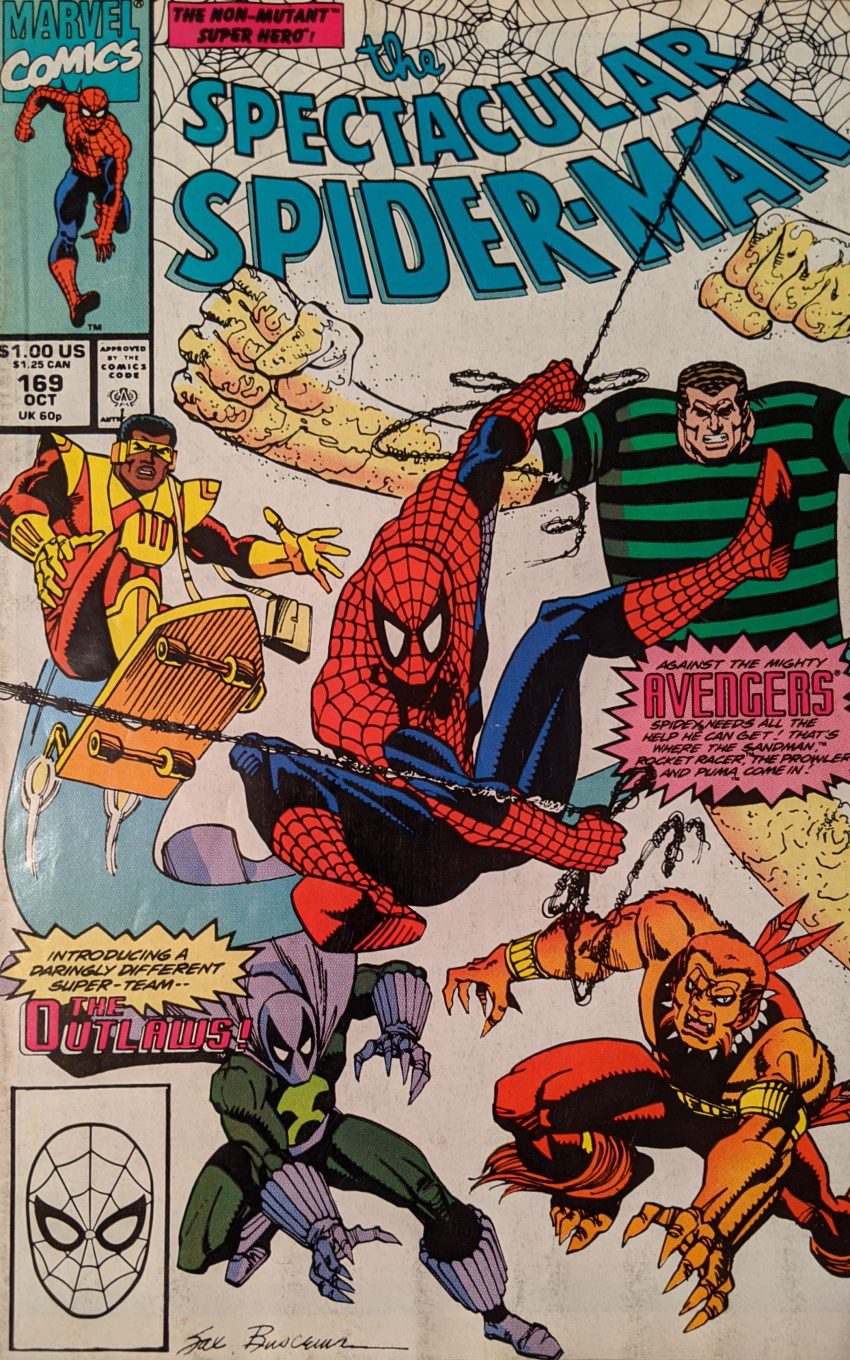 I do not believe in comic book backing boards. Unless something might actually be kinda valuable, I don’t think it needs a board. I don’t tape my bags shut, either. Starting from the late 90s, most of my comics are, in fact, not even in individual bags, but in the much larger Golden Age or Silver Age size bags, 6 and 12 per bag. It makes it easy to grab a whole storyline out of a box to read, and it’s not like these things are gonna be worth money. So when I come across a comic not taped, not on a board, it should be one from my youth. Except I am totally sure I didn’t own this or last issue, but they don’t have board or tape. Mysterious. Sometimes some of the less important stuff I bought off eBay didn’t even come in a bag, and I had to supply my own. Maybe these are among those. It’s now been quite some time since The Great eBay Hysteria of 2018, I don’t remember. Anyway! More Space Phantom! More of his mysterious boss! More Avengers! And I guess Conway’s gonna turn his favorite day players in the Spidey story into a superteam for a second. Sadly, also more of MJ considering an affair. I wonder how long that goes on. It feels noteworthy that there was, by this time, a long history of Batman leading a team called The Outsiders in a comic called Batman & The Outsiders. Spider-Man & The Outlaws. Feels familiar, is what I’m saying. Here’s how we get going this month:

So, are we to assume that not only does The Space Phantom know all these guys’ real names, but he also somehow knew Spider-Man would team up with them if the Phantom tricked him into letting the whatzit out of the box? Seems like a stretch. Spidey recaps last issue for the fellas and says he hopes they can all figure out what the stuff was, but that they may run up against The Avengers in the process. Also, Sandman calls Spider-Man “Webster,” making him the 3rd person to do so in 2 issues (Tho the other 2 both looked like She-Hulk). One by one, the, uh, Outlaws all accept. Spider-Man assumes this means he’s square with Puma, but ONCE AGAIN, Puma does not count helping Spider-Man as clearing his debt of honor. That’s getting goofy.

I’m so slow on the uptake that I only just realized everyone in this group is a reformed criminal except Spidey. And maybe Puma, who is not technically reformed, we just haven’t seen him assassinate anyone.

Uuuuuggggghhhhh, I don’t wanna read this subplot. MJ came to this place to tell this schmuck that she’s not interested, but he aggressively cuts her off, tells her she’s a passionate woman who deserves romance in her life, grabs her wrist as she flees outside, and forces her to kiss him. Swell guy!

Good God, man. First of all, what time is it? It seemed, like, late at night. A clandestine superhero meeting followed by a clandestine singles bar meeting, these things don’t seem like they should be happening before little Normie’s bedtime. Second of all, SERIOUSLY? In all of New York, MJ chose to meet this douche whose name I refuse to learn where Kristy might just happen by? What, was this place across the street from her building? Smooth, MJ! I gotta say, reading this hours after reading the most recent issue of MJ’s 21st Century solo series is a shock to the system. She is presented as an infinitely capable and confident, self-reliant person who would never be in this dopey soap opera cliche of a situation. And that smart, tough portrayal of her was originated by one Gerry Conway. This is a real low point for her, and he of all people writing it is a bummer. 70s AND 2020 MJ woulda slapped that dude, at LEAST. I mean, it was just back in TAC 163 that MJ knocked out Nick Katzenberg! Now this. Anyway, why MJ is being let down by the first writer to build her up, Spider-Man has been circling the city waiting for his Spider Sense to pick up the extremely powerful evil of whatever that stuff was, and that’s led him to the zoo.

The thing strips the meat off that poor orangutan instantly, and then comes for Spidey, who learns his web can’t keep it back. But as he’s cornered, the wall behind him collapses, courtesy of Thor & She-Hulk. Quasar zaps the stuff and that makes it fly away. Spidey thanks Thor, who says he should that She-Hulk, as she’s the one who saw what was happening through a nearby window. You’d think this is where Spider-Man realizes he was duped at the top of this story, but…

“Even though I have literally fought a clone of myself, met shapeshifters like The Super Skrull, and have not too long ago had several encounters with my long-time personal enemy The Chameleon, who can look like anyone, I WILL NOT budge on this. She-Hulk, who I have teamed up with twice recently, totally tried to kill me while unleashing an unspeakable evil. Case closed!” I mentioned it last time we hit this period, but I still really like the look of Sal’s Spider-Man here. He really makes the dense web pattern and bigger eyes work. For now. Prowler deactivates the security system, seemingly just by pushing an exterior button, and then they sneak inside. As they raid Kingpin’s files, Puma thinks about how he hasn’t decided whether or not to take Kingpins’ offer to kill The Rose, and now here he is stealing from him. Prowler finds everything about that building in Kingpin’s computer and puts it on a disk, with our guys escaping seconds before Kingpin walks into the room. Meanwhile, at their gig, Sandman & Rocket Racer have luck with the city’s files on that building, too, but…

Space Phantom, obviously, who is contacted by his mysterious master. When he’s told he deviated from the plan, he says whoever that is treats him like a machine, and he won’t serve him anymore and he vanishes. The mystery person says this is all part of his plan. This is some plan! Meanwhile, Rocket Racer finds the real Sandman, freshly returned from Space Phantom’s limbo dimension and a little confused, and attacks him.

Revelations! Not that Revelations. And hey, Spider-Man finally gets a clue almost 2 entire issues after the inciting event. Well, it’s a superhero comic, I’m sure everyone will talk it out peacefully next issue. At this point, I’m rooting for She-Hulk to knock him down a peg. He really deserves it this time.