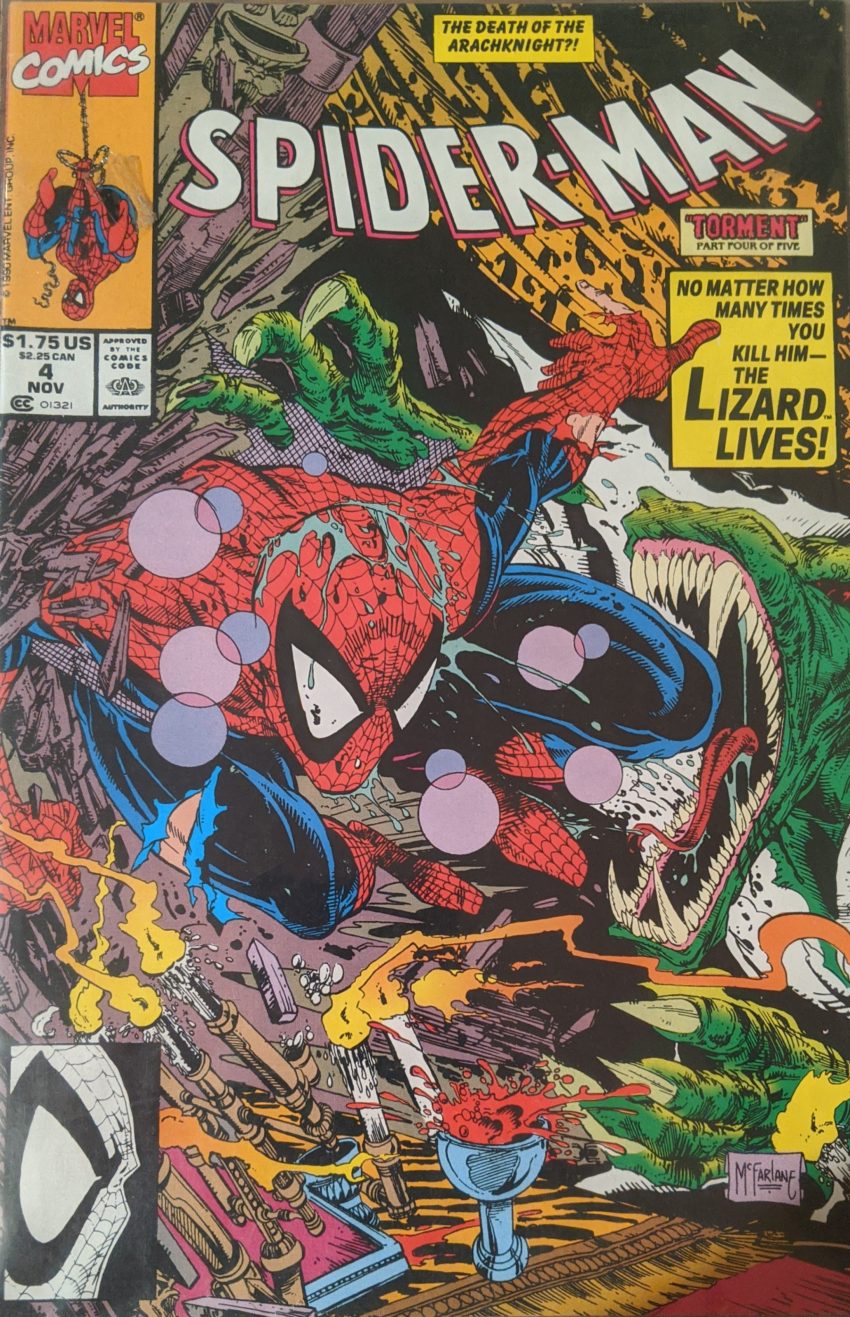 I may have been a relative newcomer to comics at this point, but one of the only comics I owned was ASM 313, so I knew enough to wonder “since when is The Lizard immortal?” upon reading that caption. Ol’ Liz’s mouth keeps getting bigger and bigger in this series. Soon he’ll be able to swallow Spider-Man whole. In this issue, McFarlane takes over as the colorist, too. Highly irregular for the time, and even for today, really. But as I said, even the most industrious cartoonists don’t wanna letter anything, so Rick Parker is hanging in on that part of the job. This issue’s first page text runs over various closeups of parts of Kraven’s now bone white body drilling with blood (This is way extreme for 1990), and the 2-page spread with “–rise above it all!” shows Kraven saying his hunt is over, he’s found his friend, Spider-Man, with The Lizard at his heel like a dog. Todd taking over on color explains a lot about the extreme color choices on these pages. The hallucinating Spider-Man imagines he’s been buried alive again, and it’s presented as a flashback to Kraven’s Last hunt. He thinks of Mary Jane, and that gives him the strength to dig himself free again. In his mind, he sees himself smashing up out of his grave in his black costume. In reality, he’s just flailing around in the trash.

For once, a woman in a skimpy costume isn’t all that gratuitous, considering her version of Kraven’s outfit isn’t much smaller than his was. A lil’, tho. This stuff was prrrretty confusing to me as a kid. I didn’t know about Kraven’s Last Hunt yet, and I imagine most people reading this didn’t know who Calypso was, myself certainly included. Buried alive? What? But I went along for the ride. She has The Lizard pick up the unconscious Spidey and they take off, the captions implying even (the still unnamed) Calypso doesn’t know how long she can keep this bloodthirsty new incarnation of The Lizard from eating Spider-Man. We check in on MJ to see her come home, find Peter not there, and just head back out for more partying, and then we cut to Spidey waking up in Calypso’s lair, which is obviously Kraven’s house from Last Hunt, thinking she seems familiar, but he can’t pinpoint it.

Of interest to me, right off the bat, this is completely in keeping with Denny O’Neil’s version of Calypso in ASM 209, and ignoring Bill Mantlo’s totally different portrayal in TAC 65. In response to Spidey, The Lizard tries to eat his head, but once again, Calypso stops him, and he freezes in his tracks. Then she starts mixin’ up the medicine again. We cut ot MJ literally powdering her nose before she goes back to the dancefloor, then return to the superbusiness. Honestly, why is MJ in this? Spidey is trying to figure out what’s going on as The Lizard sits, jaws still wide, right in front of him. Meanwhile, Calypso is flashing back to her newly minted origin, which totally sucks.

“Oh, that evil magic of those weird savages in the Carribean!” Just wild racist. Aaaaanyway, the drums finally stop, The Lizard licks some blood off our hero, and in a trance, Calypso says it’s time. Spidey thinks if he’s gonna do something it better be…

Well, that’s it, guys. I know I’ve been fooled before, but I’m pretty sure Spidey’s dead this time. Guess we’ll see his funeral next issue. Meanwhile, in the letter column, Todd says he’s read over 3,000 letters about Spider-Man #1. It was very unusual for a creator to answer the mail in this period as opposed to an editor, and I think it’s cool he chose to do so. He prints some positive ones and some negative ones, and also this one:

You ok, buddy? The 5th one on his list refers to the 2-page, comic-style ads for the TubrGrafix 16 game Bonk’s Adventure that interrupted the flow of many books in this time, including Spider-Man #1. Not quite as random as it looks.