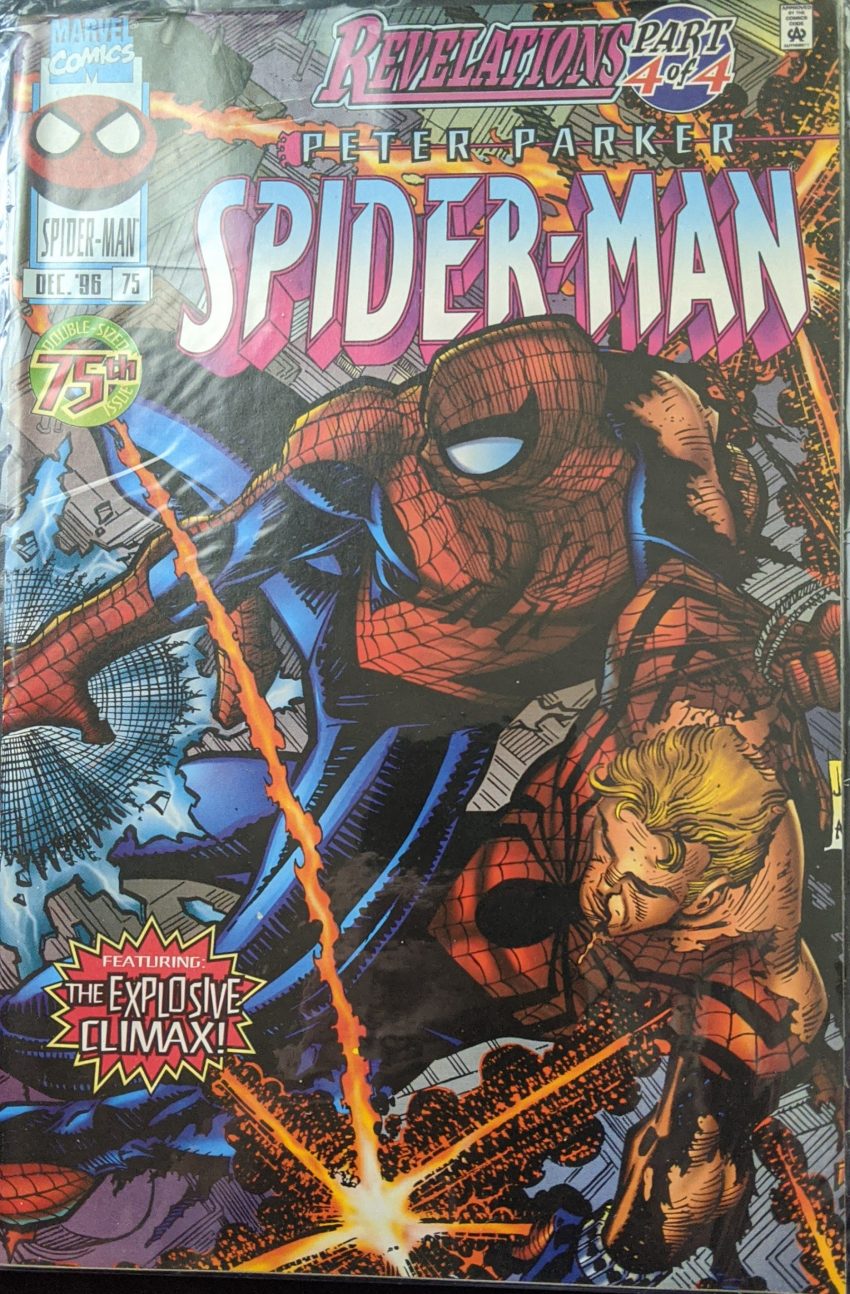 Alright, let’s get this over with. This is a wraparound cover. Here’s the back:

Romita going hard for this one already. And as of this month, he’s teamed with the magnificent Scott Hanna on inks. Al Williamson is a tough act to follow on this book, he was a perfect partner for Romita, but Hanna is totally up to the task.

Lookit that gorgeous city up there. Meanwhile, in a chaotic 2-page spread, Peter races to the hospital only to find no one in it can tell him where MJ is, or even if she was ever there, until he finally encounters “Dr. Folsom.”

Nice touch from Kevin Tinsely on the colors as Peter falls, very nice. Everything’s pumpkins this issue. Elsewhere, it’s 15 minutes to midnight, and everyone’s arriving to The Daily Bugle under false pretenses, and slowly starting to realize they don’t really know why. Everyone but Peter, of course.

I mean, this sucks, but the art team is crushing.

I mean, this sucks, but it’s such a joy to see Romita, Jr. drawing the real suit again.

It was very important to the team that we see a scar from the wound. Had to try as hard as possible to make sure no one thought this was another fake out. Because it’s not, but I mean, it sure could’ve been, after the last couple years. At The Bugle, everyone’s figuring out they’re in trouble even before they discover the phones are dead, the elevators don’t work, and all the stairs are blocked. Aaaand in a sports bar downtown, Arthur Stacy lays out to the 3 cops from last issue that he’s back because of the Spider-Skeleton from awhile ago, and he’s convinced Spider-Man is a murder, and they’re going to prove it. Wherever they are, Norman is telling Peter the deal. How his Goblin formula had the unexpected effect of giving him super healing. How he was at his own funeral, and most preposterously, how he was planning to come right back and kill Peter when he saw Harry trying on the Goblin suit, and decided to let him give it a try. So, he says, he “left the United States to pursue other ventures on the European continent.” Just like that. Who would buy this?

The classic “you killed my loved one even though you didn’t” cliche. Why not? Nothing’s gonna put this plot twist over. At The Bugle, JJJ is blustering around hoping no one will notice he knows full well they’re in real trouble, but they all do. Ben Urich has decided to just try to write the story of whatever happens. Flash awkwardly tries to reconnect with Betty and is soundly rejected.

“The short time since 1965!” This is far from the last time the book will be frantically trying to get you to think of this 30+ year old cast as young and fresh going forward. A quixotic endeavor. I do like this little moment between them, though. It kind of emphasizes how literally every character in Spider-Man is allowed to grow and change and mature… except Spider-Man. And that’s why we’re here.

Peter finally starts picking up on what Norman is saying and snaps out of it, but he’s weak still. Norman smashes him through a window, reveals The Bugle is just across the street, and invites him to come watch everyone he loves die.

Norman smashes through the window and grabs Jonah, yanking him outside and complaining that he never did enough to help destroy Spider-Man.  Spidey swings up, but Norman zaps his web, sending him falling, before heading back inside.

$5 to literally anyone who can prove what Angela Yin & Ken Ellis did to incur the wrath of a villain who’s not even been in the country for 5 years. Spidey webs The Goblin out the window, and they finally get down to business. As they do, the news starts to show the battle, leading Devon from Ben’s job and Arthur Stacy to head down there. Ben, meanwhile, rouses the strength to go try to help, and little Normie’s babysitter down on the ground starts telling people to flee. And up above, the battle continues.

While they keep it goin’, Ben, having switched to normal clothes somehow, bursts into the city room, allowing the others to get to the stairs. Then, he goes around the room gathering up the bombs to try to get them somewhere safe, but Flash comes back in and tries to pick one up.

Up top, The Goblin unloads his arsenal on Spider-Man, who simply dodges everything, barely even moving. His rage rising, The Goblin asks how Spider-Man can keep getting back up.

Ben smashes into a car below. Both Spidey and The Goblin already have their masks back on, which is kinda funny given them deciding it was about Peter Parker and Norman Osborn 2 seconds ago, and The Goblin zooms at our hero, electric fingers blazing, but Spidey dodges while dumping the bag of bombs in Norman’s lap.

If only he were really dead. Soon, down on the street, the assembled near-victims of Osborn’s attack watch an EMT look at Ben, but as Spider-Man arrives, he’s told there’s nothing to be done. Ben whispers that, clone or not, Peter is Spider-Man now, and to tell his niece about him as he dies.

Pretty conclusive. And yet, what if I told you Ben comes back? Of course he does, it’s comics.

Garbage! How DARE they try to write off this loss in a single page of bad dialogue! But that’s exactly what they’re doing. They can’t go through all this only to have Peter & MJ sad for who knows how many months, even if that’s EXACTLY what should happen. They aren’t even afforded the dignity of reasonable human reactions to loss. And with that giant fart sound, The Clone Saga is actually, finally over.

According to the oft-referenced Life of Reilly column, after 2 and a half years of running in circles, it was finally proposed that they reveal Peter was real, Ben was fake, and some classic Spider-Man villain was behind all of this. MJ would lose her child and the grief would cause her to leave Peter. You get your single Spider-Man, and we’re finally done. But, of course, even aspects of that didn’t hold for long. The original proposal was Doctor Octopus, which would have worked on a few levels, since he never should have been killed in the first place and also died knowing Peter’s secret. Some adjustments and a good reason for his fake death and you got a stew goin’. But then Marvel Editor-in-Chief Bob Harras decreed that the villain be Norman Osborn. Literally no one liked this. He’d been dead for nearly 30 years. If he wasn’t dead, why hasn’t he been around? Harras said he went to Europe to build a criminal empire. Tom DeFalco is said to have pleaded the case that Norman was a very hands-on villain, and if he really survived being impaled at the end of ASM 122, there’s literally no way he wouldn’t come rushing back to murder Peter the second he was able. Harras had made his choice, though, and so we all must suffer for it, even today. The idea was floated to reveal Norman was behind all kinds of other things over the years, too, as alluded to in this issue, but Spider-Man Special Projects Editor Tom Breevort (Now Executive Editor of the entire Marvel comic line) essentially said him being alive doesn’t make any sense and readers will like it even less if they start bogging down the end of this story with a bunch of retcons, and they should just deal with it as-is. So they did. This story is rather infamously not even liked by the people who made it. But they had a problem and they had to get out of it, and now they’re out of it. And insane as it sounds, 11 years later, we’d go through the exact same situation with a different “problem” being resolved by a different utterly terrible story that no one, creators or readers alike, could be happy with. But that’s getting ahead of ourselves. For my part, here I was, by now a dumb 18-year old STILL buying this garbage. I knew the real Spider-Man was coming back, and I was happy. And then, I get this. Norman coming back was so stupid, so lazy, so nonsensical, and I despised it. I spent literally every comic he appeared in after this hoping he’d die again for, oh, 10 years before I accepted that would never happen. And while I wasn’t sure Spider-Man should be a dad, MJ & Pete losing the baby was such a horribly grim thing. How can Spider-Man be the light and fun adventure book it’s supposed to be with a DEAD BABY casting a shadow over the proceedings? Their answer to that turned out to be simple: Forget it, Jake, it’s Chinatown.