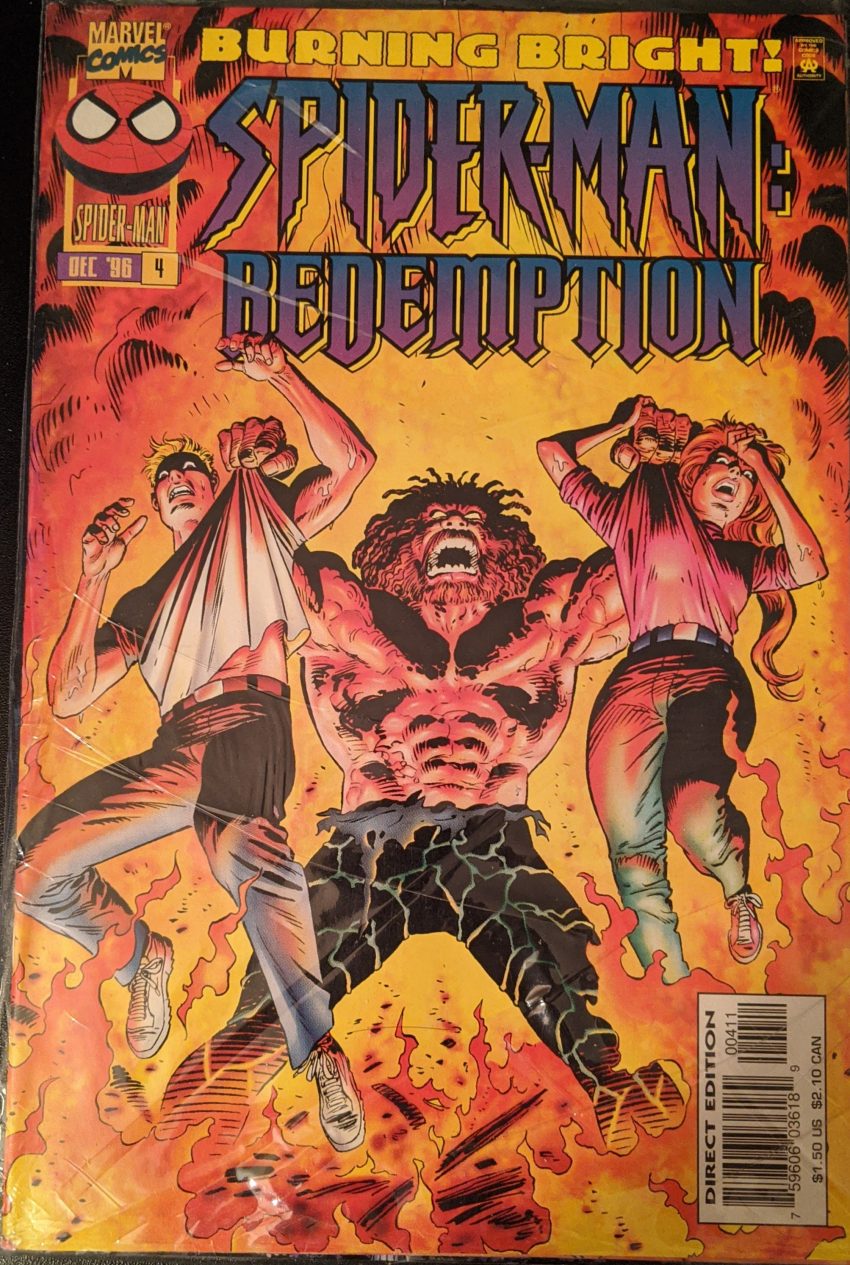 Who looked at this cover and thought “Yeah, I’m slappin’ ‘Burning Bright!’ across the top. That’s totally necessary.” Cover copy is almost always terrible, but sometimes it’s just pointless.
Anyway, after flashing back to his “birth,” Kaine carries a guy out of the diner he just blew up.

I don’t get it, either, Kaine, but he tells the kid he’s going in to die with them and internal monologues about how that fire was only meant for our 3 principle characters as he finds Janine & Ben in the burning wreckage.

A 2nd explosion rocks what’s left of the diner, and the kid outside says no one could’ve made it out of that. But Kaine totally took Ben & Janine out, and ran them up a nearby building onto the roof. He puts them down and tells them to go find “what shreds of happiness” they can.

As Ben & Kaine’s fight starts back up yet again, Ben tells Kaine that turning himself in is the only way to find the peace he’s searching for, but it’s Janine who takes his words to heart. Meanwhile, down on the ground, a random detective who “was at the Parker trial” recognizes Kaine up on the roof, and calls in all the backup he can get. Kaine’s ranting about how all he wants is death when some cops burst onto the roof, so…

Kaine hops up on a billboard and yells about the terrible things he’ll do the the cop in his hands to get the others to shoot him. Janine first tells Ben they have to run, but then they both realize what has to be done.

Ben takes Kaine down into a nearby alley, thinking about how Janine’s resolve drove him to act.

Well, that’s weird. Kaine watches as Ben tells Janine they have to go, but she says she’s tired of running, and that his speech about finding peace resonated with her, and she wants that peace for herself.

As long as he lives may not be as long as he thinks. You really have to wonder where Peter was in all this. I know it’s not his story, and I certainly see this worked better without him, but… he’s around, and as much a part of Ben & Kaine’s story as they are. At any rate, a reasonable follow-up to Lost Years, in the end. As much an ending as you could get in a superhero comic, I guess. This is the end for Janine, at least, who never appeared in another comic. The same obviously can’t be said for Ben, but also not for Kaine, as you might expect. But I don’t think he appears in another comic I own. Decades later, he would be revealed to still be alive, go through various shenanigans, become the new Tarantula for a second, then get his cellular degeneration fixed and become a new The Scarlet Spider, a more brutal version of Spider-Man living in Dallas, TX. I dunno, man, I didn’t touch any of that nonsense, so this is effectively his exit from the blog. So long, dumby!