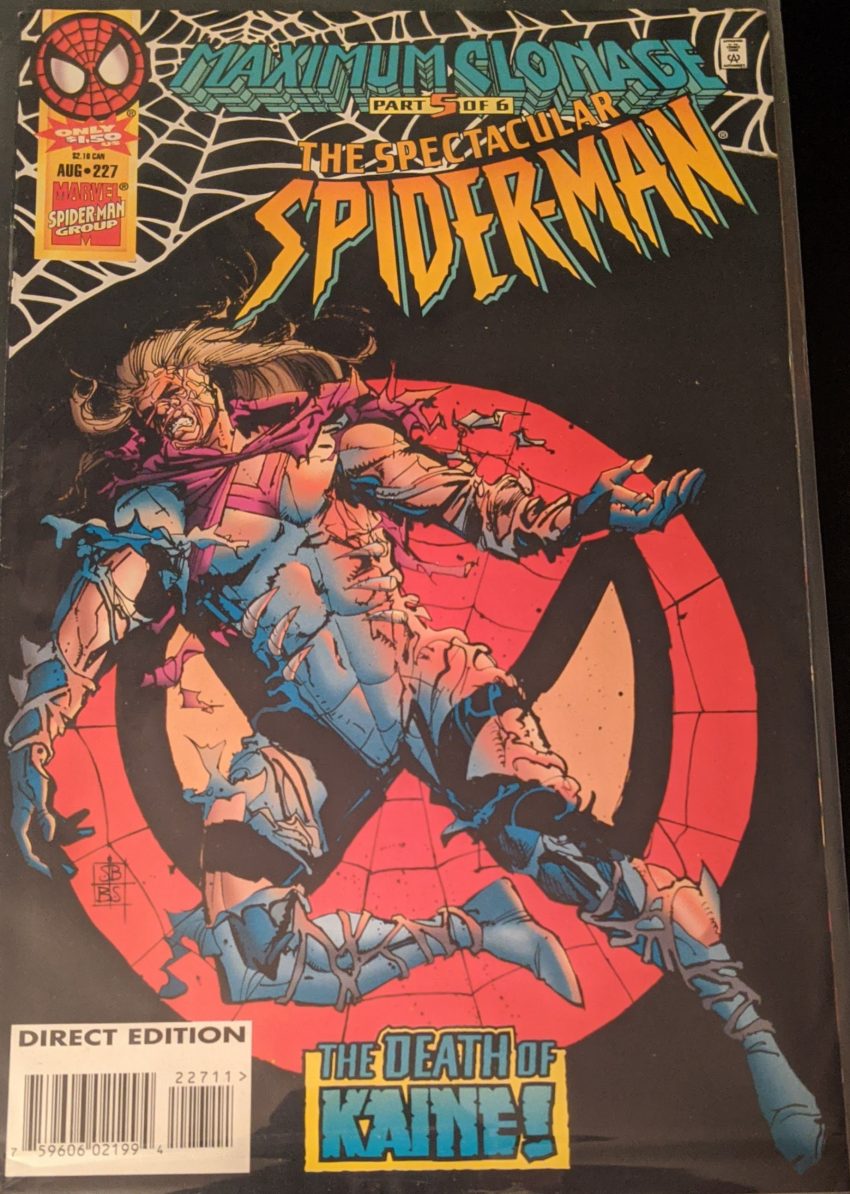 Would that it were. The opening splash this month looks weirdly nothing like Sal at all.

Not the posing, not the figures, nothin’. Color Separations by Malibu, for all the fans really knew what that meant. Ben’s been the real Peter for just a month, and trying to describe his situation is already really unwieldy. Only gets worse… He & Kaine fight some Spideys and do more recapping until Ben wonders where Peter is. We cut to Mary Jane, internal monologuing how it was totally cool and ok that her husband punched her across the room (“Peter backhanded me… and sent me crashing into a wall”) because he’s had a rough time and he wasn’t thinking as she piling up a bunch of spider tracers and her special one to set them all off at once, hoping it will get Peter to come home. I’m not even gonna go into that.

We’re at a place where the Gwen Stacy clone is the one who has to tell Peter to stop being a dumb baby and go see his wife. This is quite a hole they’ve dug. Elsewhere, Jackal has the guy from the Alpha who survived his virus in a tube in his lab, trying to figure him out, but thing happens, so we leave.

Kaine starts punching clones to pieces while Ben begs them to stop fighting and live. How would that work? Hundreds of Peter Parkers in the world. And then as weird a moment as any in Mary Jane’s life:

Sal drawing it like they’re gonna kiss is very strange. Not nearly as strange as MJ just rolling with this, tho. “Oh, ok, Gwen’s clone, sure, we’re pals!” Maybe she’s gone a little crazy, too. Couldn’t blame her. Back at the fight, Ben is still pleading with the clones ot lead “full productive lives” as Kaine smashes them into goo by the truckload, and then they all crash through a skylight back into Jackal’s lab, all space and time having lost its meaning.

Calling out how awful all the new character names are is not a good idea, y’all, because they really are, and we know it. Cut to The New Warriors getting a page to tell you they’ll be looking for the virus survivor and Ben in the next issue of their book (Where he will join their team), then back to the actual plot of this book.

You’re better than this, Tom, good grief. Also: MODEM him some files! Spidercide says Scrier took out his degeneration factor, told him Jackal has been a disappointment, and prepares to kill his maker, but Kaine stops him, Why? Ben Reilly is still telling the clones to live a full life even as they’re turning to soup and as he kicks them all around when he whips one of their masks off and sees they’re goop monsters underneath. How is he so stupid as to not consider that before now? Now he’s on Kaine’s side about putting them out of their misery.

Sienkienwcz went all-out on the goop people. He was telling them they can live and be happy 2 seconds earlier. None of this makes any sense. Elsewhere, even Kaine doesn’t know why he saved the Jackal, wondering if he still wants to win Jackal’s favor, when he has yet another vision of MJ dying. He sees who killed her for the first time a second time, because this story is complete trash, and that distracts him long enough for…

Kaine, who killed Doctor Octopus, the greatest villain in this history of Spider-Man, jobbed out to “Spidercide.” What a mess. Ben saw that happen and attacks in a rage. Who even cares? Literally, who cares? This is unreadable garbage. My patience is completely gone.

Un. Readable. Garbage. Ben punches Spidercide into some control panels, maybe electrocuting him and shutting down the compound. The survivor guy busts loose so he can go be in New Warriors, Ben has somehow gotten his foot stuck under some wreckage, and broken his ankle, and doesn’t know where Spidercide went. What happened??? They were standing right next to each other and nothing exploded!

Fah, whatever. One more issue of this dreck. Unfortunately, it’s oversized.