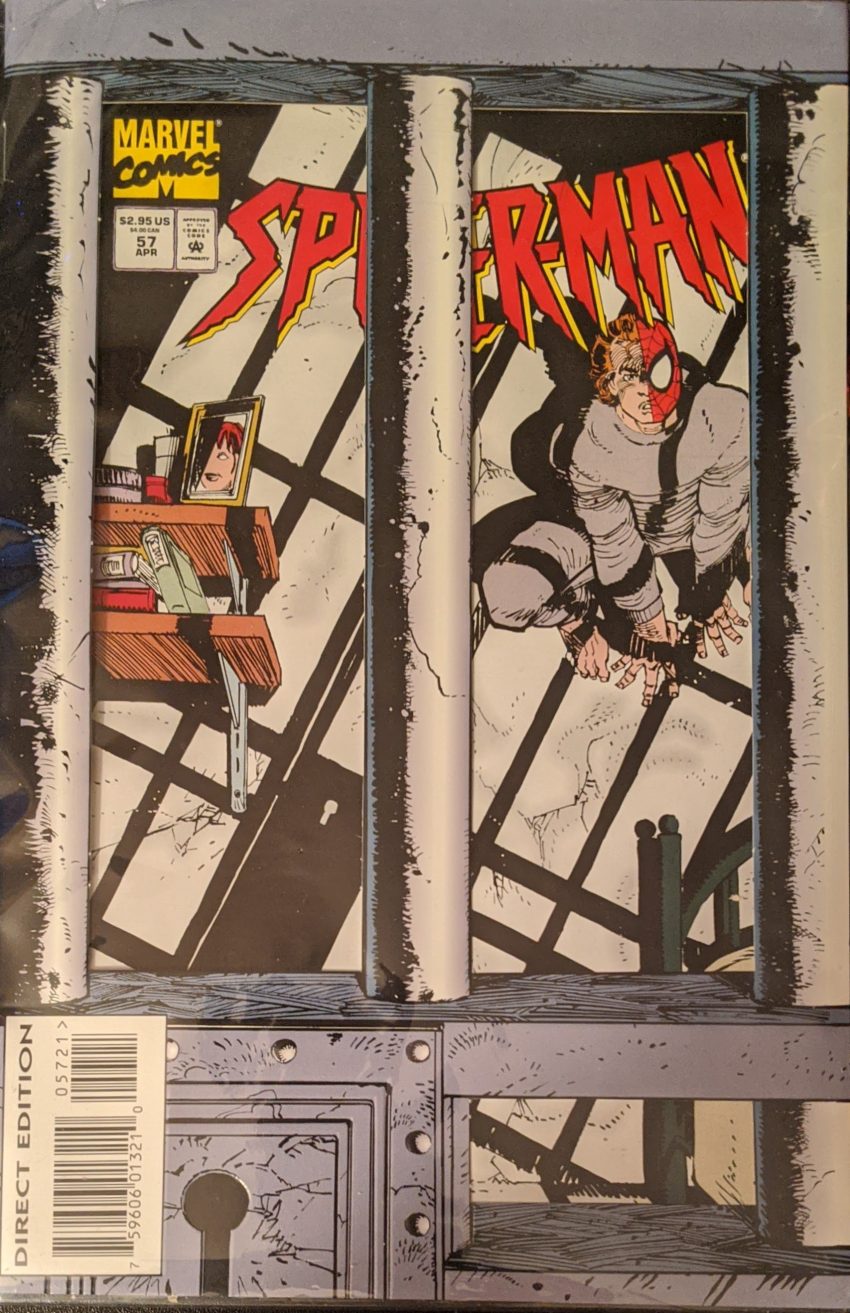 Welcome back to grim’n’gritty sad times 1995, where things won’t get much grimmer or grittier or sadder than this. Aunt May dead! Peter arrested for murder AT THE WAKE! And look at this cool (“cool”) die cut cover for no reason. The bars open to show Peter in his cell.

Really enhances the experience, doesn’t it? My main man John Romita, Jr. is briefly back, and this is a fascinating period for him. Look, we’ve already established this can detour into a JRJR fan blog at a moment’s notice. The stuff in this book has elements of his late 80s style still, but he’s also well into his new, totally unique, super blocky thing. From panel to panel, you can kinda see him in transition. Joe Rubenstein inks and series regulars Howard Mackie & Kevin Tinsely write & draw. And we start with a slap in the face!

The mullet is back with a vengeance! This page is so CRISP. Ugh, I could really just run a fan blog. When we last left our heroes (In ASM 400), Ben had come to see MJ now, at one of the most chaotic and terrible moments in her life, and it was implied his agenda was sinister. But, I mean, come on.

Ouch! While MJ collapses in a wreck, Peter is in court, where he finds out he’s wanted for murder in Utah, and apparently in NYC now, also, and because the things he’s done are so gross, he is being denied bail.

JJJ is a complicated man. I’ve given my own totally unsanctioned breakdown of the phases of Romita’s evolution before, and I gotta say, this is among my favorite stuff. The linework is razor sharp, and he’s really getting into the groove of his remarkably 3D drawing style. Everything just pops for me. It’s a shame the story is so dumb. Meanwhile, the amnesiac THIRD Peter Parker we saw pop out of a vat in the previous block from this era, wanders the streets of Queens, seeing familiar sights but not knowing why they’re familiar. While he does that, the original Peter & MJ meet with Pete’s fancy new lawyer to strategize, and Jacob Raven sits in his hotel room, feeling doubt about the case now that he’s seen Peter’s reactions today. Who could be responsible for these crimes?

While Kaine goes on a pointless rampage, MJ is home, freaking out. Worried about Peter, and now worried about the health of her unborn child, wondering if his weird spider blood could cause it trouble. She goes out for some air, wishing she had someone to talk to as The Scarlet Spider shadows her down the street. We have one other character to catch up with from last time…

Such mind games. In a rainstorm as only Romita, Jr. could draw it, the amnesiac Peter stops a purse snatcher, then wanders away. He remembers someone telling him with great power comes great responsibility, but he doesn’t know who. Elsewhere, Ben is still following a deeply distraught MJ, wishing he could figure out how to make her believe he’s on her team, when she’s approached by some people.

Doofus Traveller and The Revolution are back, too. But we cut away to Jacob Raven at The Parker Residence, trying to talk to MJ because he’s filled with doubt about Peter. And that’s when Kaine hoists him onto a nearby roof and tells him he’s got the wrong guy. Raven says the evidence is clear, so Kaine burns “the mark of Kaine” onto his face and says “Tell me what you think of your evidence” as he leaves the scene. That should help our guy, I guess. Funny what I don’t remember about this stuff. I know how this Peter-in-jail story ends, but I don’t remember when we get there.

Ben thinks Traveller didn’t seem this powerful last time as he tries to get back to them. Traveller answers the question of his power by telling a building to fall on Ben, and it does. Then fire starts erupting out of the street, and Ben is barely staying ahead of it. MJ sees this and thinks maybe he’s ok, but Traveller is getting annoyed, and has Ben seemingly engulfed in a wall of fire.

Traveller gives up, saying he, Ben & Peter will get to know each other soon. Ben tells Mary Jane he thinks she’s still in danger, but he’ll leave if she wants. She says she’s willing to talk but he has to leave the mask on. A fragile cease fire.

So much happening at once. They were certainly keeping us readers busy, if nothing else. Like ASM 400 this issue has back-ups, and like ASM 400, this one has another short detailing the immediate days after Ben found out he was a clone the 70s by DeMatteis, the dynamite team of Romita, Jr. & Romita, Sr., and colorist Paul Becton. “Five years ago,” Aunt May is puttering around the house when she thinks she sees someone outside. Ben just managed to hide in time.

He’s carrying the bag from The Official Marvel Comics Try-Out Book! Is this the only kind of bag Peter likes, the only kind of bag John Romita, Jr. likes? Ben catches a bus to San Francisco, not really having a plan, just trying to get as far from New York as possible. And on the bus, he dreams…

A cliffhanger where a guy in the present could die in the past isn’t much of a cliffhanger. The rest of the book is a pretty random assortment of Spider-Man pinups. Some by future Spidey artists (Mike Deodato, Jr. and Mike Weiringo), some by people I know (Pat Broderick and Steve Epting), some by people I’ve never heard of (Yancy Labat and Fred Hayes), none by anyone you’d associate with Spider-Man in this era. And some of them depict very specific, random events, like Marvel Team-Up 65, ASM 330, and MTU 100, while others are just pin-ups. I wonder how these were commissioned.

Deodato will take a turn on ASM in the early 2000s, and while I think his art is pretty bad in this period, this is probably the best Spider-Man I’ve ever seen him draw. Ringo did the Juggernaut fight…

Very nice. And Steve Epting, who would go on to be a truly excellent artist, but whos 90s stuff really was not for me, does a surprisingly cool (For this time) Green Goblin-based image:

These days, he draws a super Romita, Sr. influenced Spidey that I really love, and you can see it coming here. Anyway. Come back next time for more sadness, more grimness, and one more die-cut cover.