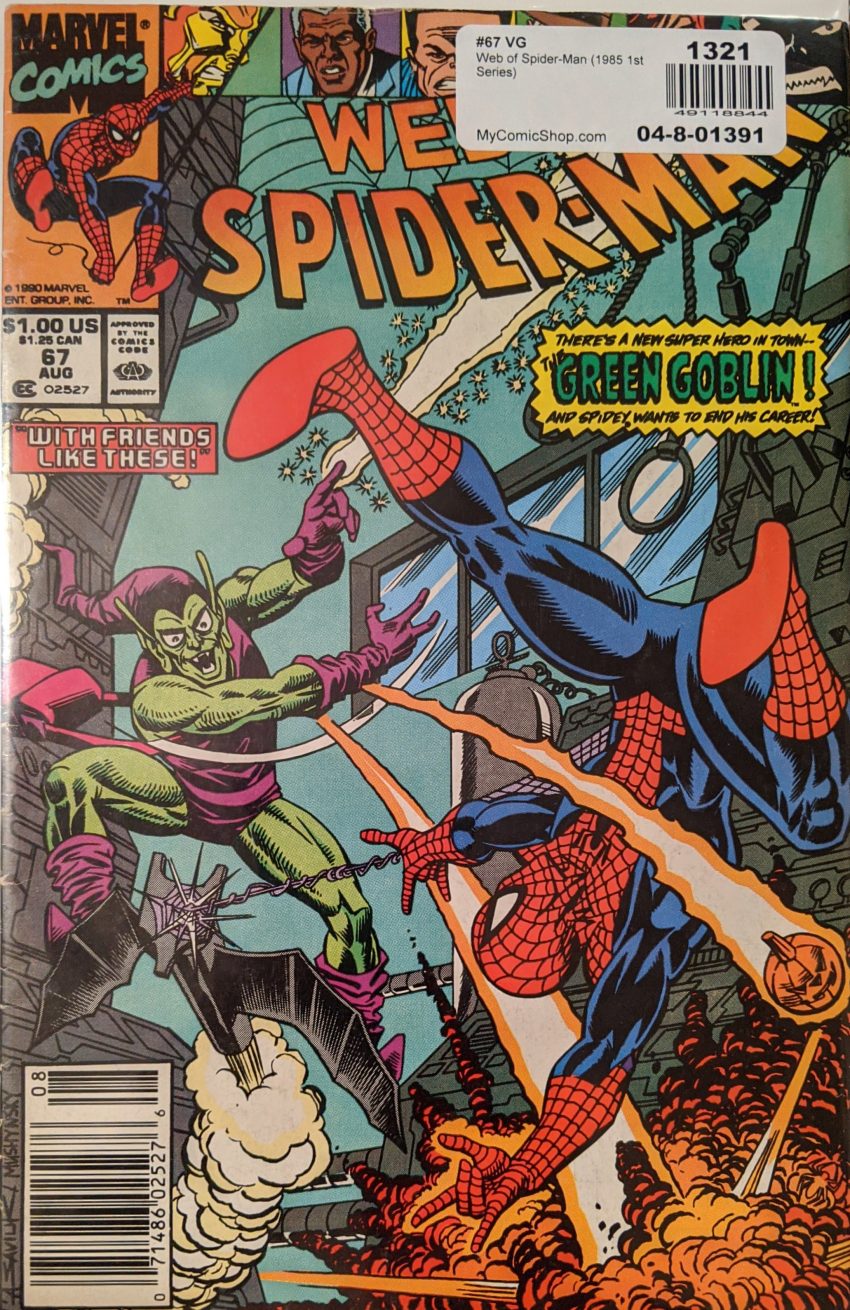 The Green Goblin suddenly having fangs after all these years (To say nothing of last issue) looks weird. And… does that mean he’s wearing fake teeth in that mask? This issue is scripted by Ben Trovato from a plot by Conway. I looked it up, and “ben trovato” is apparently an Italian phrase that means “made up, but still appropriate”, and I can find no record of Ben Trovato being an actual person. So… that’s weird. One wonders what that even means in the context of this issue. If someone else scripted it, why under a fake name? Did editorial demand a rewrite and Conway refuse? He’s not much longer for the Spider-Titles, maybe there was a dust up here that made him quit. Whatever happened, this issue opens with Tombstone  on the street, literally smoking, when some extremely dumb cliche thugs attack him. He dispatches them easily while the art makes sure we can’t see his face. Then, elsewhere, Spider-Man gets a fleeing Green Goblin to stop and talk.

The ol’ “Is whoever’s in the Green Goblin suit remembering my identity” plot. Surprisingly common at one point, not been dusted off in a while. Spidey thinks about that  in a pretty not-Conway-sounding monologue as he returns to the plant in time to see Molten Man being arrested for helping Tombstone in spite of his story. But perhaps more importantly for us, Joe “Mr. Ethics” Robertson is lying to the cops about how he knew to come here and letting Raxton take a fall in the process. Very nice.

The next day, Peter & MJ are sorting their laundry while discussing how Harry could ruin his Spidey career and endanger MJ (Why would he? What’s he done to indicate he has ill intentions?), so Peter decides to go try to talk to him and see if he remembers his secret.

So Spider-Man soon sneaks into the office of the construction company, and soon after that, he’s fond Harry’s newly appointed Goblin Lair. Harry is telling himself it feels good to be a super hero.

Shades of Kane in ASM 122 down there. Harry tries to fight back as Spider-Man makes the point that his dad trained to be The Goblin and Harry doesn’t have that skill, all while easily handling him for awhile.

UH-OH. Harry is in full-on crazy mode now, ranting about clearing his father’s name as the fight goes outside. But SPidey easily outwits him and knocks him out.

That can’t be good news! As for the rest of this issue, Hammerhead’s mansion finds itself under siege by an invader who is obviously Tombstone, but kept in shadows for some reason.

Oh, he’s got lines on him now. What a dramatic change! Feels like Conway must have objected to the Harry Osborn stuff here to get “Ben Trovato” involved. I wonder what he wanted to do. Maybe not have him turn evil, or maybe not have him remember? I guess we’ll never know.