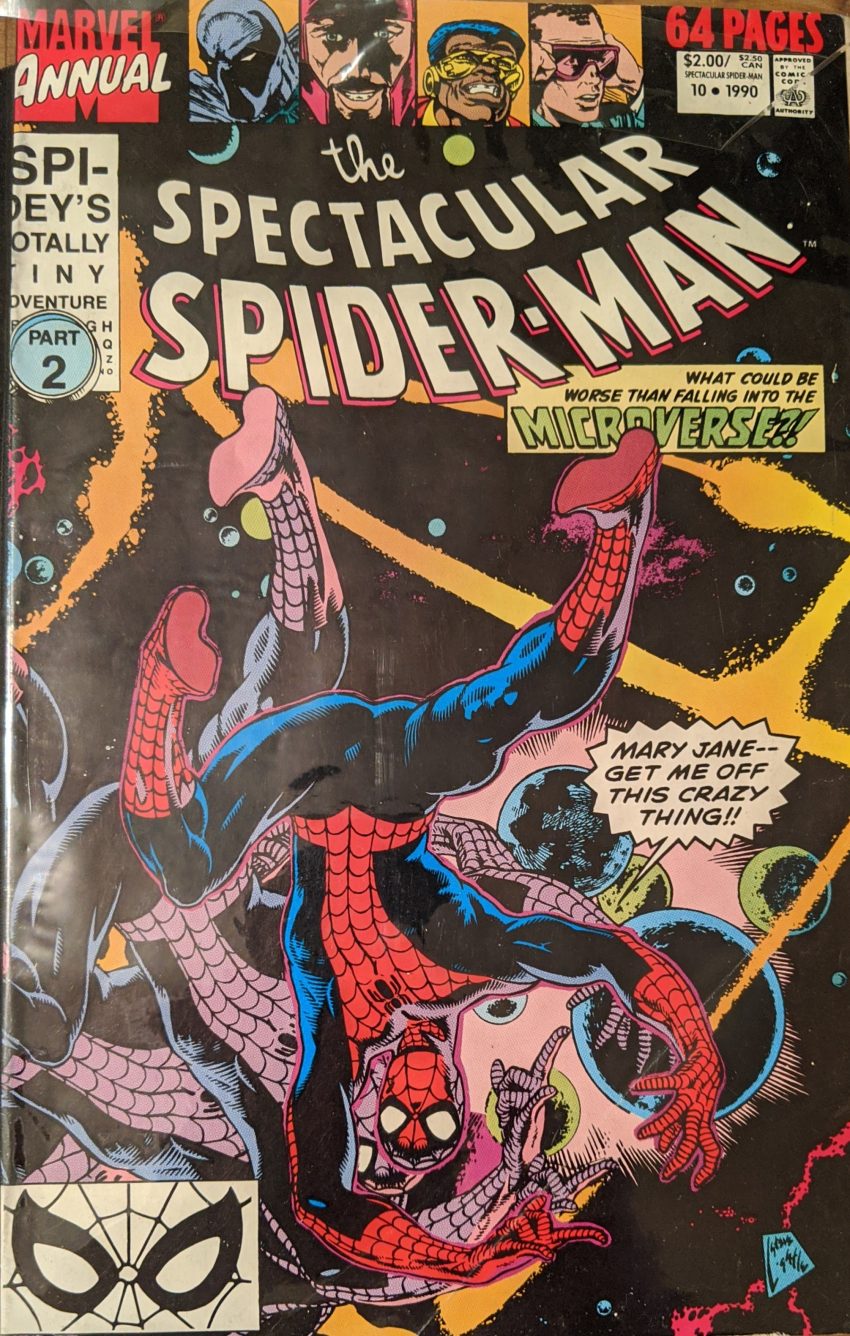 Why would young me buy a random Spectacular Annual in the middle of a mutlipart storyline with the meager funds available to me? Why, because of the Todd McFarlane Prowler story, of course. Supporting this theory is the fact that that is literally the only thing I remember about this issue besides the cover. Slick Steve Lightle cover. I have no idea how to pronounce his last name, but I quickly came to appreciate his work as a kid. His stuff just feels classy. You might expect, since this is a 3-part story in a series of annuals, disconnected from the main books, they might hire one creative team to do all 3 parts, and you would be wildly incorrect! This installment of the Micro-Spidey story features a plot by Gerry Conway, pencilers by Rich Buckler, inks by Mike Manely, and colors by who else, Bob Sharen. But it is of particular note for a script by Stan Lee! It’s always a surprise when he pops up. We begin with Spidey arriving home to MJ, still tiny. She is understandably freaked out.

For the record, MJ had blue eyes in the old days, but I guess the stereotype of redheads with green eyes won out in the end. It’s interesting to see Buckler, a comics artist with like 20+ years of Marvel credits at this point, adapting to the post-McFarlane new normal here. He seems to be hewing much closer to Alex Saviuk, which makes sense. Boy, the script in this, huh? Spidey  makes it back to MJ after some Comedy Business and asks her to call Harry Osborn, because he’s sure he’s still shrinking. Then a mysterious shadowy figure somehow watching the situation gloats about it.

Who could that be? MJ has now somehow gotten Spider-Man to Harry Osborn, who’s checking him out under a microscope. Love to know how she explained this, but we aren’t told. Spider-Man recaps last issue, and then…

So when Ant-Man’s gas didn’t work, he just… left? Wouldn’t Ant-Man be the best guy to talk to about this? Or, you know, Hank Pym? These goons look similar to the ones last time, but are colored different and aren’t German, so who knows? Spidey darts around knocking them out in what reads like a classic sort of Ant-Man fight scene until there’s only one left, but…

Very cool staging of the action there. Spidey gets the bullet to miss, and it even ricochets back and hits the shooter in the arm, but it also sends our hero flying until he smashes into some equipment and passes out. When he wakes up, Harry is looking at him under a microscope again, but now because he’s microscopic!

But instead of making Spidey grow, Harry’s bombardment makes him shrink even faster, and soon, he’s lost in The Microverse, which Harry knows about. That raises some questions for me, but this isn’t the time. You know, I’ve been calling it coincidence, but there is no question Buckler is shamelessly swiping Spider-Men from other artists throughout this story. He’s copped from everyone from Steve Ditko to Gil Kane to Ross Andru to McFarlane to the aforementioned Alex Saviuk, and on the next page, he snags Jim Lee’s Spidey from the cover of Punisher War Journal 14. Bad form, Rich! I’m beginning to wonder if there’s an original Spider-Man in this entire story, but I don’t have the time or interest to source every image. At any rate, our guy keeps shrinking and shrinking until he does enter The Microverse, which is where the comic The Micronauts took place. It was one of a few toy line tie-in comics that wound up actually running for a long time, in-continuity, with Marvel keeping the original stuff they made up when they lost the license. Soon, he’s in a real Gulliver’s Travels situation, a giant attacked and roped up by tiny people. But in moments, he’s already smaller than them, and just keeps shrinking.

Like I said, I can’t instantly source everything, but that’s a Gil Kane Spidey in panel 1 if ever I saw one, and the ones in panels 2 and 4 feels real familiar, too. And speaking of Ditko, he gets a whole page here as Spidey’s tormentor is revealed…

Psycho-Man. A particularly wild Fantastic Four villain, What’s his beef with  Spidey? We’ll find out next post. Next up, the Prowler story by Glenn Hurdling, Todd McFarlane & Bob Sharen, which opens with Hobie Brown getting beat up in a martial arts class.

Awkward. And more backstory than I think Hobie’s ever had all in a single page. He goes home and check in with his wife before heading to take Silver Sable up on her offer of employment in WEB 50. And if McFarlane’s previous render of The Prowler seemed like a test run for Spawn, it was nothing on this one.

Sable is impressed with his efforts and sends him to fight ninjas. Even Hobie says that’s cliche in-story, but they’re trying to steal a nerve toxin from Osborn Chemical, so he’s off. And more Spawn with every panel.

Prowler quickly finds out “The White Ninja” is his brother, and deduces this is all just another test, but he’s still mad about before, so he goes for it, anyway.

Strangely, that’s the last page. Did Sable hire him? Why does she care enough to “teach him a lesson in humility?” No idea. I’d bet $1 McFarlane asked editorial for a Prowler short explicitly for Spawn practice and this was just tossed off. Next up, the Sandman story from last issue continues, courtesy of Tony Isabella, pencillers Ross Andru & Alan Kupperburg, Mike Esposito & Renee Witterstaetter. Andru & Esposito reunited makes you think you know what to expect, but this stuff looks nothing like their 70s Spidey together. Sandman is walking on the beach when he’s approached by Wizard & Trapster wanting to get the band back together, and he declines.

Well, that’s rude. Sandy goes home to find Mrs. Cassada crying because they cops came ‘round to question Carlos. He offers to go talk to him. Carlos says the cops want him to help them bust some former friends for a string of robberies.

Seemingly inspired by Carlos’ dilemma, Sandman goes to see Wizard & Trapster. But instead of joining the gang, he tells them their criminal careers are over.

Sandy knocks out Trapster and covers him in his own stupid glue, and then makes it clear if Wizard rats him out to the cops and they end up in the same prison, he’s getting murked, which seems to be a winning argument. Things are looking ok for our reformed hero.

I really wonder about the division of labor between Andru and Kupperburg here. The closing Rocket Racer short, by Isabella, Kupperburg as both penciler & inker, and colorist Marie Javins, about RR fighting some super lame dudes I don’t even feel like talking about, doesn’t look much different. Weird. Wikipedia indicates this is one of the last things he did before dying of a stroke at 66 in 1993. Maybe he was already in a bad way and just did layouts. No idea. This also looks to be his only Marvel work in the 80s. He spent the 80s at DC. But this isn’t the last thing he did at Marvel, and we’ll see that eventually.