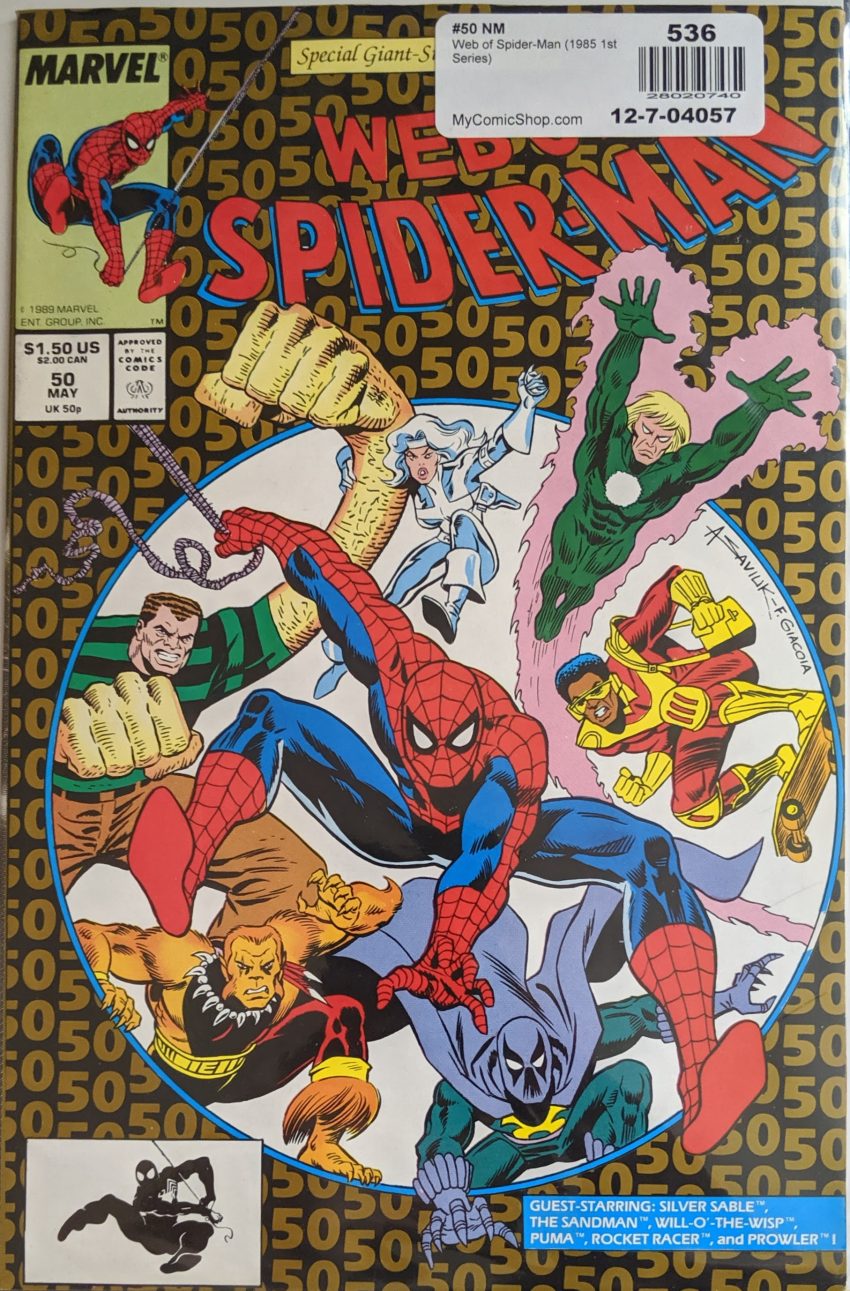 This one has the rather unusual story that I read my cousin’s copy as a kid, and only got my own in 2018. It was not a cousin I saw too often, either, but he read comics, same as me, so when we went to visit every couple of years, I got to see a bunch of books I didn’t have. Look at this random assemblage of guest stars. Was anyone really clamoring to see Rocket Racer again? Bob Sharen is now officially coloring all 3 Spidey titles every month. That’s quite a gig. This one begins with JJJ delighted by photos of Spider-Man brought to him by one Nick Katzenberg.

JJJ walks home from work on cloud nine, but that turns around pretty quickly when a mysterious assailant hits him with gas in his elevator, knocking him out. The next day, that Bugle headline catches a lot of eyes…

Jerko! But no one reacts harder than this Winston Walker III guy, who is furious that his being robbed is front page news, and furious with his staff for letting it happen. While he rages about it, he wonders if someone’s actually after the valuables he kept hidden all these years, and across the street, someone is watching him. Out at Aunt May’s house, cousin Kristy’s just gotten the day’s paper, and runs it up to Peter & MJ’s room, barging right in as they get ready in the morning.

Aw, Mary Jane, you know better than that! Elsewhere, Joe Robertson is reading the news, but he’s got his son Randy furious at him for not taking his plight seriously. Randy says if he’s convicted, he’ll go away for 3 years, and his family can’t lose him. Fair points, and the way this stupid trial is going, he’s right to be worried. Meanwhile, The Arranger goes to see the site of yet another attack on Kingpin’s property by The Lobo Brothers. After being yelled at by seldom seen Detective Frank Farrow, there’s a call on The Arranger’s car phone.

This is really not going anywhere. How many goofy messages written in blood have The Lobo Brothers left by now? Shouldn’t they, like, do something? At the above-mentioned Symkarian Embassy, Silver Sable receives a call from someone who is obviously Sandman. She says she saw the Spider-Man headline and she knows what she’s doing and she has to go. Then her pager goes off. Over at ESU, Peter Parker is asleep in the lab.

As he changes to Spider-Man, still exhausted, our man says he hates that he couldn’t explain everything to MJ this morning, but there was no time. Why’s he so tired? Staying out all night doing Spider-Stuff is, like, his whole deal. Anyway, he’s immediately attacked by The Puma.

Uh, ok, sure. Spidey confirms that he did, in fact, rob Walker, but he doesn’t have time to explain He just swings off, followed by Will O’ The Wisp’s light ball form, not realizing he lost his pager in the fight. Puma has it now, though, and plans to go analyze it for answers. O….k. Speaking of Walker, over at his place, The Prowler is following him, now sporting a gigantic cape like he did when McFarlane drew him, hoping to learn more about what happened, when he’s attacked by The Rocket Racer, who accuses him of framing Spider-Man. My goodness, what a mess. They fight for awhile, crashing through a window and alerting the cops to their presence.

The fleeing would-be heroes get to know each other as they run. Right into a member of Silver Sable’s Wolf Pack, who is revealed to be the guy who was watching Walker’s house earlier. You know where this is going, right? Pretty obvious at this point. Prowler & RR want to know where they can find his boss to ask her some questions, while Spider-Man has taken up tailing Walker. He has a Spider Tracer on his car, and he got a beep earlier because he & Silver assumed Walker would bolt for some house on Staten Island, and he is. He follows the car to an empty pasture, where Walker digs up a cylinder hidden under a big rock, confirming “the documents are safe.” Time for Spidey to jump in.

Action packed, this one. Spidey says he doesn’t have time to explain to The Wisp, and maneuvers him into hitting some power lines, shorting out his powers. Spidey then escapes with the cylinder, as Walker says he’s a dead man. We move our scene to Ellis Island, where Silver Sable is met by Spider-Man.

So now it’s pure chaos as Sandman, Spider-Man, Prowler and Rocket Racer mix it up over a misunderstanding. Silver tries to just leave them to it and deliver to the cylinder to her embassy, but then she is attacked by The Puma. Spidey sees that and disengages from his thing to go kick Puma in the back, telling Silver to run for it, but…

Things are just getting weirder until Spidey manages to catch all his pursuers under a rickety old dock and bring it crashing down on them.

Wrapped up nice and neat. Except JJJ refuses to publish the truth. He says Katzenberg’s photos are “more evocative,” and tells Peter to come back with some pictures he can use. And he sets off Peter’s Spider Sense which, for once in a Gerry Conway story, makes sense, because after we see Peter & MJ having a nice night after he’s explained everything, we see this…

Uh-oh! This will be a problem. But, as we’ve only one post left in this block, The Chameleon’s scheme will have to wait for a later date. Come back next time for something a little different.