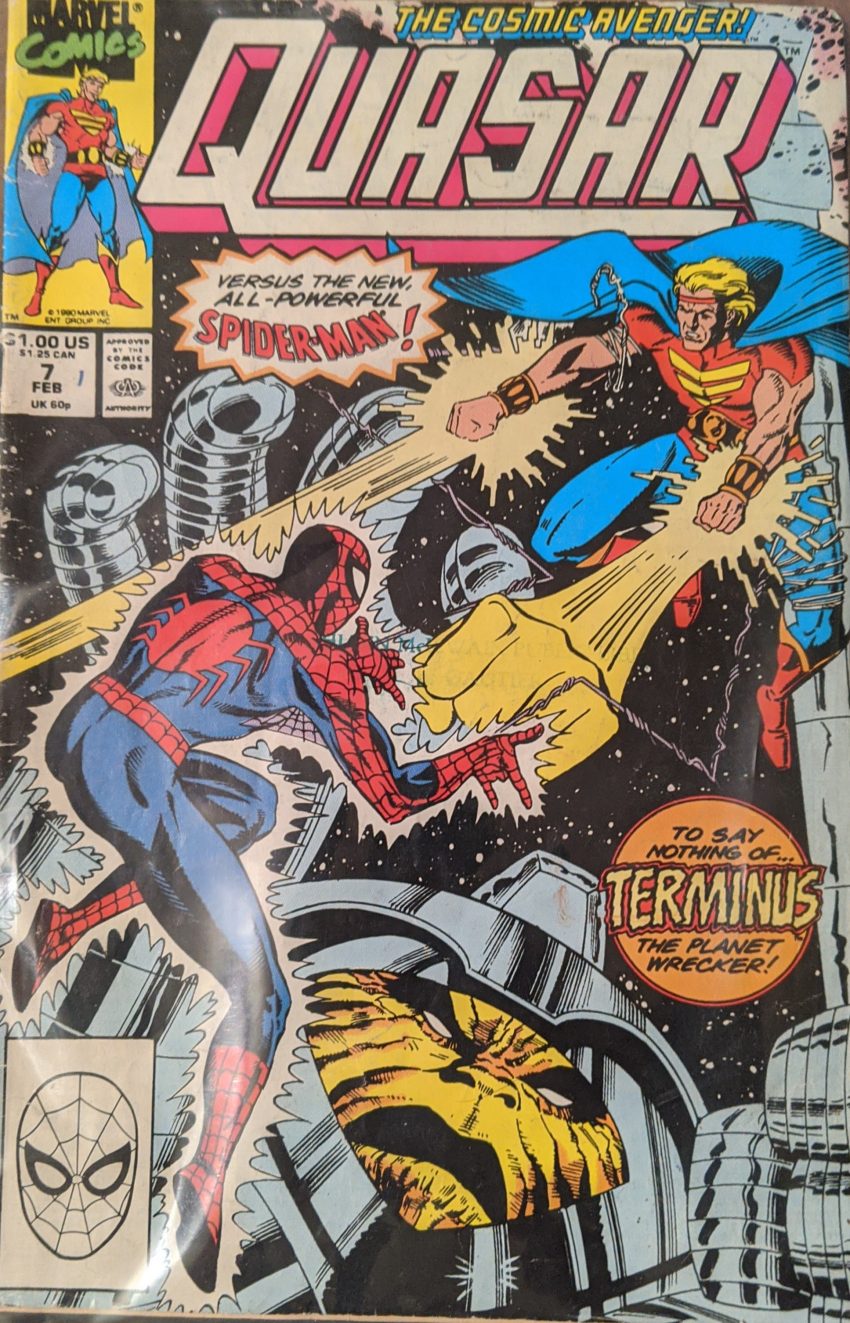 Yeah, Quasar! Last seen around here in MTU 113, I think? Maybe MTU Annual 5. Right before the climax of all this extra power business, “The Non-Mutant Cosmic Superhero” tangles with The Cosmic Avenger. After a decade or more of being an obscure hero, Marvel was weirdly trying to make Quasar a thing in the late 80s, courtesy of Mark Gruenwald, Mike Manley, Danny Bulanadi & Paul Becton. I think all or most of the biggest artists did covers for Quasar… I certainly know I own issues with McFarlane and Jim Lee covers… and here’s Spidey. Anything to give Quasar a push. This is another library discard I bought. First, in The Savage Land, the spear of Terminus, the guy on the cover there, is laying next to his ruined armor from some previous battle when it lights up and begins digging into the earth. Neat. Meanwhile, in Manhattan (But also in a subspace gateway to, uh, space), Quasar is chatting with his mentor, the very bizarre Eon, about their mission to find an alien somewhere on Earth planning to kill him.

Extradimensional, you say? The most concrete explanation offered yet, and it’s not even in Spidey’s own books!

Well, then. Another clue image. With that, Spider-Man flies out of the story for a bit, but don’t fret, he’ll be back. Quasar flies home, thinking that he’s logged Spidey’s energy signature, so if he goes crazy, Quasar will know where to find him. He has a brief chat with his dad, then goes to sleep. The next day, as Wendell Vaughan, head of his own security company, he heads to a meeting with a big corporation. But as that meeting is getting start, Terminus rises up out of the ocean. Wendell registers the incredible cosmic threat and has no choice but to walk out of his meeting, claiming health problems, so Quasar can investigate.

Quasar gets blasted into space, but for the so-called Protector of the Universe, that’s no big deal. He flies back down, trying to absorb Terminus’ energy with his Quantum Bands, but it doesn’t work. Quasar called the Avengers, hoping to get Thor, but he’s not in. So he makes a giant energy signal in the sky telling Spider-Man he needs help. Eon fills Quasar in on Terminus, how he fought the Fantastic Four in FF 289, and Reed Richards used a gizmo to make him sink into the Earth’s core (Seems like a bad idea?). From there, he found an ancient lab made by The Deviants (Those jokers again), got a minion, sent him to fight the Avengers, etc, etc, now he’s back to let you know he can really shake ‘em down.  Also back: Spider-Man answering the summons. Quasar explains what’s up, and soon our heroes are in an energy field underwater, sneaking up on Terminus.

Terminus naturally gets very upset, trying to walk off the platform, so Q just makes it bigger. Then he starts trying to zap the heroes, but he has no luck there, either. And all the while, the keep flying up…

With Spidey out of the picture, the hero of this book sets out to make sure Terminus can’t just turn around and head back. He eventually settles on grabbing the power lance and doing a “quantum jump” through space to separate it from its master.

And that’s that. Gru almost gave the game away! Having fought a space giant, Spider-Manis off to his next adventure, where the truth will finally out about this whole cosmic power thing.