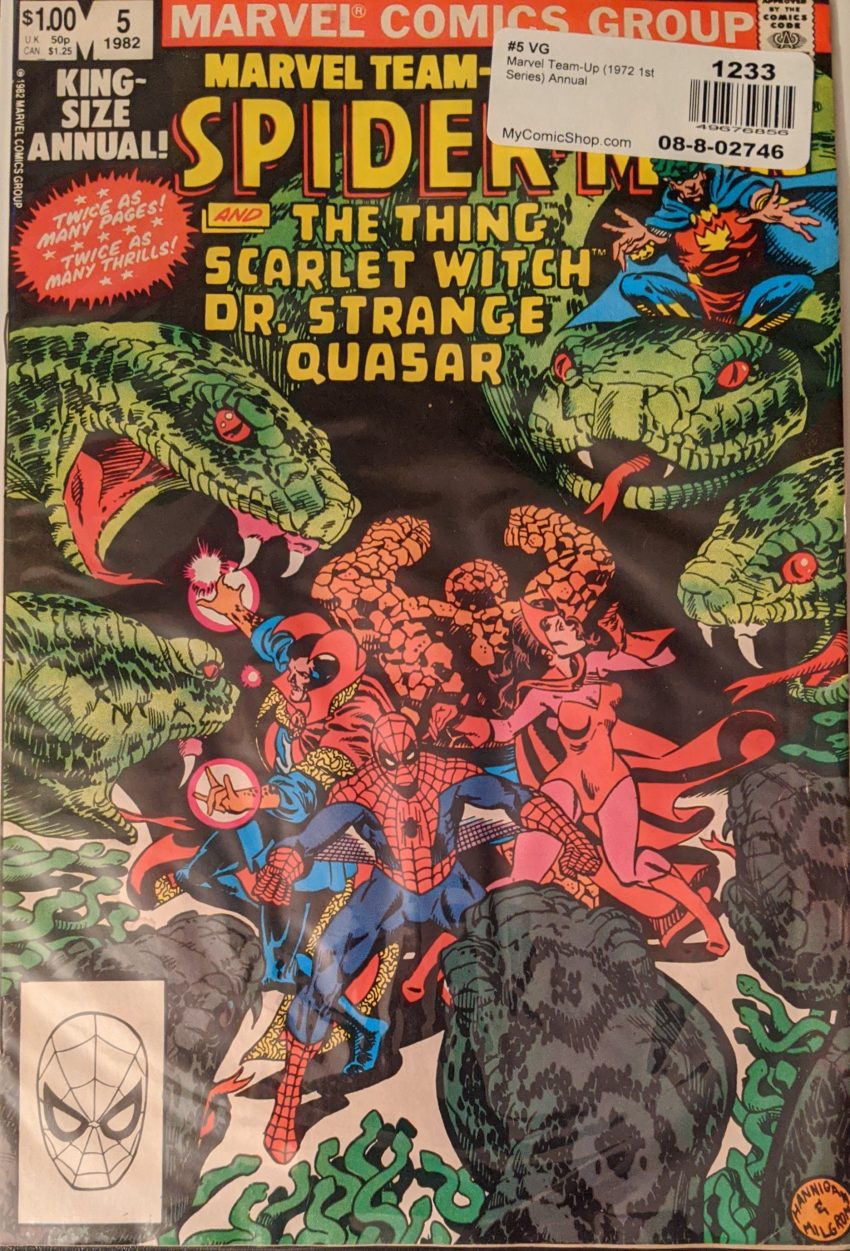 That’s a lot of heroes. And snakes! And I think Quasar is wearing The Serpent Crown up there, so that’s not good. This one’s the brainchild of the great Mark Gruenwald, who provides the story, script and pencil breakdowns. Jim Mooney handles finishes. They get the ball rolling letting us know something weird is going on at super science research spot Project PEGASUS, and Quasar, their security chief, is looking into it.

Not wasting time getting into this one. Did something go wrong in that last panel? Why’s the crown colored in black? At The Baxter Building, we find The Thing expositing that he’s home alone tonight and getting ready to watch “The best fight o’ the season” on TV: K.D. McKeyo Vs. Jocko Squidelli! What names! Unfortunately for him, the phone rings, and out of the receiver pops what looks like a ghost of Quasar, which vanishes without a word. Understandably freaked out, Ben contacts Project PEGASUS, and a curt and weird “nothing is amiss” fro Quasar doesn’t make Ben feel any better, so he decides to go pay Quasar a visit. Meanwhile, a somewhat sick Spider-Man foils a robbery, but is confused when he sees what looks like a giant snake slither out of the alley he’s in.

Dr. Strange gives Spidey a mystical once over, and is surprised to find his aura is being coiled up in a giant snake. I, too, am surprised! This apparently stems from a Spidey/Dr. Strange team-up we’ve not covered yet that happened a few months prior to this issue.

The lady yelling during Indiana Jones is The Scarlet Witch. In a previous adventure, The Serpent Crown tried to possess her, too, and now she’s somewhat tied to it. She knows it’s active again, and leaves The Vision to go see what’s up. So now all the heroes are converging on Project PEGASUS, though not as a team. And things are getting weird where our hero is concerned.

Everyone’s pretty casual about Doc Strange knowing Spidey’s identity. While Spider-Man drives, Strange sends his astral form traveling through the timestream to learn more about the snake situation, and when he returns, he tells the story of Set, an ancient snake god almost as old as the Earth itself. How Set fathered a race of snake men who were later fought by Kull,  Robert E. Howard’s precursor to Conan, which led them to make a deal with The Deviant Lemurians of Jack Kirby’s Eternals, creating The Serpent Crown. Some of this was probably covered when we talked about Atlantis Attacks, I don’t remember. Set imbued the Crown with his mind, Lord of the Rings style, but then the cataclysm that sunk Lemuria and Atlantis happened, so the Crown was lost for awhile. Conan himself killed the last of the snake men, and things were seeming pretty good. Centuries passed, the aquatic Atlanteans like Namor came on the scene, a renegade tribe of them found The Crown and gave it to the ruler of the now also aquatic Lemurians, but then it was stolen. A bad guy from Sub-Mariner comics wound up with it, but killed himself, eventually Atlantean villain Warlord Krang got it.

Mark Gruenwald lllloved continuity, and here he is, putting together almost certainly the first timeline of this storied Marvel artifact. Strange says The Thing took The Crown to Project PEGASUS, and now here we are. Speaking of Ben, he’s just broken into PP, and is looking for trouble, and he finds it in the form of a now-scaly Quasar. They get to fightin’, but Ben’s no match for Quasar’s power coupled with that of The Crown. He snares Ben in an energy trap and says he’ll be let out once he’s joined the cause. Hours later, Spidey & Strange arrive at the site. Strange astral projects inside to look around, and Spidey is soon busy protecting his body from Project PEGASUS security.

The gang’s finally all here. And things are bananas. The big brains at Project PEGASUS, now entirely in the service of Set, have used “dimensional cannons” to find Serpent Crowns from all across the multiverse and steal them. Almost everyone in the facility is now wearing this evil mind control hat, including Quasar, The Thing and Doc Strange. The head of PP says they need 777 Crowns to then instantly summon all remaining Crowns, and then they can ressurect Set, and then they’ll revert the planet to its primordial environment for him, and they’re only 3 Crowns short. So, you know, no pressure, Spidey & Wanda.

Spidey takes off, feeling bad about it, and Scarlet Witch is soon brought down by the psychic power of The Serpent Crown multiplied. As the boss man mentions “The Thing and the cloaked man” somehow rejected the influence of The Crowns, Quasar heads out to find Spider-Man, flying into a web tripwire and nearly garroting himself. Spidey whacks him in the head with a web ball for good measure. Then he goes back to hiding, not sure what else to do. Meanwhile, the snake dudes find Wanda rejecting The Crown as well, and decide to just put her in stasis. Then we learn Dr. Strange has been casting spells on the heroes to keep The Crown from effecting them, but hasn’t worked out much of a plan beyond that.

The pile of Crowns merges into one giant Crown (Hey, ok, that’s what it looked like later in Atlantis Attacks, I’m pretty sure), and Strange takes the chance to revive and free Ben, who falls right onto the big Crown.

Uh-oh! Meanwhile, traveling through the air ducts, Spidey stumbles on a room meant to hold The Cosmic Cube, which Marvel movie fans will know better as The Tesseract. Spidey remembers Captain America talking about it one time, and thinks he could use it, but it’s not there. He seems to recall seeing it in the mechanism back in the big room, and takes off again. He runs past Quasar’s still unconscious form and notes he has no Crown now, then runs into the big room just in time to see Dr. Strange failing to stop The Crown from eating Wanda.

Spider-Man! Wielder of The Cosmic Cube! Now he’s one of the most powerful beings in the universe! But The Crown just eats him immediately, anyway. Strange begins to despair, his attacks still having no effect on the thing. But, come on…

Take that! But the evil presence of Set isn’t gone yet, so the heroes combine their wills into The Cube again and Dr. Strange throws in some magic for good measure, so they can banish Set’s consciousness from this plane of reality. Hey, be thorough, I always say.

Why is Spidey the only one whose outfit got ruined? Ah, well. The day has been saved. But of course, neither Set nor The Cosmic Cube can be kept down for long. Even as I type this (In January of 2020), Marvel is running a Serpent Crown crossover. Nothing is ever over in The Marvel Universe.