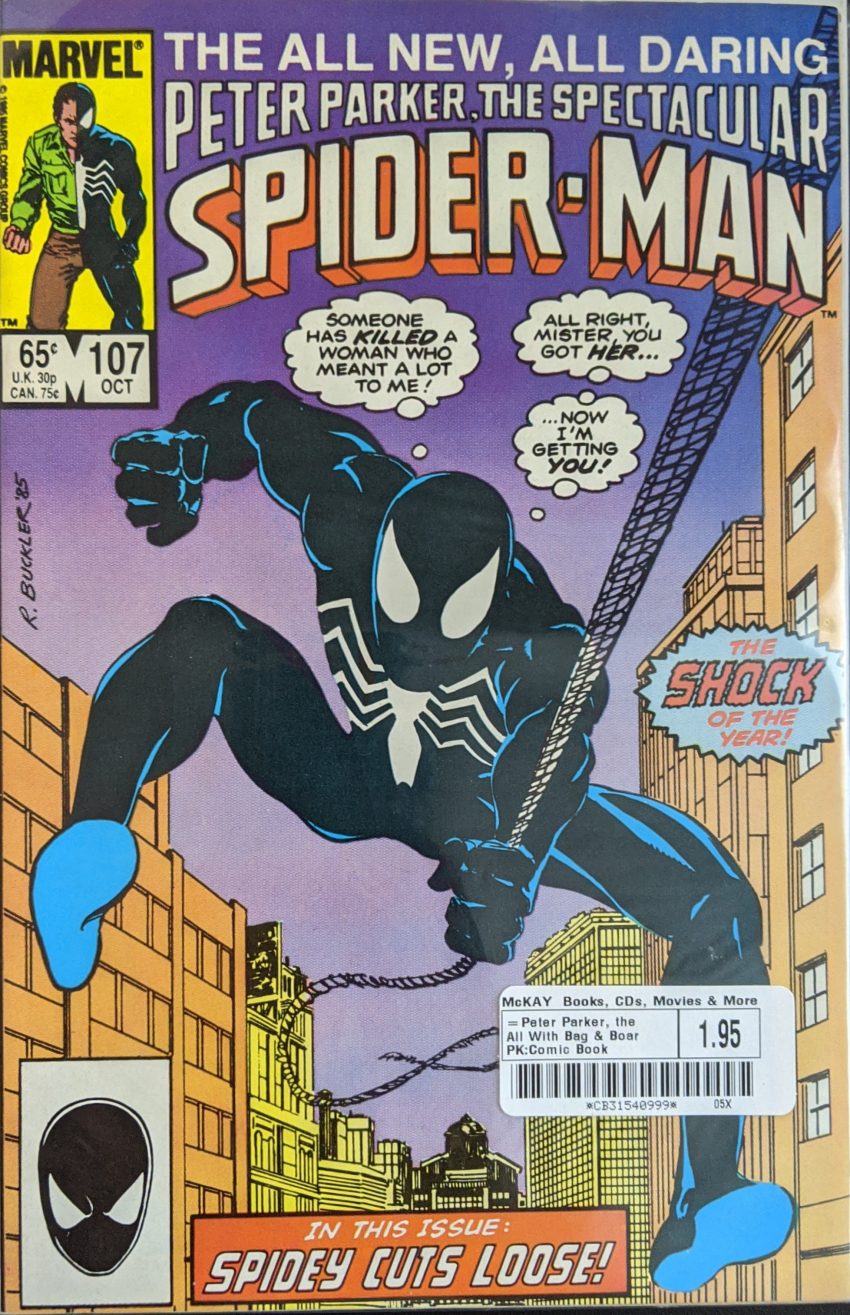 It’s All-New & All-Daring, folks. I had previously assumed this would be a pricey issue. $1.95. I guess it’s not historically considered that big a deal. And yet it was one of the earliest Spidey stories collected into a book, because it fits into the “comics aren’t just for kids!” ethos of the mid-80s. Serious Literature, y’all. But not the stupid kind, like Kraven’s Last Hunt, thankfully. Anyway. Peter David, Rich Buckler, Brett Breeding & Bob Sharen kick off the beginning of a 4-part saga here, and they tip their hand early.

And that’s why this story is called The Death of Jean DeWolffe. Not the most heroic way for her to go out. But we’re only 3 pages in. In the city, Peter Parker runs into Ernie Popchick, one of the residents of Aunt May’s boarding house, on a trip into the city to cash his social security check. And as soon has Peter turns his back, the old man is assaulted by goons. The grim and gritty 80s are here!

Spider-Man angrily beats up the gang, but one escapes, as one tends to do.

The 80s! So mature! The goon goes sailing toward an arriving police car. The cops have little sympathy for him, but one of them wants to let Spider-Man know Mr. Popchick is on his way to the hospital, but he’s going to be ok. And then he asks if Spidey’s heard Jean DeWolffe is dead. He had not, and it hits him hard. But we leave him immediately.

JJJ says people like Hitler deserve to die, but whatever Spider-Man is, he’s not that bad. Robbie says that’s the nicest thing he’s ever said about Spidey. Then Reverend Jackson Tolliver shows up. Due to this blog being out of order, we’ve seen him in a later appearance in Web of Spider-Man 41-44, but this is his first. He’s just setting up in NY and wondering about getting an article in the paper. As he talks to JJJ, we catch back up with Spider-Man, who’s gone to Jean’s police precinct to find out who’s heading up the investigation. He’s told that’s Detective Stan Carter, who just left, but he can catch him if he hurries. The cop describes Carter’s car so Spidey can find it in traffic.

There was an unspoken thing between the two of them. Different writers handled it different ways, and we’ve seen a lot of that on this blog. Now we cut away to Daredevil. It’s the next day, and he’s on his way downtown to represent his clients in court as Matt Murdock. And his clients are the guys who beat up Mr. Popchick. Matt successfully talks the judge out of setting a high bail for them, and that’s it for today.

20 pounds of what now? Matt and his old teacher talk a little more, but when Horace goes to the bathroom, Matt investigates the next room. He senses someone in there, and that someone is The Sin-Eater. Matt says not to hurt him because he’s blind.

Woof. To be continued, of course. Women getting killed in media, especially pre-21st century media, is always dicey. In this particular instance, tho, it’s not quite as cliche as “the girl gets killed to motivate the hero.” She wouldn’t die on page 3 if that were the case. But it’s still not great. There were too few good female characters outside The X-Men running around to kill Jean. Coulda been DA Tower, Lt. Keating, Sgt. Snider. Plenty of male cops running around Spider-Man’s world, but only one lady. Ah, well. It is what it is, and it’s just getting started.