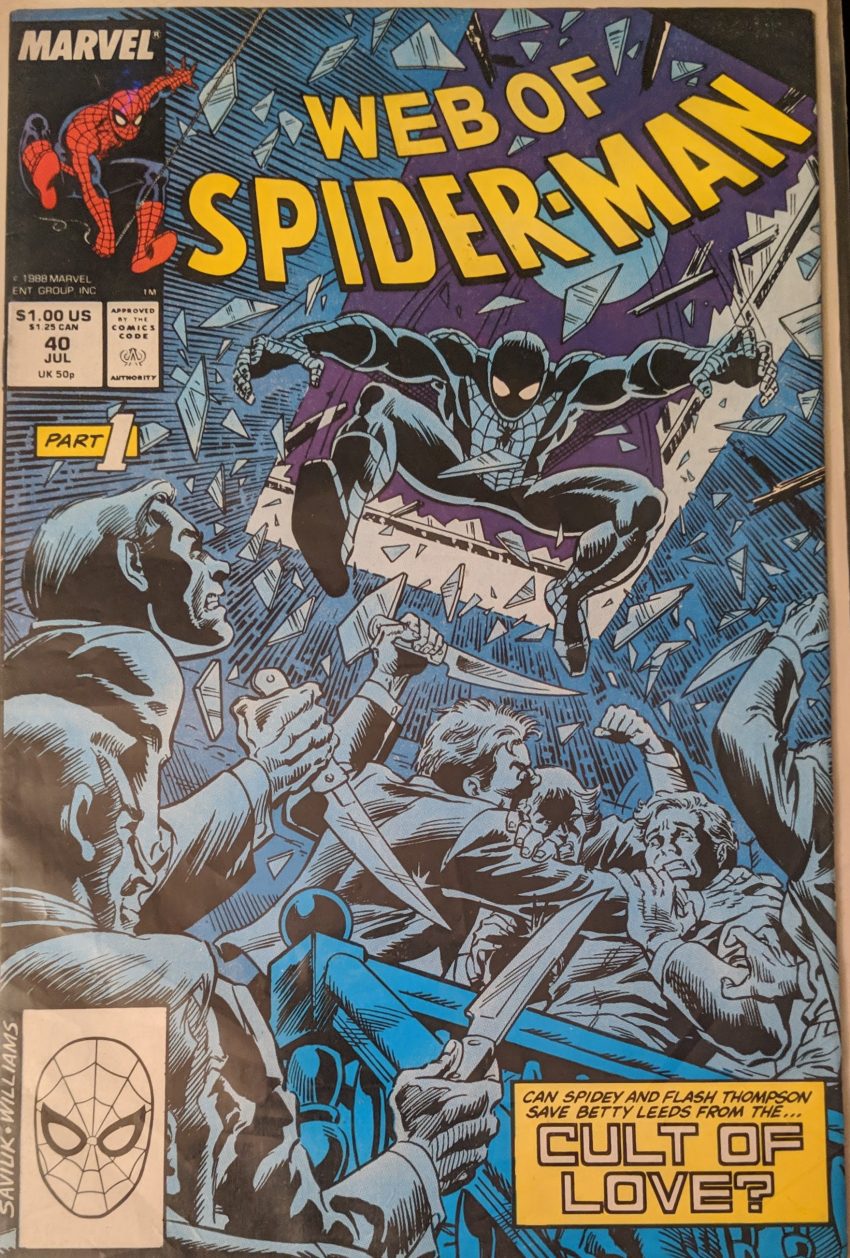 Well, I sure hope so! It’s the return of those “Part 1, Part 2,” etc banner things from the 4 months of weird crossovers. This is the first book on the blog that I’ve not read before since… well, WEB 39, but that’s been awhile now. It’s also the debut of new “regular” writer Peter David, recently of TAC. He’s not actually gonna be here for long, but here he is, joining already established penciler Alex Saviuk, inker Keith Williams & colorist Janet Jackson (As ever, not that Janet Jackson). David seems to be the only one interested in several of the threads from the Hobgoblin era, beginning the issue with Flash Thompson on his way to see Betty Brant at The Bugle. He’s looking forward to telling Betty he’s got a new job coaching kids at the Police Athletic League and he thinks his life has been on the upswing since he was cleared of being The Hobgoblin (Almost 2 years prior in real world time, but probably a few months in comics time). He finds her in the lobby talking to this guy:

Well, ok. What a cool guy. Several weeks later, We join Spider-Man, swinging by Betty’s place and deciding to drop in on her as Peter Parker. As he changes into his regular clothes, he thinks about various plot points from the last time David was working the Spider-Titles. This is feeling like everything since ASM 290 didn’t happen. Like these were his next Spectacular scripts when he disappeared off that book. Anyway, Peter knocks on the door and is pretty shocked to be met by a realtor. She assumes he’s her appointment and tries to show him the apartment. Peter is very confused and escapes as soon as he’s able.

Uh-oh. Spidey makes Flash leave, helps the guy pick up his pamphlets and sends him on his way. Then Peter Parker goes into The Bugle carrying one of said pamphlets and shows it to City Editor Kate Cushing, who is horrified to see it advertises “The Students of Love.” She says it’s a religious cult. Kate explains that her older sister joined a cult when she was younger, a tragedy that tore apart her family and partially inspired her to become a reporter. Peter mentions the realtor and gives Kate her card, leading Kate to loudly summon Ben Urich across the newsroom.

Kate Cushing plays it tough, like JJJ, but is a softy underneath, like JJJ. Meanwhile, Flash is tailing the cultist, who stops to make a phone call and then heads into the subway. Soon Flash is entering a dilapidated tenement, having lost track of where they even went but never losing sight of his target. Then the door slams shut behind him.

I just thought that was a nicely executed sequence. Spidey and Flash (But, you know, mostly Spidey) fend off a small army of weirdos and eventually route them. Spidey reveals he’s had a tracer on that dude since Flash was beating him up earlier (as if we hadn’t guessed) and wants to follow him to their headquarters. He takes off to do just that, watching the guy hop in a van and speed off, and hitches a ride on top to see where they go. The van eventually pulls into a fancy estate in New Jersey, and Spidey hops off to avoid being spotted.

I don’t think a roomful of brainwashed regular people is much of a threat to Spidey, but what’s gonna happen to poor Betty? Come back next time to find out! In the letter column, Spidey group editor Jim Salicrup notes Peter David is only here for 5 issues because he’s so busy, but they’ve already chosen the next regular writer. He won’t say who it is, though. I know just from reading comics in this time period, but we’ll see soon enough.