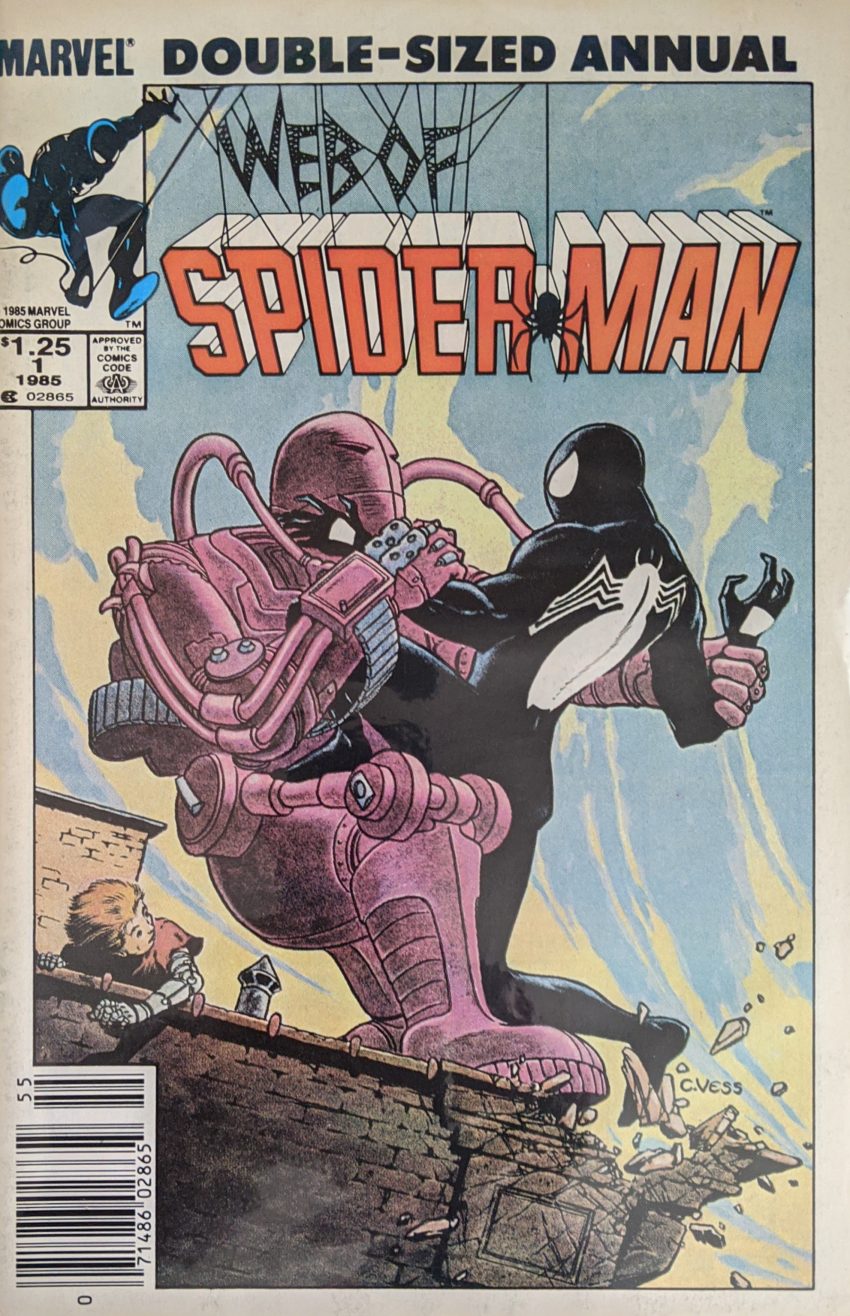 Yet another great Charles Vess cover. I have no idea what’s going on here. I believe it’s Ann Nocenti’s first Spider-Man job, with line art by Tony Salmons and colors by Bob Sharen. As it gets underway, Spider-Man smashes through a window to stop a robbery at a jewelry store, but is surprised to find it’s being robbed by a bunch of weird robots.

The now big robot emits a high pitch sound that disorients Spider-Man, making it hard to concentrate and baffling his Spider Sense. Pretty good move by the bad guys. He tries to fight the robot, but he’s really in no shape to do so anymore. As it catches up and ties him up, he decides to play dead to see where things go, but then the robot deploy’s Spider-Man’s true archenemy: gas.

The kick in the head doesn’t stop the rest of the robot from making off with the jewels. Spidey eventually recovers and leaves with the robot head, thinking about how impressive the robots were, and lamenting that his life didn’t take him into the science field he expected. Meanwhile…

As you might expect from a comic book, that kid has a room full of electronics and is working on an exoskeleton to give himself a full range of movement and probably super strength. He calls the exosuit “Future Max.” Then Beatrice gets home. She is apparently a girl who lives on the other side of his wall who he’s been talking to. She says she did something for him.

The robot, of course. Max says he’ll just build it a new head. Then we switch to following some kind of con man as he tries to convince a lady to let him help her cross the street so he can steal from her purse.

There’s a lot going on in this one. So we move to the science fair, where Max meets up with Chester, another brilliant kid, this one pretty pompous. Chester has a couple of kids lugging gear for him who clearly don’t care to be there. Guess who else is there?

So the con man convinces the kid to build a super suit prototype to fit him, which he can show to his “friend” Reed, and then they’ll meet. The kid believes him, and goes home and disassembled Future Max to make the suit. Back at his place, Peter Parker examines his robot head, and quickly realizes it was built by Max. Soon, Spider-Man is swinging off to pay Max a visit. But Max is outfitting the con man in his supersuit. The con man brought him various weapons to incorporate, from “investors” (Mob ties, he thinks). The suit makes him kinda look like a purple version of Iron Man’s first armor. He tries out some of the gadgets, but then someone’s at the door.

Spidey and the con man have a running battle through the air as Spider-Man tries to take the fight away from people and the goon revels in his newfound power. Spider-Man takes the fight to an abandoned building and dodges around until the suit runs out of ammo.

Spider-Man says this whole block is scheduled for demolition. That seems crazy. First ASM 270’s whole neighborhood scheduled for demolition and now this. Was the gentrification of New York really that wild, or is that just an easy way to blow stuff up in a comic book? Anyway, they fight through several more abandoned buildings, the guy unleashing flame throwers. He keeps switching to talking like different movie characters until Spider-Man manages to web his helmet.

They keep in fighting until Spider-Man finally has him where he wants him. Except…

Spider-Man swings the suit into a water tower, shorting it out. He pulls the guy out of it and webs him up for the police, feeling bad for him the whole time. Clearly, the guy is not all there.

You know it’s not going to be a run of the mill story when Ann Nocenti is involved, but this was a pretty weird one, even for her. A lot of themes in there to grapple with, but few real resolutions. Wild issue. There’s an ad in here for the Longshot miniseries, which introduced the character. It’s by Ann Nocenti and features the debut of the incomparable Art Adams. And in it, Longshot met Spider-Man, even. Nocenti & Adams made a good team. As we’ll see when we make our way to Web Annual #2 someday. But we’re gonna wrap up this block with a shocking 4-part story in Spectacular.