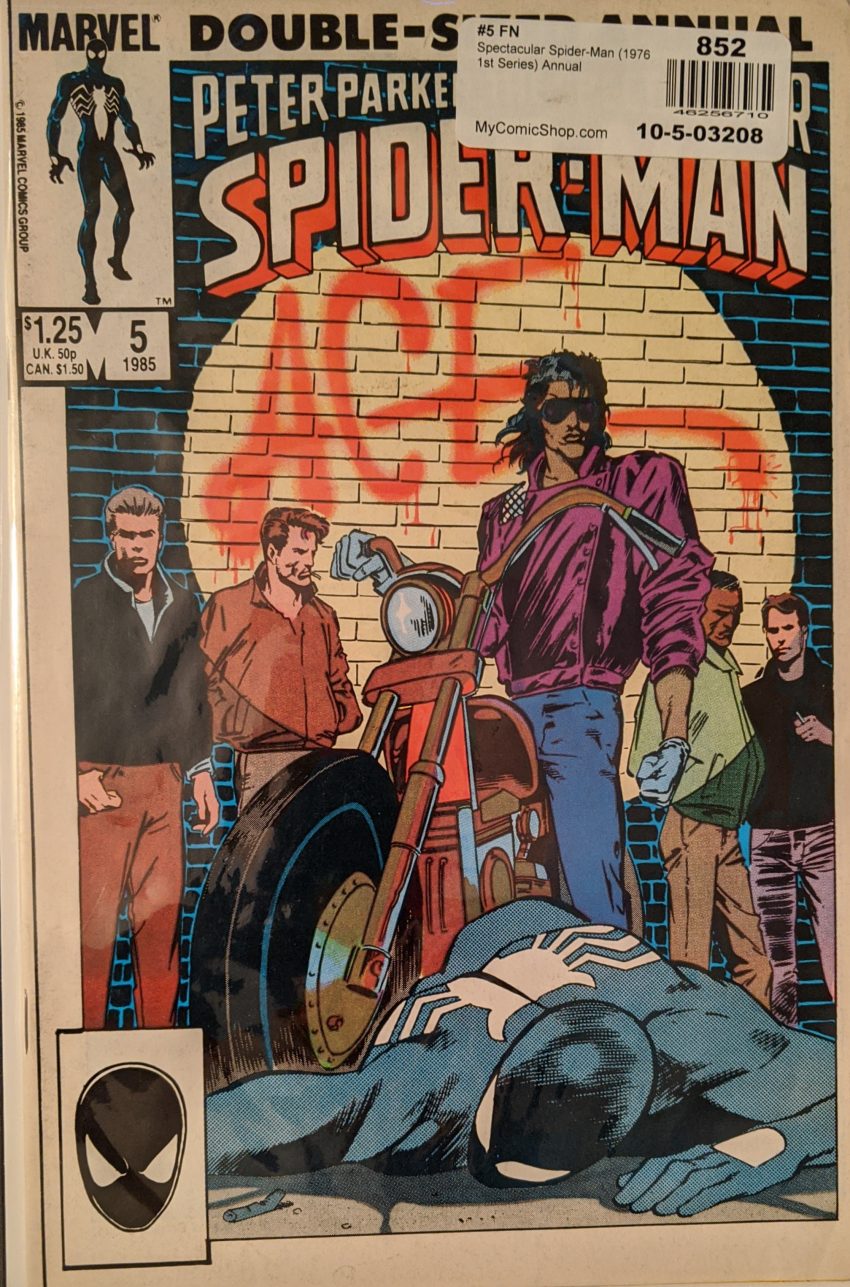 This is going to be pretty much exactly what it looks like, so just strap in. About to be a Purple Rain of pain on Spider-Man. It’s Peter David, Mark Beachum, Joe Rubenstein & Bob Sharen on board for a story that begins at the scene of a bad shooting.

Dragons and Reapers! Add them to the list. The owner of the restaurant regains consciousness and names some of the kids who shot it up. As Spider-Man leaves the scene, he takes a couple pictures of Ace, from the cover, after spotting him in an alley. But then Ace spots him. Spidey swings away, and then Prince, I mean Ace, drives off. Past Jean DeWolff, who recognizes him. We follow Ace as he drives recklessly around town before entering a room in an apartment building. A child inside reads The Wizard of Oz, and Ace throws a knife!

She is Rosie, Ace’s little sister. Rosie talks about wishing she lead a life of adventure, and then Ace goes to see their bedridden Mom in the other room before returning to talk to Rosie some more. Then we jump to the next afternoon, as a very overdressed Peter Parker approaches The Daily Bugle.

Beachum is being all the way creepy with the women in this. No way to treat Joy Mercado, fresh new reporter. The casual aside that she covered Vietnam does not fit my conception of the character or her age at all. Interesting. Meanwhile, some dudes are harassing a guy in a wheelchair on the street when Ace pulls up and they get scared.

There is no way that rifle was hidden in that wheelchair. We move to the courtroom where Ace’s brother and his buddy are being arraigned. The judge says the only witness they have, the restaurant owner, is in a coma, so the case is not too strong. He orders the dudes held on bail and the courtroom lets out.

This is a confusing page. I’m not sure the prosecutor with a collar on her shirt and the prosecutor without were intended to be the same person by Beachum. He was too busy drawing butts to be more clear. Outside the courthouse, Peter shows Joy a picture of Ace, who he tells her was at the scene and who she recognizes. Peter asks who Ace is.

Weird hand gestures. Peter fights some Dragons as two of them start to drag Joy away, and he’s about to cut loose when Ace shows up. Ace tries to run him down, so he uses his Spider Sense to pretend to get hit and then fall down and hope everyone thinks he got knocked out. The goons drag Joy away, and Peter is waiting to change to Spider-Man, but Ace comes to check him out before taking off. Soon, Spider-Man is swinging toward the Reapers’ hangout thanks to a spider tracer (But the goons were wearing Dragons jackets?). He sets up his camera and…

Ace seems able to sense danger, like Spider-Man. As gang members watch and jeer, Spider-Man and Ace try to fight each other, neither able to connect. Spider-Man finally shoots a web low, making Ace jump, then one high, making him duck, so he’ll be wide open for a tackle, but when Spidey lunges, Ace cuts him. Things are looking weird when they’re stopped by the screech of tires.

Inside, Spidey finds Joy cradling a guy who’s been shot in the fighting. She says he wanted her to interview him, so he could tell her what it’s really like, but then the shooting started and he was too close to the window. Ace walks in, and Spider-Man berates him for shirking his responsibility. Ace goes to Ryker’s to see his brother. His brother is in high spirits, unconcerned about being in jail, until Ace tells him Sammy got killed.

And on that note, we’re out of pages. Strange comic. Really trying hard to sell this Ace as a cool, mysterious character. Not necessarily succeeding…