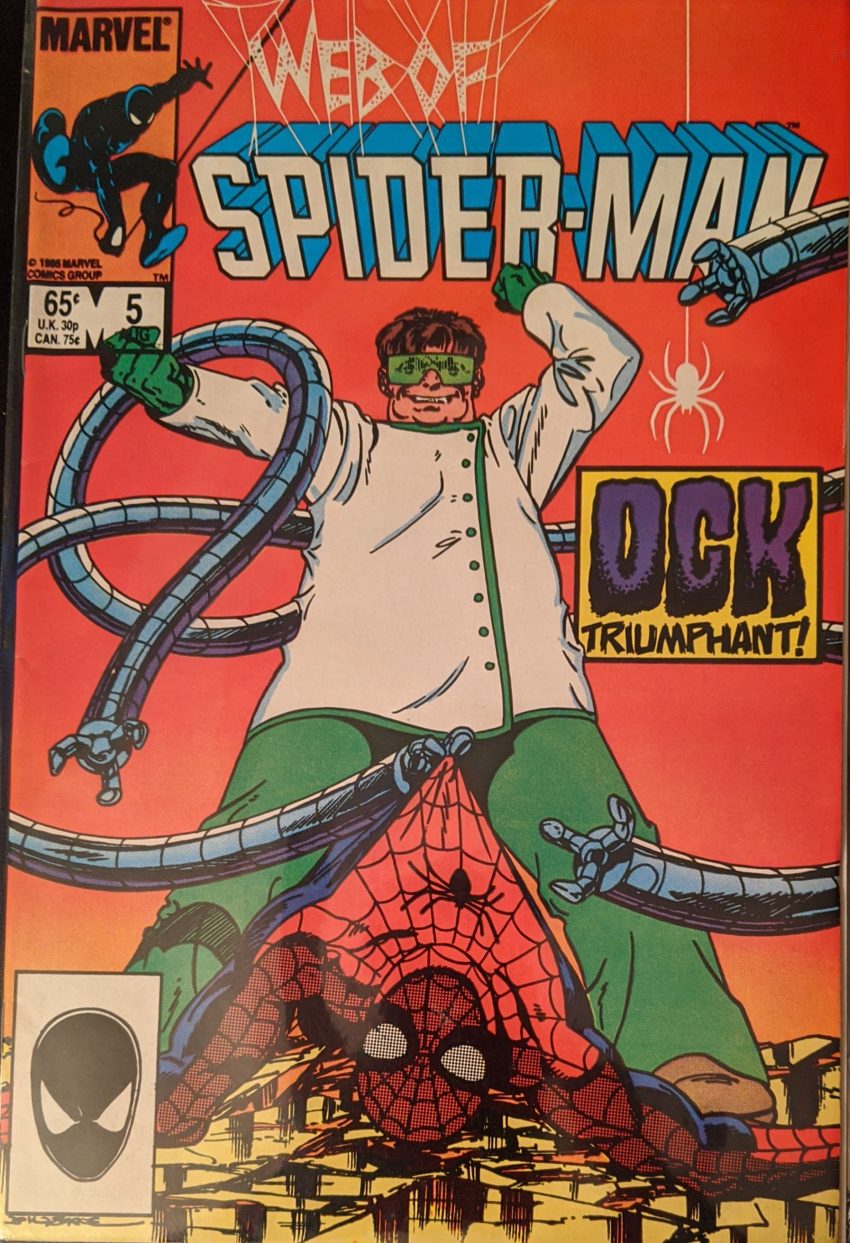 Doc looks so happy. His hand going into the corner box is strange. This mad scientist look is better than spandex… but only a little. In an odd turns of events, Jim Mooney pencils this one for Greg LaRoque to ink, with the rest of the team the same as last issue. Christopher Priest, editor of the Spider-Titles at this time (Under the name Jim Owsley), has written that he proposed this job swap because the 2 artists were complaining about each other and he wanted them to walk in each other’s shoes, and that he really liked the results. Spider-Man is swinging around looking for Doc Ock, who’s apparently gone on a massive crime spree, but seems to be avoiding our hero. He’s so lost in thought that, as 2 sign painters suddenly fall off a billboard, he saves them more or less on autopilot, not even speaking to them. Elsewhere, 2 of Ock’s goons are getting a remarkably lifelike Spider-Man robot up and running for Ock to fight, discussing whether he’s cracked up or not. Ultimately, all they care about is the chance to make some money.

Ock defeats his robot, but his goons aren’t sure he’s ready for the real thing. Speaking of whom, we jump to tomorrow, where he’s now in the black suit and headed home after saving Rocket Racer in the previous post. He calls Aunt May but gets Nathan, who confides in him that they’re having money trouble even though May didn’t want him to. Peter resolves to somehow make more money to help, which of course leads him to The Bugle, where a noteworthy character is introduced.

Kate Cushing! I’m always kind of surprised when a big name character isn’t introduced in ASM. Peter goes to an ATM to get his last $23.50 out to buy film. The machine messes up and gives him $123 instead. He wishes he could keep it when Doc Ock and his goons show up to rob the place in broad daylight. Peter ducks out of the way of a blast with his Spider Sense, and his new-found riches blow away. That was complicated. The bad guys don’t notice him as they swarm into the bank. While Ock and half the goons head down to the vault, Spider-Man takes out everyone in the lobby.

Ock is furious when he finds out Spider-Man was there and no one told him, but then the cops show and the villains all leave. One of them with a spider tracer on his belt. Meanwhile, Spidey’s on to his next appointment, breaking into that embassy for “Kathryn” Cushing. He sneaks in through the air vents and gets some shots of whatever’s the deal in there (How’d he get film if his money blew away?), but then he hears some guards take up positions by the air vent and doesn’t know how he can escape. While he’s stuck in the embassy, Doc Ock attacks The Daily Bugle.

Now she’s Katherine Cushing. Maybe that’s why they eventually switch to just Kate. This is a very 60s story beat. Elsewhere, Spider-Man is finally free to leave the embassy, and calls in to The Bugle only to find out the bad news. Spider-Man tells us he can cover 2 miles in 3.3 minutes as he swings into action. That’s very specific. Duly noted. Ock gets tired of waiting, tho, and orders his gang to leave, taking a hostage in the process. You guessed it, it’s Kate Cushing. When Spidey arrives and get the news, he takes off after them. We’re told it’s a long search before he gets a ping from his tracer. He says he’ll make a phone call before going in. Inside, Ock is once again fighting his Spider-bot.

Ock freezes and goes into a sort of trance, like we’ve seen in later comics. His goons rush in to fight for him, but Spider-Man convinces them this is not a guy who’s gonna be paying them well under the circumstances. The cops show and arrest all the goons, thanks to Spidey calling them in advance. He decides he’s going to take the chance to completely destroy Ock’s arms, but a guy with the cops says no.

That “take some antibiotics” joke is the most solid Spider-Man gag I’ve seen this whole block. The Bugle is looking extra tall on the next page…

There you have it. Kate Cushing’s tough personality in place, and Doc Ock laid low until ASM 296. Solid bit of comics.