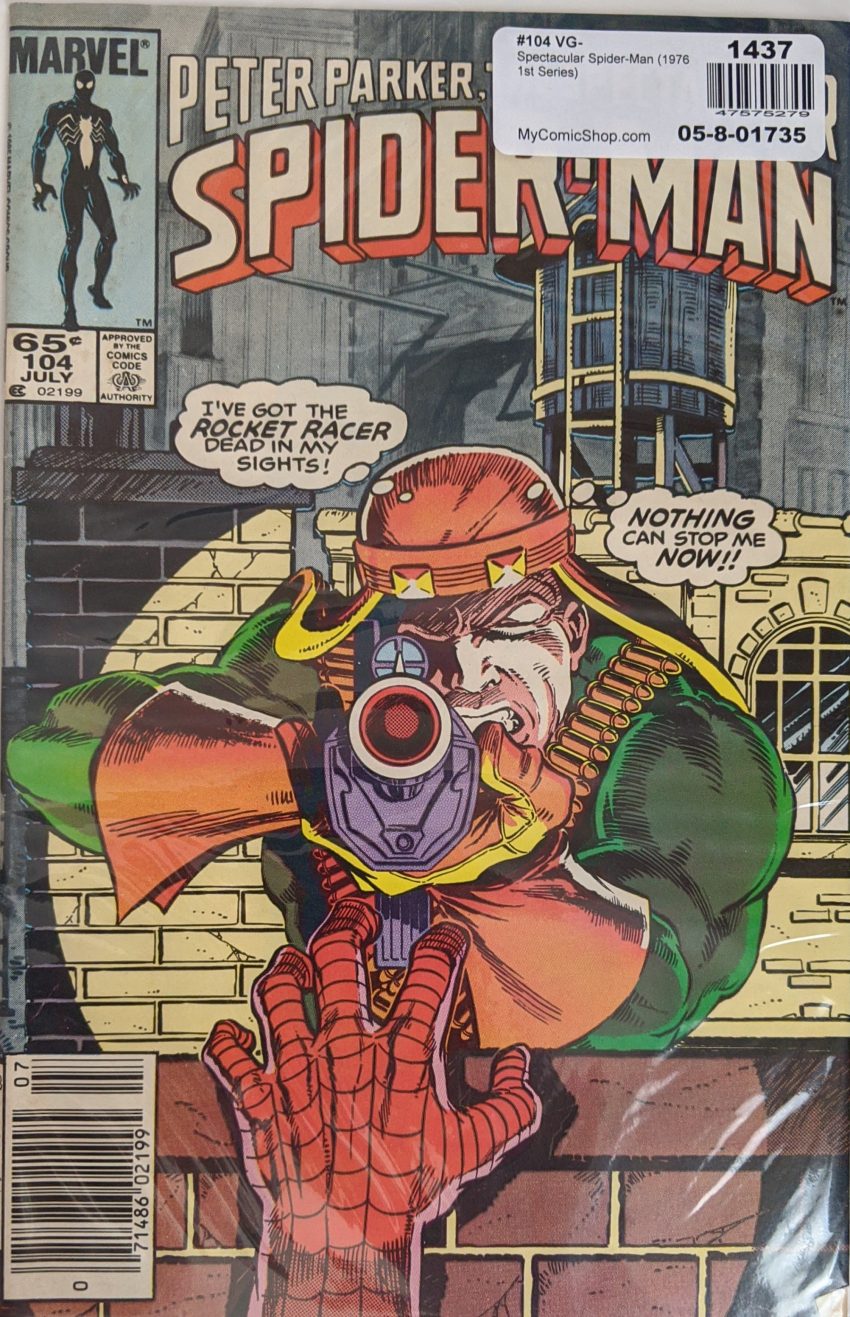 Who’s this lame? When I see this cover, I always think it’s Loki for a second. And Rocket Racer is coming to town, great. It’s a fill-in! This one’s written by Bill Mantlo, another guy who just can’t stay away. Rendered by 2 new names to me, Vince Giarrano & Pat Redding. Colors by good ol’ reliable Bob Sharen. It opens on Rocket Racer robbing an armored car as Spider-Man happens to pass by overhead, what luck. Spidey recaps their previous battles quickly before going after him. I guess RR hasn’t appeared since way back in ASM 183, but it seems few villains get left in the past forever.

They mix it up for a couple of pages, RR’s money bag splitting open and spilling cash everywhere for no obvious reason in the process. Then the reason Rocket is in such a hurry appears.

A guy whose name is just “The Bounty Hunter?” How generic can it get? Now it’s a battle between “The Bounty Hunter” and Rocket Racer, with Spidey left in the dust since they both have rocket transportation. Bounty Hunter proves to have a ton of gimmicks, like an “anti-mag-net” that doesn’t work on Rocket’s magnetized shoes, heat seeking missiles and various other things. Eventually, RR’s luck runs out.

Rocket Racer escapes and Bounty Hunter sets off a flare in Spidey’s face, blinding him to effect his own escape. Spidey decides to get some background on Rocket Racer before he goes looking for him, and heads to the morgue at The Daily Bugle, where he says he’s never seen Rocket’s family before in spite of that time he literally gave Aunt May a heart attack because RR’s mom happened to be sharing a hospital room with her and he busted in to confront the villain. Seems a memorable event. Anyway.

It’s a junkyard where Rocket Racer scavenges for parts. Spidey is all-in on helping him now, seeing that life has dealt him an unfair hand, but when he finds him, he’s already got The Bounty Hunter’s gun in his face. So Spider-Man puts his foot in that guy’s face, and the fight is back on. Bounty Hunter deploys Spider-Man’s most dangerous enemy, gas.

The Bounty Hunter shoots RR’s rockets out of the air, and then uses some corrosive rounds to melt his boot clamps. This guy has a lot to work with. But when all seems lost…

So that’s the end of Rocket Racer’s criminal career and the first steps toward his infrequent hero career. Considering how often Gerry Conway uses him later in the 80s, this is rather incredibly a pivotal moment. In a truly shocking turn of events, the internet tells me The Bounty Hunter never appeared in another comic. I mean, he’s pretty lame, but that hasn’t stopped so many others from coming back. If The Mindworm could get a second issue, seems like this guy could have.